Get email updates from Ronda:

GenCyber Camp comes to the College of Education

The College of Education's Instructional Technology Center hosted three cybersecurity/computer science summer camps sponsored by a GenCyber grant through the NSA and NSF. The goals of the program are to help all students understand correct and safe online behavior, increase interest in cybersecurity and careers in the cybersecurity workforce and improve teaching methods for delivering cybersecurity content in K-12 computer science curricula.

Two camps were held for K-12 teachers, where the primary goal was to complete tasks relating to cybersecurity and computer science that could be modified to the grade level they teach and integrated into their instruction. Teachers from 18 schools in 11 school districts from S.C. and N.C. participated in the camps. They produced more than 50 original activity ideas during the camps that they have access to use throughout the year.

One camp was held for students in rising 7th-10th grades. The focus for students centered on online safety with subjects such as location-based apps, cyberbullying, sexting and sharing information through social media were integrated throughout the week. The students represented 15 schools in 11 school districts from South Carolina and North Carolina.

Guest speakers for all camps included Tom Scott from S.C. Cyber who conducted a network protection activity, and Special Agents Duncan and Colin from SLED who spoke about the need for being safe when using technology. Zackary Hubbard, an instructor at Rowan Cabarrus Community College, and Hansel Wei, a student and computer science peer tutor at the University of North Carolina at Charlotte, both demonstrated the insecurity of open wireless networks and how to ethically hack a network. Candace Martin and Juan Pabellon from EITS in Fort Mill, South Carolina discussed the future of careers in the IT field.

The camps were designed so that teachers and students were active participants throughout each day, completing activities such as presentations, breakout boxes, group discussions and Minute to Win It games. Teachers received a BreakoutEDU kit and computer science related books to take back to their classrooms. Students received a Winthrop backpack with books and activities related to computer science, and their school libraries will be receiving books as well.

The teachers will be returning to Winthrop in the fall for a follow-up activity and will continue to share resources with each other throughout the year. As part of the grant, they are also required to complete an activity related to what they learned this summer back at their schools. The College of Education plans to apply for the grant again this year. We believe that this is an excellent opportunity to help teachers plan for integrating the new South Carolina K-8 Computer Science and Digital Literacy standards into their core curricula. 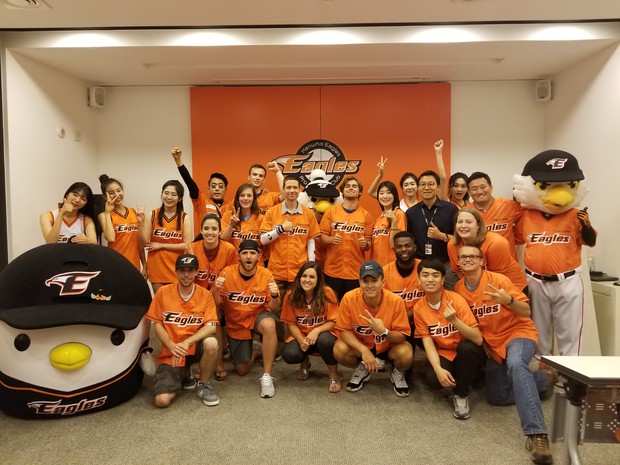 In May 2017, Dr. Jinwook Jason Chung led a group of 11 students on a short-term study abroad trip to South Korea. The purpose of the “Sports and Culture in South Korea" course was to experience the unique sports culture in South Korea by visiting various sporting events and venues, and experience diversity by engaging with Korean students.

Highlights of the trip included participating in a show, “All about LPGA” on the JTBC Golf Channel, which was broadcasted on May 23, and attending games such as the U-20 FIFA World Cup Soccer match (South Korea vs. Guinea); the SK Wyverns baseball game and the Hanwha Eagles (Korean Professional Baseball League) game, where the group received VIP treatment (e.g., free uniforms, one of the better seats in the cheering section, photos on the field with welcoming message on a jumbotron etc.). Students also had the opportunity to visit the Olympic National Training Center, Korea Institute of Sports Science, eSports Stadium and the Demilitarized Zone in between South and North Korea. In addition, students were able to engage with students from Seoul National University and Korea Aerospace University. They became friends instantly and started to communicate via Facebook and a mobile app called Kakao Talk. Students obtained an understanding of international sports and learned the potential for globalization in sport management.

Hunter Street Elementary School in York 1 School District, in partnership with Winthrop University and the Rex Institute Partnership Network, received the 2017 Richard W. Clark Award for 2017. This honor is awarded by the National Network for Educational Renewal in recognition of collaboration that advance the complex work of developing, sustaining, and renewing partner schools.

The award is attributed to the outstanding work of Dr. Linda Pickett who served Faculty in Residence (WFIR) at that school for the past several years and the school administration, teachers, and staff. The current assistant principal and school liaison, Dr. Audrey Allan, is a central part of the school’s success with the support of principal, Ms. Jane Wallace. As an inaugural Professional Development School in 2010, Hunter Street Elementary flourished as a model site for action research with teachers and faculty working together to improve student learning. The model has sustained now for seven years with teachers implementing new innovations and sharing their work with other schools through “Showcase Days” hosted by the Rex Institute.

The award will be formally announced and the school presented with a banner at the National Network for Educational Renewal Annual Conference in St. Louis on October 12. Please join all of us in congratulating the Hunter Street Elementary School partnership on a job well done!

Follow Ronda Collins
Contact Ronda Collins
Embed code is for website/blog and not email. To embed your newsletter in a Mass Notification System, click HERE to see how or reach out to support@smore.com
close