How can I write an inequality?

This sentence tells you that Ms. Hagan's hat is for ages 3 and up. So the sign will have a line underneath the 3 because you can wear it if you are 3 or older.

These are the inequality signs!

Writing an inequality from a graph

You can also write an inequality from a graph

How can I solve an inequality?

Solving inequalities is basically solving an equation. You have to add, subtract, multiply, or divide, but the difference is that you have a sign instead of a equal sign. Your main goal is to isolate the variable. Just like solving equations you have to add, subtract, multiply, or divide on both sides. If the variable has a negative sign after solving, you're not done yet. when theres a negative variable and you are dealing with inequalities, you have to flip the sign the other direction, but that's ONLY when you are MULTIPLYING OR DIVIDING! Be careful not to flip the sign if you are adding or subtracting. 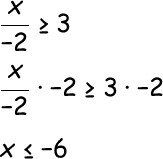 How can I graph an inequality?

When graphing inequalities, ask yourself these questions:

Is the number greater/less than or equal to the variable?

is the circle going to be an open or closed circle?

Did I shade or draw an arrow/line the right way?

Does my answer make sense?

The inequality's sign will tell which way to shade/to make a line, it will also tell you if it is an open circle or closed circle. You also have to label the number on the number line with a circle above the number, color the circle in if the sign has a line underneath which means it could be equal too. Finally, draw or shade to the left (if it is less than) or to the right (if greater than) 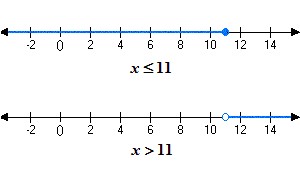