Our School is using Smore newsletters to spread the word online.

Welcome to the E-Newsletter for the Islip School District

Welcome to the E-Newsletter for the Islip School District

Wing Elementary School students celebrated World Kindness Day by studying what it means to be a kind and thoughtful individual. School social worker Allison Siegal Rutsky explained that the day’s activities “support social-emotional learning and teach students to do acts of kindness” on a regular basis.

The school’s kindergarten and first grade students brainstormed with their teachers about what “kindness” means to them. Teacher Justin Lollo read Rana DiOrio’s book “What Does It Mean to Be Kind?” and asked his students to think about how the author highlights different acts of kindness throughout the story. They also shared one way in which they have recently shown kindness to others. Likewise, teacher Katie Fuller read Todd Parr’s “The Kindness Book” and charted the students’ reflections on kindness using a circle map. The activity culminated with each student drawing a photo of themselves doing an act of kindness or writing a sentence about being kind on a decorated feather. The feathers were collected and placed into the shape of a Thanksgiving turkey. 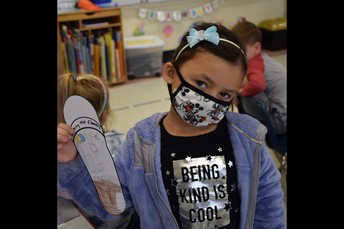 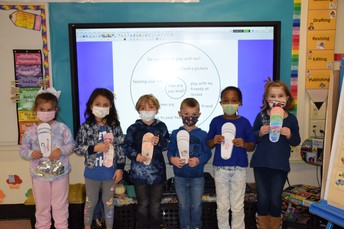 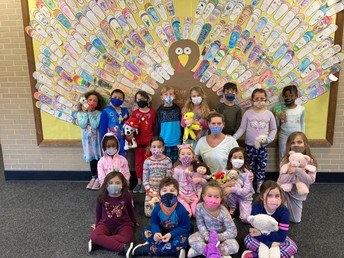 Getting to Know Someone Is a Gift

Commack Road Elementary School students are learning that, like a present, the way to truly get to know someone is to learn what is on the inside.

School counselor Sara Comisky showed a wrapped present to Jennifer Beck’s second grade class and asked the students to describe it. They first took note of the glittery wrapping paper and the size of the box, all of the outside features. The students guessed what they thought was in the box, and several students noted that the present had to be opened to learn what is inside.

After establishing that the only way to know what was inside the gift was to open it, Ms. Comisky discussed how presents and people are similar, which further led to a discussion that to truly know someone requires becoming familiar with what is inside.

“We don’t always know what special talents, strengths (gifts) someone has if we focus on the outside,” Ms. Comisky told the students.

Ms. Comisky described herself to the class as having brown hair and brown eyes, but told the class that they probably didn’t know that she was also a good baker and knew sign language.

To complete the social-emotional learning lesson, students were given a handout called “A Gift Others Might Not Know I Have” and were instructed to write their “special gifts” or strengths in the handout’s gift box. Upon sharing their work, peers learned different strengths about their classmates they hadn’t known prior to the activity. Some of the gifts included being a good dancer, knowing a foreign language, being from another country and being an excellent singer. 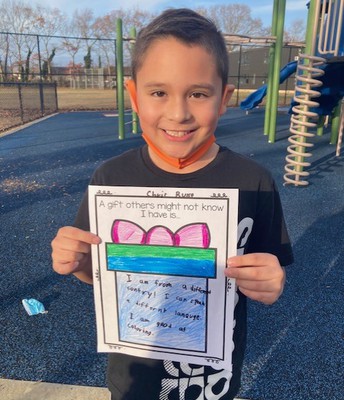 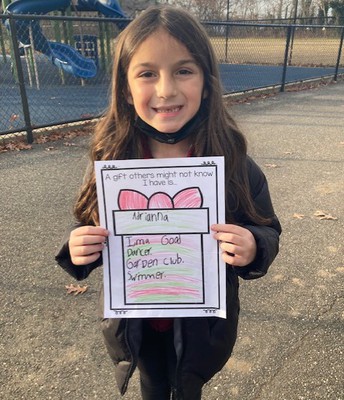 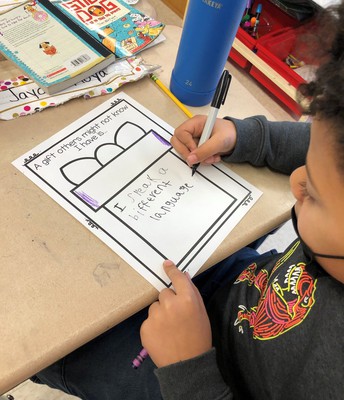 This project began when fourth and fifth grade students in Audrey Cella’s and Chelsea Haupert’s classes at Sherwood Elementary drafted their own “monster” designs, using paper and crayons. The fashion students then collected the 21 designs, and after much cutting and stitching, created plush, stuffed creatures based on the drawings. The plush monster creations were then presented to the Sherwood students upon completion in mid-November. It was a joyful, cross-curricular celebration that joined students whose paths would not ordinarily overlap in a traditional school day. 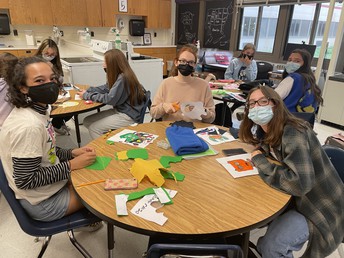 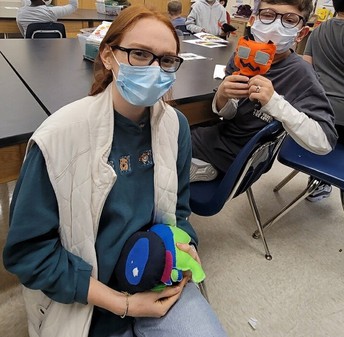 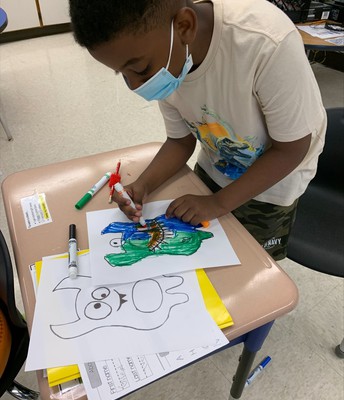 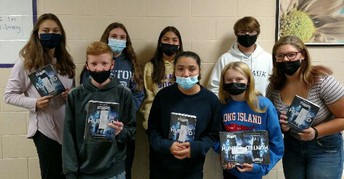 The writings of eight Islip Middle School students, who are now ninth graders at the high school, were published in the "Young Writers Anthology." The students wrote original mini-sagas of suspense while in Steven Taff’s eighth grade English class last spring. Inspired by the “Hunted” theme presented by the SOS Sagas writing contest, their tales were designed to make the readers’ hearts race and the hairs on the backs of their neck stand up. Juliana Conlon, Isabella Field, Aliannah Madriz, Nicole Matute, Riley O’Malley, Jacob Petelin, Jake Urban and Lauren Wade wrote such tension-filled stories, they were selected to be published in the "Young Writers Anthology." The students’ “Hunted” collection of stories can be checked out in the Islip Middle School Library. The SOS Sagas writing contest encourages middle school and high school students to write tales of suspense in just 100 words, using one of eight story starters. The purpose of the contest is to inspire students to write, as well as to nurture creativity and showcase talent.

Under the direction of teachers Renée DeCrescenzo Clock and Danielle McMullan, the Virtual Enterprise classes have realized successful outcomes in this year’s competitions.

The Virtual Enterprises International program allows students to experience all facets of being an employee in a firm by running a simulated business’s human resources, accounting, product development, production, distribution, marketing and sales. They engage in trade shows and competitions with other virtual enterprise firms around the nation and world.

The high school’s Virtual Enterprise firms, The Protein Panda and Home Voyage, competed in their first regional trade show against other Virtual Enterprise programs on Long Island. They used their sales pitches to sell products to students in participating districts and experienced buying from competing firms.

The Protein Panda sells meal plans and protein supplements to consumers, while Home Voyage sells curated subscription boxes of food, games, souvenirs and music playlists of different countries and delivers to the customers’ doors. The students experienced real-world buying and selling within the Virtual Enterprise hub and gained a lot of knowledge using their communication skills and business acumen in the Point of Sales systems.

During the Elevator Pitch competition in October, Home Voyage’s Carrin Argenziano ranked in the top 10% nationally and Protein Panda’s Jack LePore ranked above average nationally. During the competition, the Islip teams competed with 3,656 firms.

During the D4D (Design for Delight) Competition in November, Home Voyage's Sophia Regina ranked in the top 20 in the nation out of 770 firms. Additionally, Protein Panda's Ava Kurka and Jacqueline Bryant ranked above average.

Both firms will participate in the Long Island Virtual Enterprises International business plan competition and trade show in January. 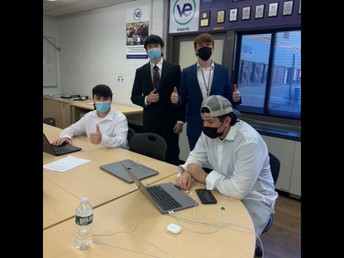 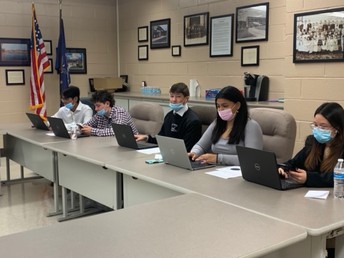 A talented cast and crew drew a full house during performances of “Little Shop of Horrors,” held at Islip High School this fall. Staged and performed by students of the high school’s theater class with the guidance of Dr. Richard Harris, the two-act black comedy based on the off-Broadway musical moved the audience with its story about a geeky florist who finds out his Venus flytrap has an insatiable appetite for human blood. In addition to the quirky and fun-filled plot line, student-performers entertained the audiences with popular musical numbers, including “Grow for Me,” “Suddenly Seymour” and “Suppertime.”

Director of Fine and Performing Arts Brian Kroll congratulated the cast and crew on such a wonderful production. “The singing, dancing and acting truly displayed the hard work that was put forth in order to produce such a wonderful show,” Mr. Kroll said. 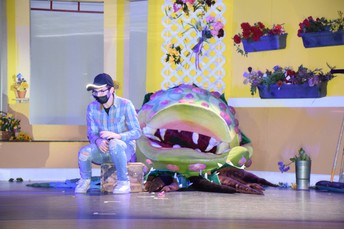 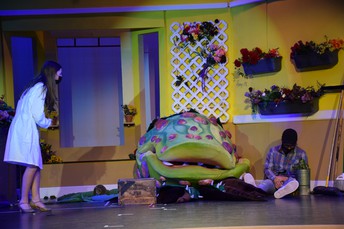 Student-Athletes Volunteer at The League of Yes Baseball Program

Dylan Lange, Kaeli McAnally, Jillian Oggeri, Taryn Quinn, Hunter Rindos, Richard Rindos and Noah Whitehouse made the trip to The Yes Baseball Field in Brookhaven where they assisted Samantha in coaching participants in batting, fielding and running. More importantly, the Islip athletes served as buddies to the baseball players. It was a wonderful experience for the baseball players, their families and the Islip athletes. 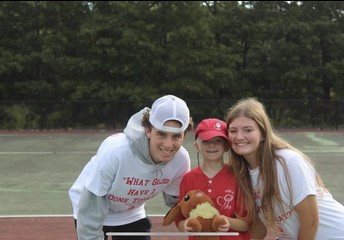 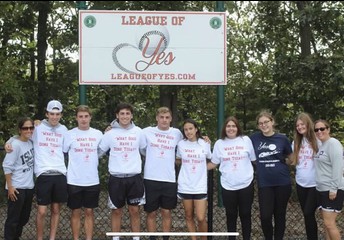 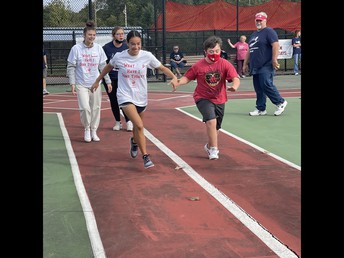 The district congratulates the following student-athletes: 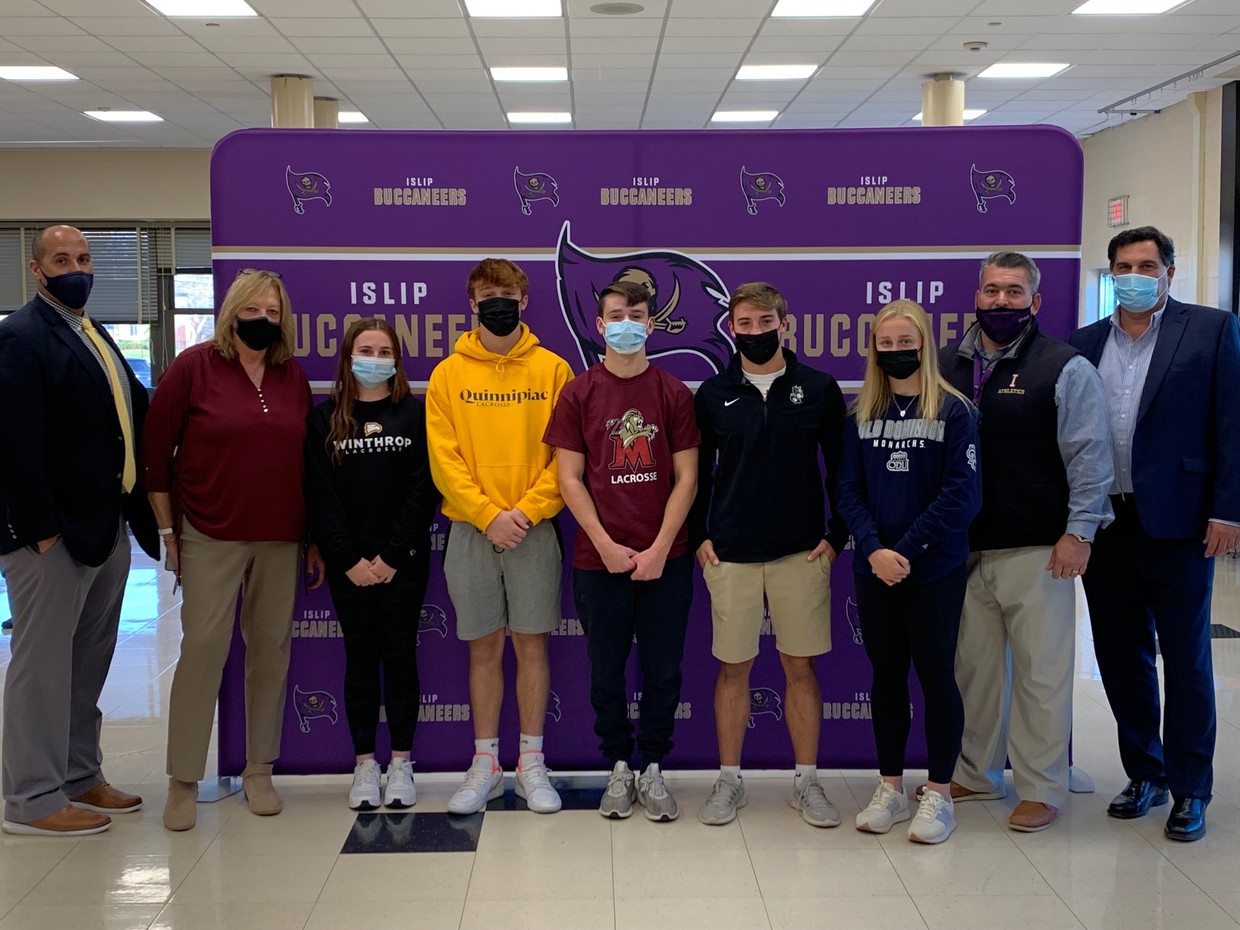 Senior student-athlete and varsity point guard Kaeli McAnally reached a milestone in her career by scoring her 1,000th point against Patchogue-Medford during The Anil John Memorial Basketball Tournament, held at Islip High School on Dec. 3. The Anil John Memorial Basketball Tournament honors three-year varsity basketball player and Islip High School Class of 2015 graduate Anil John, who lost his life in a tragic accident in 2015. After John’s death, his uniform number 22 was retired from the basketball program, and the team collaborated with the Islip Booster Club to name the annual tournament in his memory. 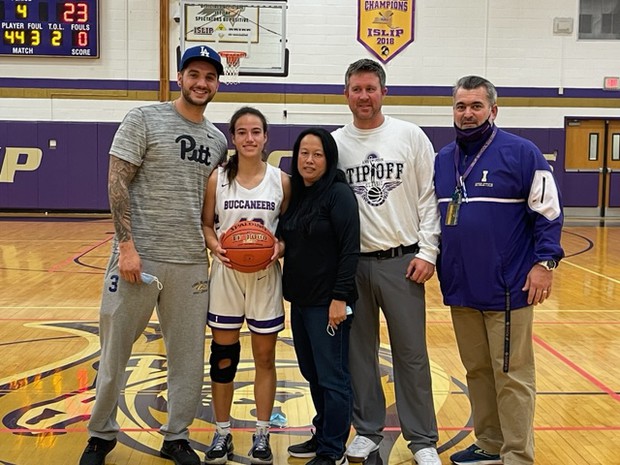 Seniors Jacqueline Bryant and Hunter Rindos were selected as recipients of the Suffolk Zone Award. Sponsored by the New York State Association for Health, Physical Education, Recreation and Dance, the award recognizes one male and one female Suffolk County high school senior from each school district who exemplifies outstanding scholastic ability, physical education performance and leadership qualities. In addition to being excellent students, Jacqueline is a member of the girls varsity volleyball team and Hunter plays varsity lacrosse. Both students have plans to continue their sports on the collegiate level next fall. 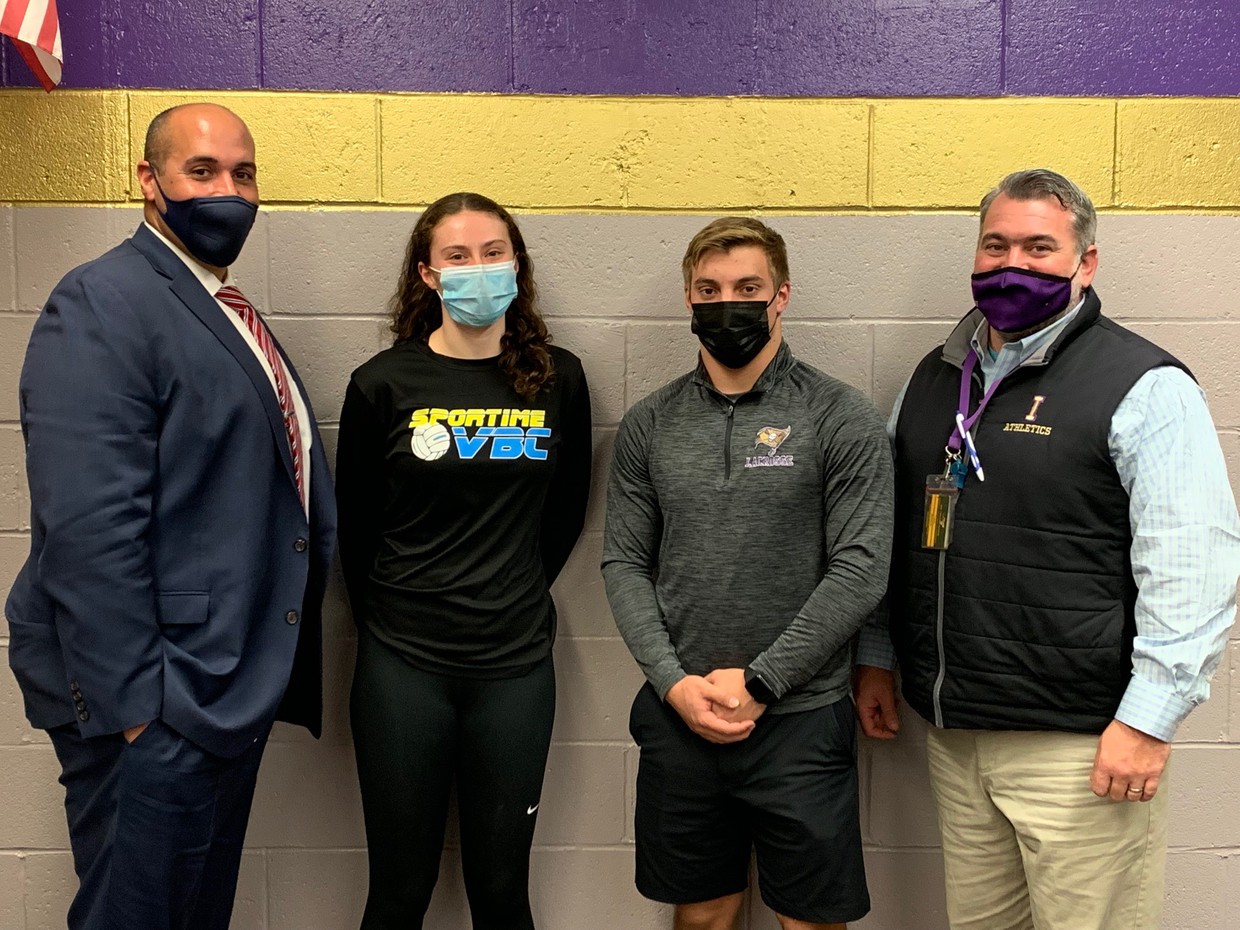 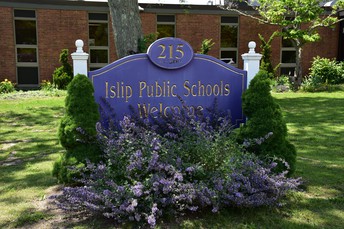 Connect with Our School News

Our School is using Smore newsletters to spread the word online.