anita is using Smore newsletters to spread the word online.

Get email updates from anita:

The warm, moist air over the ocean rises upward from near the surface. Because this air moves up and away from the surface, there is less air left near the surface. Another way to say the same thing is that the warm air rises, causing an area of lower air pressure below.

The states affected by Hurricane Katrina were Florida, Louisiana, Mississippi and Alabama.

At the end it was a 5 on the scale

The insurance industry as of late August 2006, had reached approximately $60 billion in insured losses (including flood damage) from Katrina. The storm could cost the Gulf Coast states as much as an estimated $125 billion when, and if, a final toll is ever tallied, according to NOAA, parent organization to the National Weather Service. 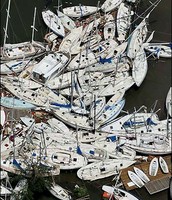 anita is using Smore newsletters to spread the word online.