Alaze is using Smore newsletters to spread the word online.

Get email updates from Alaze:

Before you get to the Appalachian Mountains to the west of the southern colonies, there is an area called the Piedmont. The Piedmont has rolling hills with large fertile soil that is ideal for farming. The weather is much warmer and humid throughout much of the year; allowing for the harvesting of certain cash crops. Along the Atlantic Coastal plain, there are good harbors and wide rivers that reach further inland.

Southern Colonies Social, Political, Religious Life Since the economy revolved around large plantations, very few cities or towns developed. Counties made the laws and rules for the colony. The South kept close relations with England, therefore, the Church of England was at the heart of Southern life. The college of William and Mary was created to teach young men to become Anglican ministers. There was a big gap in social classes between wealthy plantation owners and indentured servants or slaves. They depended on the Middle colonies for grains and other agricultural products are not plentiful in the South.Natural, Human, Capital Resources

The Southern Colonies had Natural resources of fertile farmlands, rivers and harbors.

They had Human resources of farmers, enslaved African Americans and indentured servants.

Those two resources worked together to produce their Capital resources of tools and buildings. 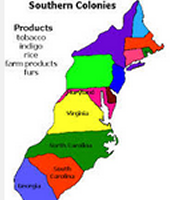 Alaze is using Smore newsletters to spread the word online.