Get email updates from Angel:

How Blindness Effects the Brain

How Blindness Effects the Brain

Blindness Affects the Structure of the Brain

Blindness has a significant impact on the structure of the brain. The brain has the ability to reorganize its structure to accommodate changes, which is also known as neuroplasticity. A prime example of the brain's potential for neuroplasticity can be found in individuals with blindness. One of the areas that is most severely affected in the brains of individuals with blindness is the visual cortex, more specifically, visual cortical neurons. When the eyes and brain are deprived of light, these neurons lose their dendritic spines (Breedlove & Watson, 2013). In addition, a reduction in synapses also occurs as a consequence of blindness (Breedlove & Watson, 2013).

Video: What is Cortical Visual Impairment 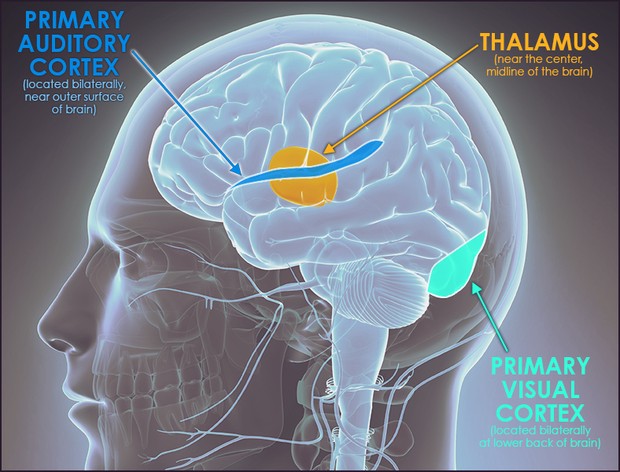 Other Impacts on Brain Structure

Blindness not only leads to the rearrangement of neurons in the brain's visual systems, but in other systems as well. In the article by Lepore et al. (2010) the author's write that blindness impacts auditory systems. For example, they found a region of the auditory cortex to be twice as big in the brain's of blind individuals than of sighted individuals (Lepore et al., 2010). Furthermore, some research shows that the systems usually used for visual processing may be used for auditory and tactile purposes in blind individuals (Lepore et al., 2010).

Follow this link to the article by Lepore et al., which contains useful information of how blindness affects the brain: http://www.ncbi.nlm.nih.gov/pubmed/19643183

A Comparison: Brain development of Sighted vs. Blind Individuals

One of the most significant ways in which the brain of a blind individual develops differently than sighted individuals in how different regions of the brain are used. For example, in sighted children the visual cortex is used excessively for processing visual images. However, in some blind children this same region has developed to process language (Lepore et al., 2010). In other words, the brains of some blind children demonstrate impressive neuroplasticity by modifying the function of the visual cortex to include the processing of non-visual tasks.

Video: Looking Inside the Adaptive Brain of the Blind

The following video discusses the brain's ability to reorganize itself in the case of both ocular blindness and blindness caused by damage to the visual cortex.

The National Institutes of Health websites features an interesting article on neuroplasticity as it relates to blindness: https://obssr.od.nih.gov/neuroplasticity-in-blindness-what-it-tells-us-about-the-mechanisms-of-blindness/ 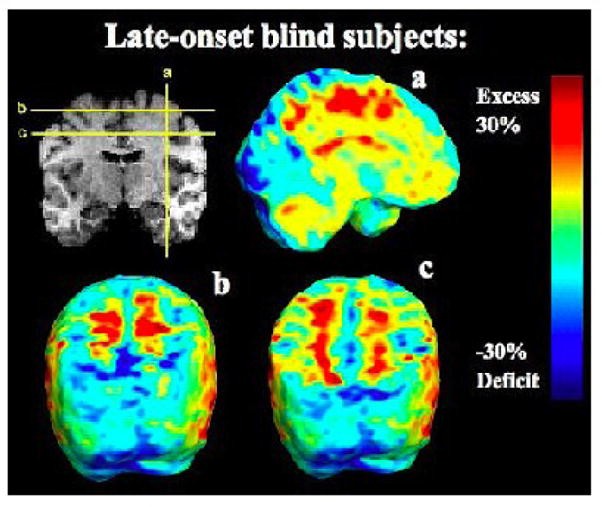 Neuroplasticity in blindness: what it tells us about the mechanisms of blindness. (2016). NIH: Office of Behavioral and Social Science Research. Retrieved from https://obssr.od.nih.gov/neuroplasticity-in-blindness-what-it-tells-us-about-the-mechanisms-of-blindness/

Merabet, L.B. (2015). Looking inside the adaptive brain of the blind [Video File]. Retrieved from https://videocast.nih.gov/Summary.asp?File=19243&bhcp=1

Perkins School of the Blind. (2015, October 2) Part 2: Cortical/Cerebral Visual Impairment - What is it? with Darick Wright and Barry Kran. Retrieved from https://youtu.be/t4exCMip0_Y