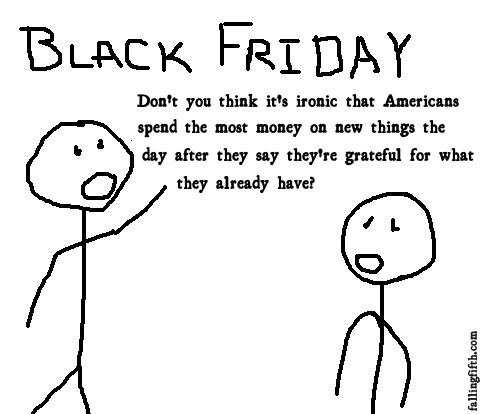 Slowly and surely Black Friday became the most talked about thing during the holiday season. It started off in Philadelphia as "Big Friday" but the name just wouldn't stick. It became the biggest shopping day of the year in 2005 and keeps increasing in number of shoppers and money spent every year. Another thing that is quickly changing is the time that they start. It started off at six in the morning and crept to five then four, then in 2011 some stores opened at midnight. This year it took a wild turn when Walmart opened at eight pm Thursday night.

If this chaotic event was going on during their time period they would be awful upset. They believed in simplicity and enjoying nature and being kind to others. Black Friday doesn't show any of these beliefs. It could possibly be the complete opposite. An event about complicity with coupons, ads, block busters, and limited supply has created a violent event. Violence is never the answer.