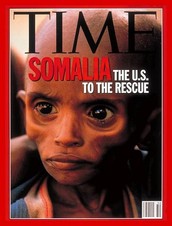 Who was involved and quick background

The United States army, people of Somalia, and warlords fighting for power were mainly involved. In the country Somalia, the city Mogadishu was in the middle of a civil war and was experiencing a famine. President Bush sent American troops to Somalia to save the people from starvation and to settle the dispute of power that was causing the war. When Clinton took office he removed U.S. troops and sent in more U.N. troops. 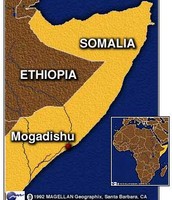 Shows where the city Mogadishu is in the country Somalia, and where Somalia is in Africa.

A U.S. soldier is helping a Solmalian family and checking vitals of an infant.

American helicopter was shot down by Somalian forces.

United Nations troops were sent to Mogadishu, Solmalia in July 1992. American troops took over the leadership position in December 1992. 1993 the U.N. officially took over the operation, as Clinton wanted. Late spring of 1994 all the U.N. troops were withdrawn from Solmalia.

Footage from Black Hawk Down incident

Real footage of the Black Hawk Down Raid (Battle of Mogadishu, Somalia 1993)

Truth about Black Hawk Down

The beginning, middle and end

500,000 Somalians were dead and thousands were in danger of dying, and Bush sent troops to restore hope in the country. The operation was U.S.-led and U.N.-sanctioned. Three Ready Reserve Force vessels came to support the U.N.'s humanitarian and peacekeeping operations in Somalia in 1993. By March 1993, mass starvation had been overcome, and security was improved. By early 1993, sector 'coordination centers' had been established in eight areas throughout Somalia.