Ghettos were a place during the Holocaust where all Jews were held before being transferred to concentration/extermination camps. These places were usually small sections of towns and cities gated of and guarded by Nazi soldiers or run by the Judenrate. Often these towns were in bad condition and were never maintained. Each family was allowed one room. This was a large part in Hitlers genocide and was a big reason why the event was so organized. it showed organization in the system and that many people were involved. It also was a sign of preparation showing that the targets were singled out and grouped together in order to make pogrom easier and quicker. The final solution was not a spur of the moment thing and had been planned and clearly communicated to those involved. This was also shown in the ghettos when large evacuations took place and after everyone was gone they would do sweeps to clear out any people left hiding. 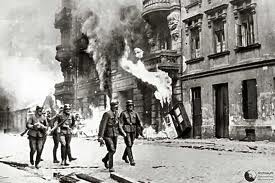 This is a picture of a sweep being done after an evacuation to clear out anyone left over. It shows the brutality of the police running the ghettos and shows that they took there jobs seriously. They were not thinking off the jews as people, they were thought of as rats and were to be exterminated. If you were put into a ghetto is was thought to be a big chance you would die in concentration camp. the Nazis were so serious about the pure race they burned all ghettos to make sure no one was left hiding inside. Both these pictures show the fear that had grown inside the ghettos and also the conditions that the Jews faced. 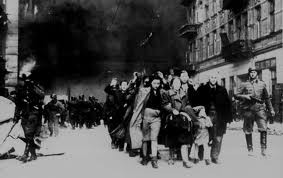 Nazis establish Jewish ghetto in Lodz, Poland
I chose this video because it does a good job in portraying the conditions of the ghettos. It talks about how many people were in them and how mistreated some were. It also talks about how many people were killed during large cleanses and random killings. It is a very good way to give a visual of the ghettos and seeing the images of the jews sets how terrible these places were into the viewers mind.