My time in British Literature

My time in British Literature

I think the media is a source of information for the public. Whether it’s by TV, Internet, radio, etc.; everybody gets information. Nowadays information spreads fast and wide. I think to be media literate is to read a text or message whether it is on the internet or on some other way and understand it completely. Also understanding how to create your own message in your own right and letting other people comprehend it. Media is meant to get the daily news about what’s happening around you and in the world. Media sometimes doesn’t give you the full picture of things so it’s better to just look it up and understand it better. That’s why there’s so many different ways to get your information. You can read an article on the internet, read it on a newspaper, or even watch it happen on TV as the news channel tells you about it. To be media literate is to comprehend and decipher a media piece. It’s kind of like reading and understanding a poem and what it means. Like the metaphors and similes and how they fit into the poem. While sometimes they only give you pieces of the full picture, at least they inform you about what’s happening so you know what you’re looking for. The only bad part about that is that sometimes they actually don’t know what’s going on so they play it by ear and what they see. That only usually happens to celebrities though and politics.

this shows how many different ways there are to get your information.

this explains what media and media literate means. 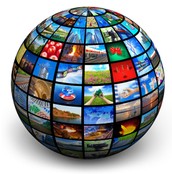 this shows how anyone can see anything nowadays and get information all around the world.

In the speech “BTN (Nov. 5)”, V argues that something is very wrong in this country. V explains his argument by pointing out the problem, questioning who’s at fault, and calling the people to action. Using examples from the past and the present, he explains and reminds people in order to get people to think for themselves, “If you’re looking for the guilty, you need only look into a mirror(3).” V’s oppressed audience is the people of England because he opens and closes the speech by addressing the people of England and advises people to act because there is something very wrong with this country, V’s tone changes throughout the speech from calm at the beginning to serious, accusing, and then finally inspiring. 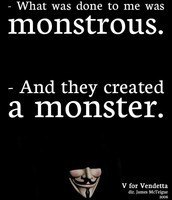 Macbeth 3 :Macbeth's is a flawed hero because he can tricked and he was extremely ambitious. he was prideful and loyal but towards the end he was paranoid, scared, and haunted. His flaw was he was too ambitious. The witches and his wife led and tricked him and influenced him to do things he didn't want to do. In hunger Games Katness wasn't trying to save people . She was content with her life and happy with the way it was going. The dystopian society was a oppressive society that was trying to control everyone's life. The monsters they were fighting against was peoples hunger for power and ambition to keep people in line. They fought back by taking the fight district by district until they got to the capital. Yes they were successful by killing their leader snow and taking control of the capital. On a different note by taking control of the capital, the ironic part is that Katness says by destroying this government. She hopes that she didn't make a worse by destroying the old government.
Proles 4: When O'Brien says to Winston that he's the last man with humanity, i believe he's saying that everybody else is broken and Winston is one of the last ones to break. He believes that the proles are the last hope for a rebellion and he decided to take it into his own hands in his own way. I think he was too hasty and didn't really think about it too much or plan anything out. He's an archetype for the spirt of freedom for the proles and believes that one day they can stand up to the party and make everyone else free.
Crazy People 5:I feel as if the Milgram test showed how brutal humans can be without them even noticing it. I also believe that people will do whatever other people say as long as they feel they won’t get in trouble. As an example in the report one person kept going just because they said they would be responsible for it. Who knew if he was telling the truth or not and they believed it and just went for it. In the Stanford prison experiment it showed that if given power most humans will abuse it. In the experiment at first it felt as if they were playing and then after a while it was embarrassing and more like torture. The atmosphere was intense pretty much sucking everybody in it. Then Abu Ghraib was like Stanford except more real and more terrifying. Pretty much they would torture people and make people go crazy. I believe that O’Brian was not a victim because you should be able to make your own decisions and think that torturing people isn’t a good thing. It’s not normal anywhere to torture humans into believing things that they don’t want to.

In the commercial "Axe Peace" Axe portrays violent situations and turns them into something good and shows how peace can equal happiness. Axe claims that peace is better than war, in order to try to stop all the wars that are happening around the world. Axe's purpose in this commercial is to show people that we all don't have to cause war instead put our differences and be happy. Axe is writing to everybody essentially including people of different countries and people of those countries, also their tone in the commercial was intense in the beginning and got at the end to be sincere.

My views have changed dramatically in the sense that I have learned so much and become smarter in doing so. My view has changed in the sense that I can understand and dissect articles, poems, and TV shows. I learned how to see the world in a different view and see how history teaches lessons, also how mythology was based on lessons that people should learn from. This class was different in the sense that I paid more attention in this class than I did in any of my other classes because this class was of my most interesting classes I’ve ever taken. To make this class better, we could of done more projects and had more presentations.

Balance between Phone and humanity

Phone’s have made us separated and social medias have not helped us make new friends. We don’t meet in person and we don’t make friends in the real world but in the digital world and it makes us nerves to hangout outside. We always on the phone and never really talking and hanging out with the ones we love. Nowadays when friends hangout their still on their phones and can’t get off to talk to them and there’s no sense in doing so when people are addicted to their phones. “attention span of an average adult is 1 second behind a gold fish.” We shouldn’t have to be on it all and everyday instead we have to find a balance. Maybe hangout with friends with your phone on silent or totally silent. Maybe turn it off when your hanging out with your grandma or cousins. Maybe go for a walk without your phone, tablets and smell the fresh air. We can use the digital world to connect the world together but don’t always be on your phone or computer instead just be in a balance between our humanity and our digital life. In certain situations, you don’t need phones to connect with other friends when your hanging out with friends. Does that make sense to you? Life needs to be changed and we don’t always need to be on our phones. Some people don’t see this as an addiction but a conclusion to their loneliness and accept this as the life their willing to live. When you subjugate yourself to this type of behavior you have to understand you have a problem and that you need to control it before it controls you. To control it you have to make changes even in the smallest ways like going to watch a movie without your phone or going for a jog without your music.