Barry is using Smore newsletters to spread the word online.

By Barry B. and Shelton J.

By Barry B. and Shelton J.

Both congress and the president have control over our bureaucracy. It works by Iron Triangles (The relationship between congress, executive agencies, and interest groups. They use their leverage and money to get what they want.). The power of the Bureaucracy is determined by the discretionary authority ( the ability to choose course of action and make policies not spelled out in laws.). The appointment of officials used to be fully up to the POTUS, but political parties took over and nothing was getting done. The appointment of officials is now done by the Merit system (what a person knows and has done.). The Bureaucracy is kept from getting out of hand and is slowed down by Red Tape which is a set of rules, regulations, and paperwork. The government gives public programs and services from the federal government to the states and that is called devolution. Bush used privitization to frire low- level federal employees and give jobs to private buisnesses. 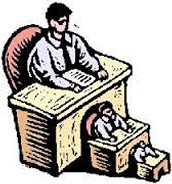 Why is the bureaucracy sometimes considered the "fourth branch of government"? It is how everything gets done in the government. Different policies are changed according to what the interests groups want. The bureaucracy's job is to interpret and enforce laws enacted by congress.

Does a largely permanent professional bureaucracy serve democracy? The bureaucracy is supposed to serve the people, not democracy. It does not serve a democracy because of the corruption in elections and the bribing as seen in iron triangles.

One characteristic of the merit system is that it hires government employees based on there knowledge and prior achievemnts, not their beliefs, affiliations, nor aquaintences.

The structure of the Bureaucracy is made up of interest groups, executive agencies, and congress. They are difficult to fire because of their merits and are mostly independent from political affiliation. The complexity of public problems is because most agencies overlap in areas. Each agency is a specialist in one area.

Congress uses appropriations, pass legislation and can reject appointments. The courts use judicial review and injunctions.

issue network- A network of people in Washington DC based interest groups, on congressional staffs, in universities and think tanks, and in the mass media, who regularly discuss and advocate public policies.

trust funds- funds for gov. programs that are spent outside of budget.

Pendleton Act- Gov. jobs should be awarded based on merit.

Barry is using Smore newsletters to spread the word online.