Tegan is using Smore newsletters to spread the word online.

Get email updates from Tegan:

Maya is a hard working student, all A's, and honors classes. She loves to help others, by turtoring them. But not Camden Parker, the most popular guy in school. But when she is in sudden need of $10,000, Camden has a sudden idea. Doing peoples homework for money! Friendships will be tested, relationships will be developed, and one wrong move can ruin the whole thing!

Homework from students is being done by Maya, for money. When she starts getting tons of papers she doesn't have enough time for sleep.

Camden and Maya meet in Camden's car to discuss products and money. Or is it more than just business? 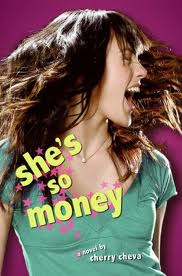 ME: What were you like in high school? Were you a nerd? You said in one interview you used to wear men’s XL T-shirts. I think that’s cool, but you can dispute me on that. (I had pimples, glasses, headgear, and braces, so I think I was in a much worse situation).

CHERRY: Oh, yeah, I was totally AP-classed out and whatever. I played the violin, I didn’t do any sports. Yeah, nerdy. I still wear men’s XL shirts! That is the joy of having no dress code at your work.

ME: What were your hobbies in high school, outside of getting straight A’s? (I’m assuming that you got straight A’s because you went to two fancy-pants universities and you are smarter than anyone I know). You can also tell me any of your hobbies now, since that is interesting also.

CHERRY: Oh, shut up. :) And also I did not get straight As. As for hobbies, I…didn’t have any? I’m trying to think…man, this is gonna sound sad, but outside of school-related stuff, I didn’t really do anything. I wouldn’t call playing the violin a hobby.

ME: What were your friends like in high school? Did you guys have a clique, or did you think cliques were dumb like I do?

CHERRY: I had various groups of friends that sometimes overlapped; I wouldn’t characterize any of them as being cliques because it’s not like it ever stopped us from also being friends with other people.

ME: Did you have any boyfriends in high school like Maya’s or Kate’s or were you too busy for romance? (I myself became less smart when I got a boyfriend. I think my high school boyfriend is the reason why I’m not a pediatrician, but that could be an excuse).

CHERRY: What! Never be too busy for romance, how depressing is that?! But no, Maya’s & Kate’s boys were not particularly similar to mine.

ME: What was your family like growing up? I know you’ve said in previous interviews that Maya’s family structure was similar to yours.

CHERRY: The surface structure was similar but that’s about it…My parents were indeed super-strict though. Like, crazy strict. Like, in early drafts my editor told me to make the parents in the book nicer because it wasn’t believable that they were that strict.

ME: You’ve created two characters that put a lot of pressure on themselves to succeed in high school. You’ve said in previous interviews that you were never as hardcore as Kate or Maya, but what inspired you to create them?

CHERRY: Well, I certainly related to that whole thing. I certainly lived it, if not in such an insane way that I went to the desperate measures they did. So it was kind of like writing my high school experience, but just an amped-up version of it.

ME: When you were writing your first book, “She’s So Money”, what was the process like? Had you attempted to write a book beforehand? How was it different from writing for TV?

CHERRY: Oh, lord, SO different. In TV you spend most of your time in a room with other people, pitching stuff out loud and laughing all day, and for a book it’s just you by yourself staring at your computer screen. I’d co-written a Family Guy book with Alex Borsteinbefore (or was writing it at the same time…I can’t really remember the time frame), but writing a novel was really different. I kind of tackled it vaguely like a TV script though…like I had a loose outline of what would happen in each chapter, so there was a roadmap to follow as I was writing it.

“Hilarious and genuinely climactic. Best of all, Maya is a refreshingly smart hero.” —Chicago Tribune

Everyone's reading it! So why not you? Buy today, everyones doing it! Over 500 copies have been sold already!

Tegan is using Smore newsletters to spread the word online.