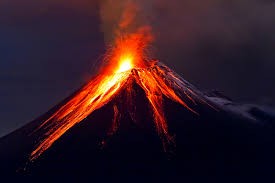 A volcano is caused by tectonic plate movement, earthquakes, and magma rising to the surface of the earth. There can be a couple types of eruptions:an explosion type eruption or a volcano with lava. A volcano would change the habitats in the area by completely destroying them. Animals would either migrate, adapt, or die. The biodiversity would have a large impact. There would be a large decrease in the biodiversity & sustainability in the ecosystem. If there were still animals left they would most likely die because their prey's population would either be extinct or endangered. The animals wouldn't be getting enough food which would cause them to die. This would then lead to a low biodiversity/sustainability; there'd also be a change in the food web of that ecosystem/environment. After a volcano there would be massive effects to the environment, sustainability, biodiversity, and food webs.

Positive Impacts After A Volcano

Positive Impacts on the Atmosphere

The volcanic ash and molten lava caused by the volcanic eruptions, can be used to create dams.

Heat is released into the ocean, which can be used to heat homes, produce electricity, and power items.

Positive Impacts on the Surface

After the volcano erupted, the soil became fertile. Which can cause more plants to grow.

Negative Impacts After A Volcano

Negative Impacts on the Atmosphere

Once ash is released into the air, many animals' lungs can be damaged.

Many animals would die from the volcanic eruption.

Negative Impacts on the Surface

Because of the lava from the eruption vegetation would be destroyed.