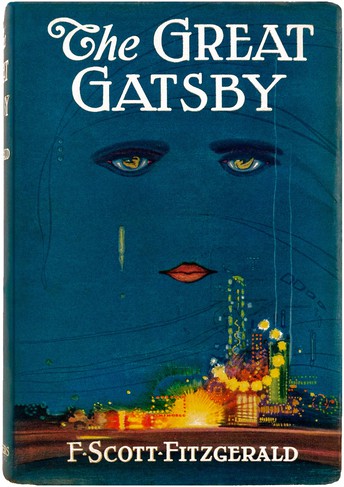 Society In The Great Gatsby

In The Great Gatsby, the relationships between men and women are portrayed as opponents, but not equal ones. Even though Daisy, Myrtle, and Jordan had the freedom to express themselves verbally, you can tell that the balance of power in relationships still favors men. The women have the right to say what they want, while the men have the right to do and say what they want. There are many examples in the book that show that women’s role in society was second to men’s.

The men were expected to be strong, go to college, and have successful careers while the women were expected to marry and have children and be beautiful to be successful or valued. (Pg:13) Tom, Nick, and even Gatsby received education from top schools. Daisy improved her status by marrying Tom. Daisy even hoped her own daughter would be a “beautiful fool” because “that’s the best thing a girl can be in this world”. (Pg:17)

People believed it was ok for men to have affairs, but not women. Tom had more freedom to be open about having an affair. Jordan said she “thought everybody knew” about Tom seeing a woman in New York (Pg:15). Meanwhile, Daisy had to be more discreet and hide her relationship with Gatsby. Gatsby even fired all of his staff so no one could ruin Daisy’s reputation with gossip about her visiting him (Pg:114). Nick even spent the day with Tom and Myrtle, despite Daisy being his cousin. (Pg:24). Despite his own cheating, Tom got mad and offended when he discovered that Daisy was too. Gatsby even felt entitled to tell Tom about him and Daisy, instead of her deciding. Both men argued about who would take better care of Daisy as if she weren’t an adult.

It was acceptable for men to control and abuse women when they got out of line. It was also expected that women were dependent on men. When Tom slapped Myrtle and “broke her nose with his open hand” for getting smart with him, the women just scolded and the men left the scene and didn’t get involved. (Pg:37)

When Wilson suspected Myrtle of cheating, he threatened to move her out West “whether she wants to or not” (Pg:123) and then locked her upstairs because he felt he had the right and power to do so. (Pg:136). Myrtle yelled for Wilson to “Beat me!” before escaping outside and getting run over by Daisy. After Daisy killed Myrtle in the hit and run, Tom and Gatsby immediately jumped in to “protect” Daisy instead of her turning herself in and owning up to it like an adult.

Tom, Gatsby, and Mr. Wilson acted in ways that showed they believed they could control women and have the women as their weaker opponents, not equals. There is an obvious imbalance of power seen throughout the book. Society was unfair and misogynistic then and in many ways it still is today.

Everyone has read pieces of literature that were considered overall classics or were timeless, but what makes them that? Books like The Great Gatsby are always considered classics while writers like Shakespeare are always considered great or one of the greatest. When looking up “what makes books classics” you see definitions defining classic literature as an “expression of life truth and beauty.” While that would make a great book for one, it may not hit the same spark as another. Judging literature as being good or bad isn’t as easy as judging if a pair of headphones is bad.

Personally, books can be anything to anyone. One person may consider timeless literature as a book that doesn’t get old each time you open it, and another may consider timeless literature as a book with quality that doesn't change as times change. And here's the greatest thing about it, there's nothing wrong with that. I believe that there is no way to call a book objectively/factually great, a classic, or timeless. It’s all up for interpretation. 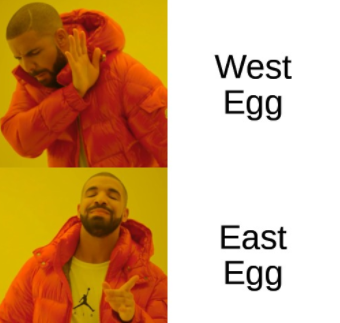 I got the idea for this picture by this quote...“I lived at West Egg, the-well, the less fashionable of the two.” (Pg:5) 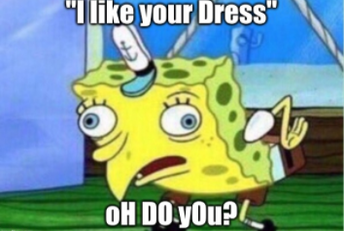 “I like your dress,” remarked Mrs. McKee. Mrs. Wilson rejected the compliment by raising her eyebrow in disdain. (Pg:31)

I got the idea for this meme because, in a way, Mrs. Wilson mocked/didn't want her compliment. I thought that this could fit with how sarcastic the meme was. 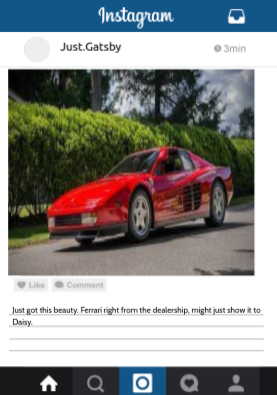 How I thought of this would be that since Gatsby was a newcomer to the neighborhood, he would want to show off how cool he was. So I had him brag about an expensive car. 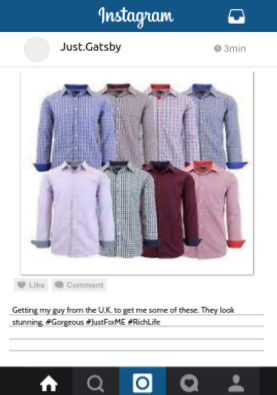 I got the idea for this post because it is mentioned in the book that Gatsby had a stylist/dresser overseas that brought him some of the top-quality clothing he would be looking for. This made me make a post about Gatsby talking about it.