Arjan is using Smore newsletters to spread the word online.

Get email updates from Arjan: 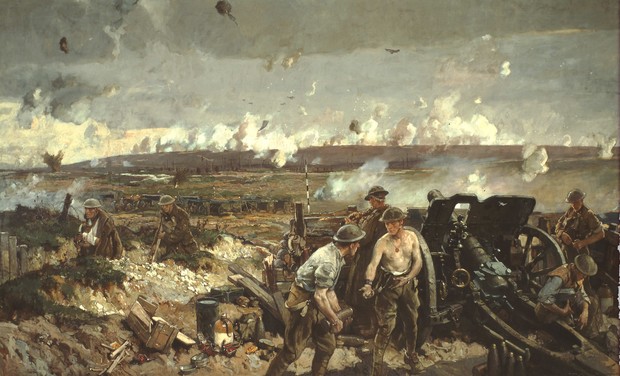 The Battle of Vimy Ridge, a painting by Richard Jack, Canadian War Museum.

quick overlook of what happened

The battle of Vimy Ridge took place during the first world war in 1917. In this battle we see the four divisions of the Canadian Crops working together for the first time and defeating the Germans and taking over Vimy Ridge. The battle began at 5:30 on April 9, 1917 (Easter Monday) to April 12,1917. Bloody Easter they called it, the day the battle started. Over 100,000 soldier's fought in this battle and many didn't go back home.

What is Vimy Ridge?

Vimy Ridge is a long cliff/hill, located in Northern France (about 175 km north of Paris). The Germans had captured Vimy Ridge in the begging of the war and made it into a strong defensive position and you would think how the Germans lost. The Germans had dug out a whole tunnel system and trenches, all equipped with well trained soldiers and weapons, so they were well prepared!

Ross Rifle Mark III - Majority of infantrymen were issued rifles. This rifle was used by the First Canadian Divisions. These rifles were not the best, they jammed while you were shooting, putting you into a tough position.

Bayonets - When soldiers were in close quarters (fighting 1 on 1), bayonets were used, which were more effective then rifles at times because the rifles jammed.

In the battle of Vimy Ridge, many grenades and canons were fired continuously to execute a great plan which we will later talk about.

Birth of the Plan!

Formal discussions for an attack started in November 1916. After the discussions started the Canadians started making there way towards Vimy Ridge. In March 1917, the British Army presented orders outlining the objective for Vimy Ridge to Commander Julian Byng (commander of the Canadian Crops). After this, the plan was to be followed and preparation for the battle took place.

What was this great plan?

The plan was formally called the "creeping barrage". In this attack, the Canadian's wanted to continue to fire even as the Canadian solders left their trenches. They wanted to hurl shells ahead of advancing soldiers, so that the Germans were forced to stay back, letting the Canadians get closer to them.

The Battle of Vimy Ridge

The planning and preparation for this battle was extensive. By 1916 the Canadians had moved to the front lines of Vimy Ridge, after hearing discussions for an attack. For this plan to be executed smoothly, the soldiers had to be trained rigorously. The four Canadian Crops were all strengthening their lines, each soldier had their positions and knew what to do and at what time. The Canadian's also managed to raid the German positions to gather information on their defense lines.

The Canadian soldiers built the first "underground city" of its kind. The tunnels were dug under the Germans trenches and explosives were set for the attack. The Germans had dug out tunnels as well, sometimes the Canadian's tunnel connected with the German tunnels, this led to underground warfare. There were lights, running water, train tracks and bunkers. A lot of effort was put into making the tunnels!

Walking Through the Tunnels!

Walk through one of the tunnels in Vimy Ridge

General Arthur led the Canadian forces to transform the battlefield into a more strategic layout. A week before, the Canadian's started to shell the Germans everyday, which was known as the "week of suffering" by the Germans. This would get the Germans really mad right before the Canadians were going to go attack. 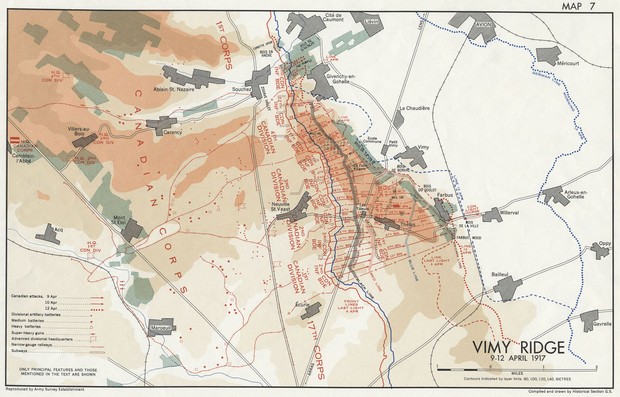 Here is a map of Vimy Ridge, Canadians coming from the left and Germans from the right. 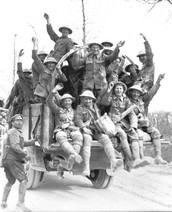 On April 9, 1917, 40,000 left their trenches and the attack had begun. The artillery (shells, bombs) fired just in front of the Canadian troops (was timed to a minute) as they made there way towards the Germans. It took two days of firing until the Germans retreated from the ridge, letting the Canadian's take the victory.

About 100,000 soldiers from the four Canadian Crops fought in the battle of Vimy Ridge. There were approximately 11,000 casualties (a person killed or injured in a war accident), about 3500 of them were fatal. By the end of the First World War Canada had about 650,000 servicemen out of the population of about 7 million. On a brighter note, the Canadian's won four Victoria crosses and solidified our independent identity from then on. Also winning this battle helped Canada earn a separate signature on the Treaty of Versailles which ended the war.

Vimy Ridge Heaven to Hell - Full Documentary
Here is a very interesting documentary which you can watch if you have time or want to learn more about Vimy Ridge. This documentary shows how Vimy Ridge was executed with cool facts and modern day visuals!
By: Arjan Cambo (529642) and Sahil Gandham (537558)

Arjan is using Smore newsletters to spread the word online.