Eight students at Aberdeen High School won state championships recently to qualify for the National SkillsUSA Conference and competition in Louisville, Ky., this summer. The annual Cowboy Barbecue fundraiser to help them defray costs is planned for 6-7:30 p.m. in the Commons at Aberdeen High School. Tickets are $10 each and can be purchased at the school or from any team member. READ MORE on the ASD5 web site. 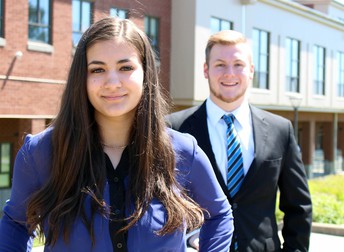 The students designed a complete and functional website for a fictional accounting firm, Accuracy Accounting, that includes everything you would expect to find from a high-powered corporate web site, including a mobile app.

Our CTE director, Lynn Green, told the School Board at its meeting on Tuesday that in the 22 years she has been in the district, this is the first time AHS has qualified a team to the national FBLA conference. The students are advised by Cami Revel and Tammy Heth.

Pictured above are Thalia Cook and Daniel Hunt. 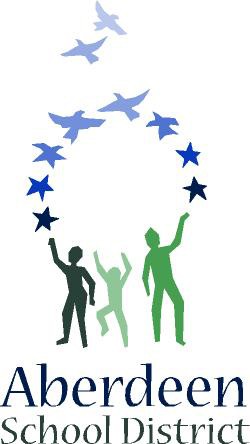 Summary of School Board of Directors Meeting

President Sandra Bielski convened the regular meeting of the Aberdeen School District Board of Directors at 5 p.m. Tuesday, May 7, 2019, in the Community Room at Aberdeen High School. Directors present were Jennifer Durney, Bill Dyer, Erin Farrer and Jeff Nelson, along with Superintendent Alicia Henderson, student representative Natalie Hurd and 28 patrons and staff. The meeting began with the flag salute. 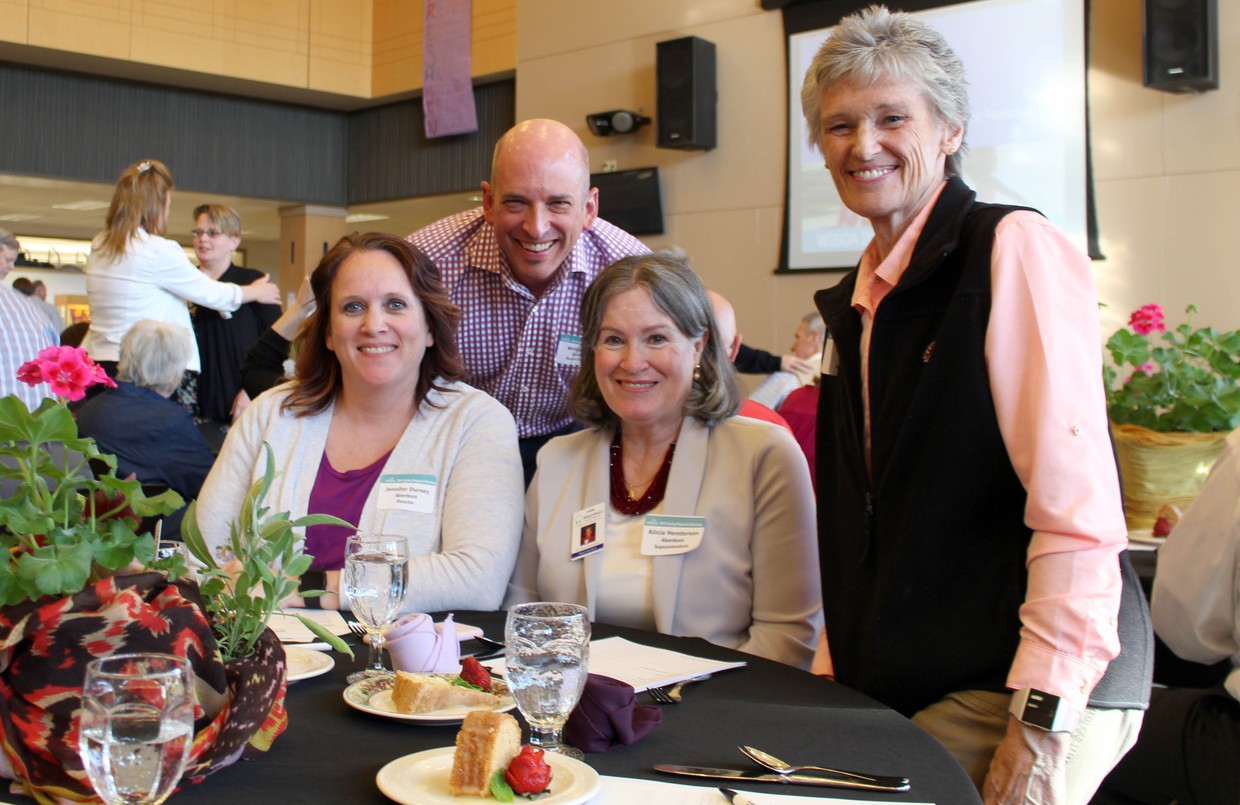 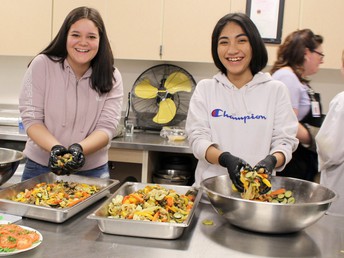 Comments from the Board

Director Bill Dyer commented that the school board members from throughout the region who attended the spring meeting of the Washington State School Directors’ Association were impressed with the high school facility, the atmosphere on campus, the food served by the culinary students, and the students themselves who served the dinner. He noted that the marching band was practicing, which added to the spirit of the event.

Superintendent Henderson also commented on the success of the WSSDA regional meeting that took place April 30. She said it was a great day to be superintendent in Aberdeen because of the many, many compliments on the beautiful school and outstanding culinary program.

President Bielski introduced Tina Miles, president of the Cosmopolis School Board, who has been attending meetings. 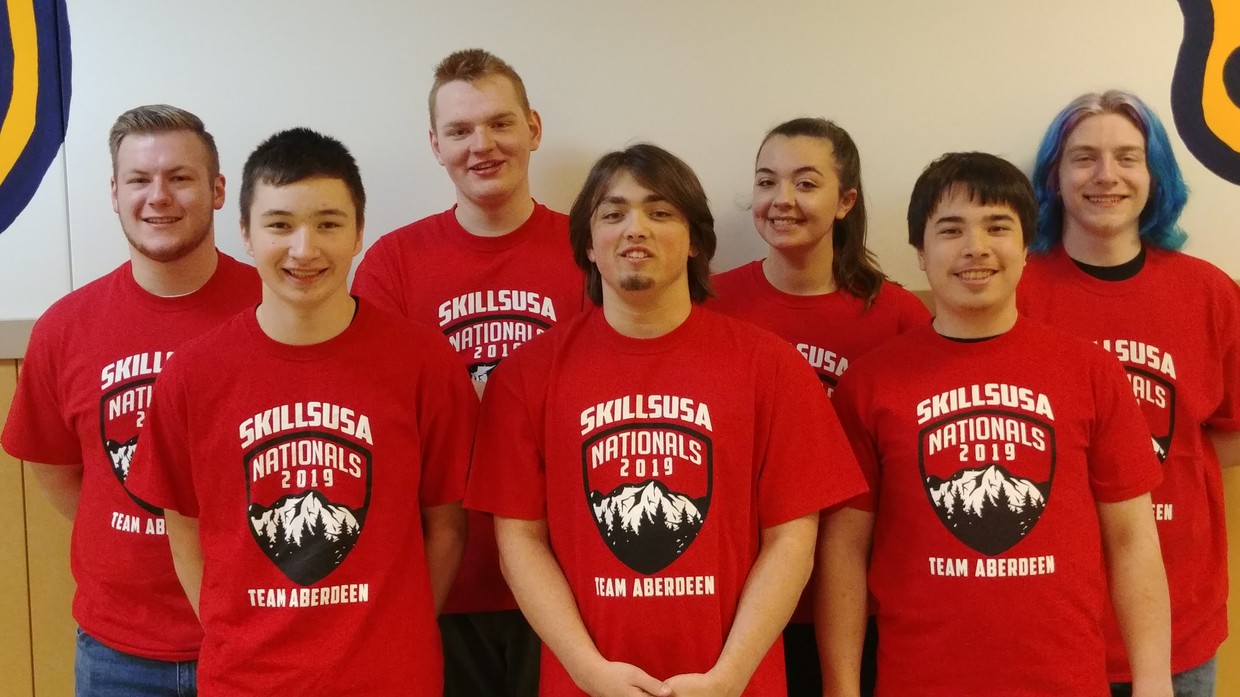 Chuck Veloni, AHS teacher and advisor to SkillsUSA, presented the state champions who will be traveling to the national competition this summer. He noted that in the past few years, Aberdeen chapter has fielded more than 20 students who have been Top 10 finishers at nationals.

Michaela Leach, president of the SkillsUSA chapter and member of the winning Entrepreneurship team, introduced the medalists:

Miss Leach announced that the annual SkillsUSA Barbecue will take place from 6-7:30 p.m. on Wednesday, May 22, in the Commons at Aberdeen High School. Tickets are $10 each and can be purchased from any team member or at the school.

CTE Director Lynn Green reported that in her 22 years with the district, she has not seen a student or team qualify for the national FBLA conference. This year, three students from Aberdeen High School will attend the National Student Leadership Conference in San Antonio this summer – Hunter Smith, Thalia Cook and Daniel Hunt. One of the students, Daniel Hunt, qualified for both the SkillsUSA and FBLA national events.

This week is Teacher Appreciation Week. Superintendent Henderson said she recognizes and appreciates the great work that our teachers do every day with our children.

Superintendent Henderson reported that principals and teacher leaders attended a conference in Spokane funded by a grant from ESD 113 to learn about integrating MTSS (Multi Tiered Support Systems) into the schools. She explained it’s the next step for the PBIS (Positive Behavior, Intervention and Support) and AVID (Advancement Via Individual Determination) work that is taking place in the district, which is to integrate the behavior and academic support systems.

Superintendent Henderson thanked Michelle Reed, Tracy Miner and Tina Palmer of the Aberdeen Education Association for traveling with her to Olympia to meet with legislators. She reported that they met with four lawmakers to discuss areas of concern regarding funding for education. She said they were well-received and it was clear they were there together to speak on behalf of Aberdeen.

House Bill 1599: Superintendent Henderson said this bill will have a significant impact in districts across the state as it now allows multiple pathways to graduation and delinks assessments as requirements for graduation.

Senate Bill 5082: This bill supports development of social/emotional learning standards and mental health counseling for students, including more coordination to bring providers into the schools.

K-3 Class Size Reduction: The Legislature did not postpone implementation of the K-3 Class Size Reduction requirement. Superintendent Henderson thanked the Board for its work on this issue. By moving 6th Grade to Miller Junior High School to free up elementary classroom space, Aberdeen is now one of the few districts that is not at risk of losing funding because K-3 class sizes are too high.

SEBB: Implementation of the new School Employees Benefit Board also was not postponed. Superintendent Henderson said this new health care benefit system will have an impact on every district in the state because it is significantly underfunded. She said the requirement to provide health benefits to part-time employees who work at least 630 hours per year will impact the district’s budget because most of the substitutes will qualify. The district planned for a 5 percent increase in benefit costs, which will not be enough to cover the cost of insuring more employees, she said.

Special Education: Superintendent Henderson reported that several bills attempted to deal with the fact that special education is underfunded. The shortfall in Aberdeen is $1.5 million. The bill that passed increases the multiplier for calculating eligibility and our district will probably receive an additional $150,000. In the second year, she said the multiplier will be greater for students being served in a general education classroom for more than 80 percent of their school day.

Senate Bill 5313: This bill lifts the cap on local levy requests from $1.50 per $1,000 of assessed property value to $2.50 per $1,000 of assess value. Superintendent Henderson explained that for 2019-2020 the district would be able to collect the increased amount in 2020, but after that the levy will expire and will need to go before voters to continue.

Hold Harmless Proposal: The Legislature approved funding for districts that did not benefit under the “McCleary Fix.” Superintendent Henderson said she expects that the one-time amount will be significant and that local lawmakers were very vocal in supporting it.

Superintendent Henderson reported that she is confident there will be additional funding for 2019-2020, but not all of it will be ongoing and that much more information is needed on how the funds can be spent before final decisions can be made on appropriations in the budget. Of concern, she said, is the expected increase in health care costs that will exceed the 5 percent increase the district had planned.

President Bielski commented that she was under the impression after the McCleary Fix that the state was done with “unfunded mandates.”

The bid to prepare the site for the new 6th Grade classrooms at Miller Junior High School was awarded to Rognlin’s Inc. of Aberdeen in the amount of $1.5 million. Elyssa Louderback, executive director of business and operations, reported that bids came in higher than expected and that Rognlin’s will be meeting with the architects and engineers this week for a value-engineering session to identify cost-saving measures. She expects Rognlin’s to begin work next week.

The schedule calls for installation of the new building to be complete in August and for teachers to have access to their new classrooms on August 14. A number of activities are planned to help students and parents prepare for the transition.

Athletic Director Aaron Roiko presented a report on the spring athletics, including information about the academic recognition the girls’ Tennis, Fast Pitch, Golf and Track and the boys’ Soccer and Baseball teams received from the Washington Interscholastic Activities Association, and information about two WIAA rule changes that might affect Aberdeen’s classification as a 2A district.

The annual agreement with the New Market Skills Center at Tumwater was approved. CTE Director Lynn Green explained that the agreement makes Aberdeen students eligible to sign up for skills center classes through New Market if the desired course is not offered through the Twin Harbors branch. She said the agreement has been in place for many years and it could become important this year as the cosmetology program may no longer be available locally.

CTE Director Lynn Green reported that the district is once again applying for the 21st Century Grant to provide before- and after-school programs. The district was funded for about 10 years but was not renewed last year. Another round for five-years of funding has opened with applications due May 31.

The district can apply for funding for up to four schools. She reported that after review of much data, the district is applying on behalf of Robert Gray, A.J. West and McDermoth elementary schools and Miller Junior High School. Concurrently, she said work is under way to find other funding sources for programs at the remaining schools. She noted that the YMCA of Grays Harbor will continue to be a primary partner in the district’s after school programming.

The Board approved personnel matters, including the 2019-2020 staffing lists for teachers, administrators and principals.

The next meeting of the School Board is set for 5 p.m. Tuesday, May 21, in the Commons at Aberdeen High School. The agenda is posted on the district web site no later than Monday before the meeting. 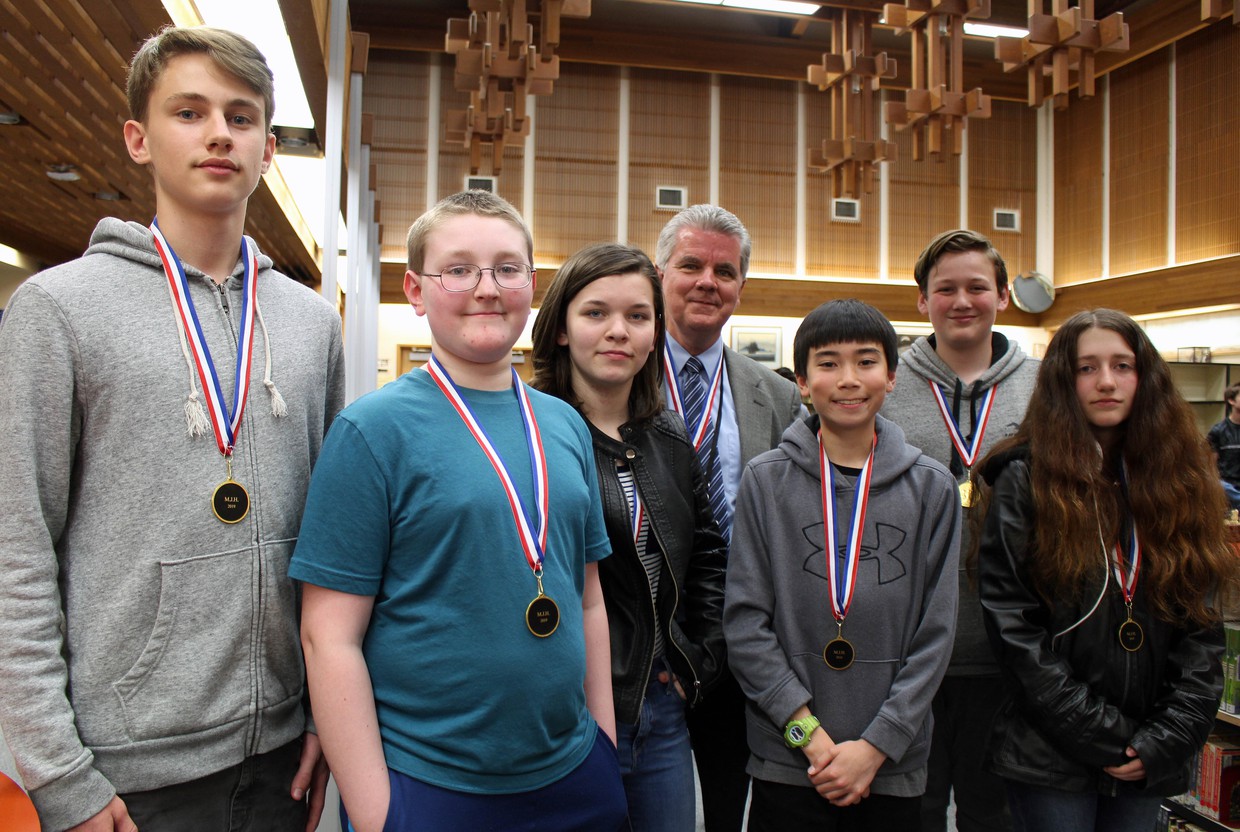 Chess champion Harley Greninger was at Miller Junior High School on Monday, May 6, to compete with students in the annual Miller Chess Tournament. Students at Miller play chess during their lunch periods and compete for weeks before the field is narrowed to the finalists who will play Mr. Greninger. The tournament has been taking place for more than 20 years. 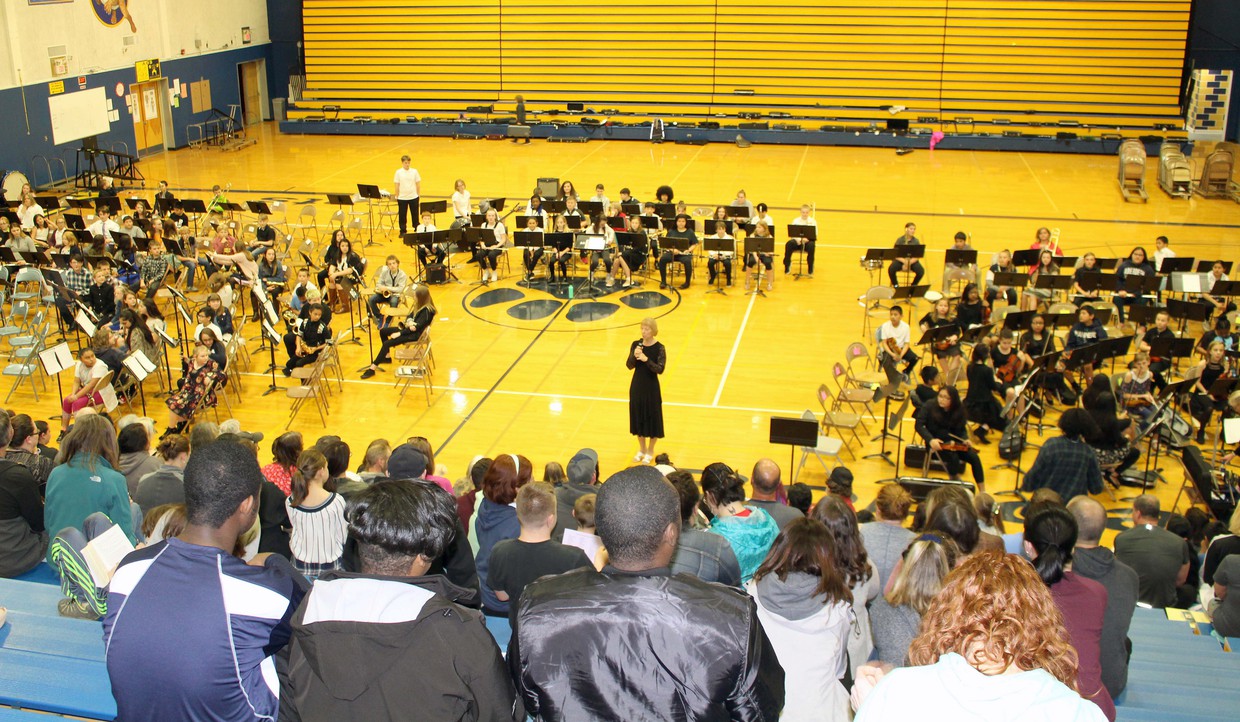 The All-City Concert is a long-standing tradition in the Aberdeen School District. It’s when music students from all of our elementary schools come together and put on a concert – and they glimpse the future when they’ll all be playing together. The 2019 rendition was another great performance April 25 at Sam Benn Gym.

Upcoming Events in May

May is a busy time. We hope this list of school activities and events is helpful.