The Currents of Space

A Novel of the Galactic Empire

The Currents of Space

A Novel of the Galactic Empire 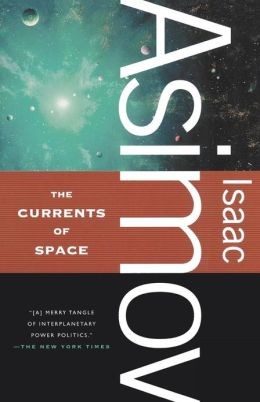 Rik is the main character of the book, he was found on a fiel in Florina with amnesia. No one knows who he is or where he comes from, the Townman decides that Lona will take care of him for an indefinite amount of time. The Townman does not happen what he will cause and who he was before.

Rik, remembers things which begin a series of events.

-Rik remembers he was a Spatio Analyst.

-Rik tells Lona that everyone on Florina will die.

"He was staring at her in horror. Everybody in the world is going to die. Everybody on Florina." Pg. 25

-Rik recognizes the Townman when he was dressed as a patroller.

-Rik explains Lona what the currents of space are:

"Well you see that's complicated. You see, the arrangement of elements isn't the same everywhere in space. In some regions there is a little more helium than normal;in other places more sodium than normal: and so on. These regions of special analytic makeup wind through space like currents. That's what they call them. They're the currents of space." pg. 96

-Rik remembers he comes from planet Earth, where the human race originated.

"He said, "it was on a ship that I came to Florina and before that I lived on a planet".

"It was as though the thought where forcing its way painfully through mental channels too small for it. Then Rik remembered and was delighted at the sound his voice made, a sound so long forgotten.

-Rik is taken to the library to investigate more about Spatio Analysis, but they end up having to knock down a patroller.

-The Townman explains why he didn't trust the Baker and left the Bakery during the night.

"Of course this baker was a Trantorian agent. He had no doubt about that from the first moment. Who else among dwellers in Lower City would have the capital build dummy radar ovens? He would not allow Rik to fall into the hands of Trantor." pg. 79

-The squire of fife gives importance to the disappearance of a Spatio Analyst and the crimes the Townman has committed and ties them with other details which make him believe all these events are related.

What are you waiting for, read this great book!

If you read the book you'll get to know more in detail all these events and have the perspective of the author.

By the way, Isaac Asimov is believed to be the greatest science fiction writer of all time... However, I think it's Arthur C. Clarke.