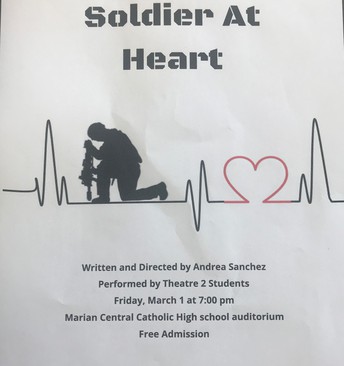 Please join us for the PREMIERE of our very first Student-Written/Directed One-Act Play, A Soldier at Heart, by senior Andrea Sanchez! The entire Theatre 2 class will be acting in and producing this amazing show and EVERYONE IS WELCOME to this FREE ADMISSION EVENT!

Don't miss this opportunity to be able to one day say, "I remember seeing her FIRST PLAY..!"

Due to the multiple snow days and weather-related late-starts, we have empowered our teachers to determine if they will be ready to administer an exam during the designated Quarter 3 exam times (March 7-8). Many teachers will be administering Quarter 3 exams as scheduled; others, however, will use this week to continue with their instruction, deferring assessment until the unit objectives are met. We do this to uphold the primary objective of assessment: to check for mastery of the content. If instructors believe, due to the weather-related interruptions, that they need more time prior to proper assessment, then we fully support that professional decision. Quarter 3 will end on March 8th.

End of Year calendar for grades 9-11 has been extended to MAY 31st due to use of snow days!

Check out our detailed Athletic Calendar for all practice times, team dinners, and "Away" games for this week!

Please join this special team organized through our amazing Parent Association to help plan the SENIOR BREAKFAST that will be celebrated on May 20th!

Our next Senior breakfast meeting will be Monday, March 4th at 7 o'clock in the Annex!

If you are unable to attend this meeting, but would like to learn about ways you can help with this event, please don't hesitate to contact our MCCPA President, Mrs. Lori Lee at ll524@comcast.net or give her a call at (847) 309-0702!

We are so excited to work together to make this the best Senior Breakfast!

NHS will be holding a BICYCLE DRIVE!

Why: To help provide those in need with a mode of transportation

Where: Drop off by George Harding Field

Please consider donating new/used bikes to this cause

Adult bikes preferred but any size is acceptable

The Marian Central Catholic H. S. Library is offering an opportunity for Sophomores and Juniors to take a complete practice ACT test, spread out over two after-school sessions. The testing will take place on March 14 (2:30 - 5:00) and March 15 (2:30 - 4:00). These are official practice tests from ACT, and students will receive scaled scores for each test section and subsection. This is an opportunity for Marian students to get an idea of the types of questions they will be seeing on the real test. They will also experience the ACT testing environment, complete with proctored instructions, ACT rules, and more than one test in one sitting. Test seating is limited to the first 25 students to register. If you are interested, please print the form linked below, complete the signature block, and return it to the Marian library no later than March 11. You will be notified by e-mail once your form has been received. Watch the Marian website for up- to-date information on the number of seats available.

Before you know it, PROM SEASON will be upon us all! Soon, all Junior and Senior families will be receiving (via email) the official PROM 2019 Information Sheet - that will contain everything you ever wanted or needed to know about our annual Prom event!

Just to give you a sneak-peek, below find two snippets that will help you as you plan that event!

Have a dress you're not quite sure about? Snap a pic and email it over to Mrs. Loy! cloy@marian.com She tries to respond very quickly! 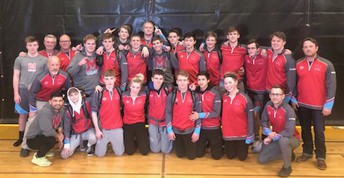 CONGRATULATIONS TO OUR WRESTLING TEAM FOR EARNING 3RD IN STATE!

CONGRATULATIONS to our Wrestlers for their accomplishments at the TEAM IHSA 2A STATE COMPETITION!

Quch jar chu' jaj wa'Dich to the Marian Central Community! I’m back after a short hiatus! Registering rising seniors en masse for classes is, in a word, demanding!

First, let me begin by thanking everyone who attended our College Information Night last night and provided feedback on our program. The “reboot” of this program was well-received and the evaluations have given us some fantastic insights as we look ahead to what next year’s version of this program will look like. We appreciate your support of our efforts to provide information about college to the total school community.

We’re getting into the time of year when financial aid awards and late-round admission decisions are hitting the streets and winding up in students’ hands. For some, this is a time of excitement; they learn that schools they really want to attend are attainable and affordable for their families. For others, the arrival of these awards, or perhaps letters of rejection from highly selective colleges after being deferred from an early admission round, produces more anxiety and uncertainty. Those “first choices” are now outed as unrealistic. Students enter Elisabeth Kübler-Ross’s and David Kessler’s stages of grief, starting with denial, moving to anger, then trying to find a way to make the impossible happen through bargaining, and then feeling lost when they realize that there’s nothing they can do to change the fact that schools they’ve fallen in love with have been yanked out of their reach.

But there’s a fifth step in this process; acceptance. It doesn’t happen immediately, and if it does it isn’t always total acceptance. Students begrudgingly attend their second, or maybe even third choice schools, convinced that life has cheated them. They’ve been sentenced, it seems, to seeing pictures of their friends on Instagram, at other colleges, living the good life and having the kind of experiences they’re convinced they can’t have.

Bruni is an op-ed columnist for the New York Times. From 2004 to 2009, Bruni was the Times’s chief restaurant critic. But in March of 2015, Bruni ventured into the world of college admission with a book that loudly and clearly stated what adults in college admission offices, high school guidance offices, and sitting across from students at kitchen tables in homes across America have been saying for years. Where You Go Is Not Who You’ll Be uses statistics, surveys, and the stories of hugely successful people who didn't attend the most exclusive schools to demonstrate that many kinds of colleges, from large public universities to tiny hideaways in the hinterlands can serve as ideal springboards into adulthood and vocational satisfaction. Bruni illuminates how to make the most of the opportunities these colleges provide. What matters in the end, Bruni illustrates, are a student's efforts in and out of the classroom, not the gleam of his or her diploma.

We’re still two months away from May 1st, or as we call it in the business, “National Candidates’ Reply Day.” As students begin to narrow their college options for one reason or another, it’s important to remind them that plans may fall apart, but dreams and goals are made of much stronger stuff. Just because they can’t be realized or achieved at that one college doesn’t mean that they should be thrown away completely. The absence of an offer of admission doesn’t mean the absence of worth. No one, in my opinion, does a better job highlighting this than Frank Bruni does.

I invite you to take a moment to read the following excerpt from Where You Go Is Not Who You’ll Be and to reflect on it. Read it in a quiet place where you can focus on Bruni’s message. Share the message with a student who might be going through one of those stages of grief about his or her college plans. Remind that student that attending college is a privilege and that he or she is blessed to have an opportunity to further his or her education when so many in our own state of Illinois don’t have it. Most of all, let that student know that his or her gifts and talents haven’t gone unnoticed…and that the college they’ll attend will help them maximize those gifts and talents in ways they can’t even begin to imagine. Actions like these will help students move into a healthy form of acceptance, showing them that, truly, where they go is not who they’ll be.

With that, I’ll yield the floor to Frank Bruni… 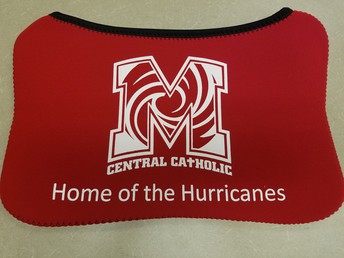 We have a limited supply of red Marian Central laptop sleeves available for purchase.
The sleeves are the perfect size for the laptops our students are currently using.

Each sleeve is $10 each and can be purchased in the school office.
Available while supplies last. 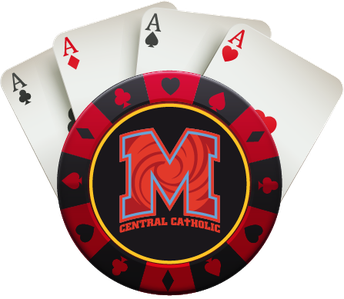 Join us for Marian Central's largest fundraising event to support tuition assistance! The evening will feature dinner, live entertainment, drinks, and silent and live auctions. There will also be professional gaming tables for Poker, Roulette, and Blackjack. Tickets are $50/person or $500/reserved table of 10, and can be purchased at highroller.givesmart.com. Admission is FREE with purchase of a Super Raffle ticket. Formal invitation to follow (see below!) 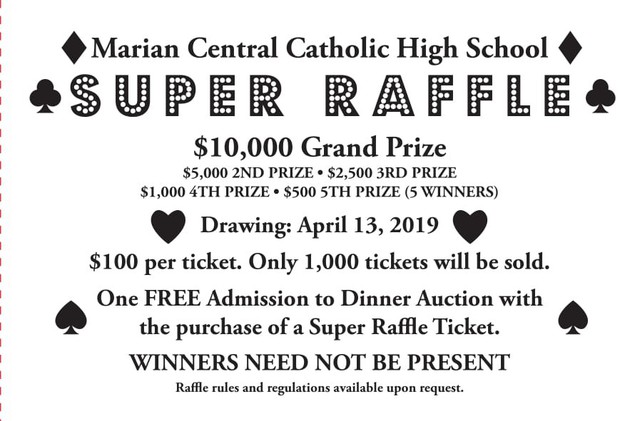 STUDENTS: Earn a DAY OFF OF SCHOOL (Juniors & Seniors) or a DRESS-DOWN WEEK (Freshmen & Sophomores)

As part of the fundraising for the auction, Marian Central is holding a Super Raffle! Students are encouraged to sell tickets, but are NOT required. The competition will be between Juniors/Seniors and Freshmen/Sophomores.

Tickets are now available for pick up in the Development Office or at highroller.givesmart.com, and must be returned with money by April 5th.

Juniors and Seniors - excused from school the day of Prom (Friday, April 26)

It's Time to Collect SENIOR BABY PHOTOS for the Yearbook!

It is the time of the year where the yearbook, The Memorare, is collecting baby photos of the Senior class. Photos should be appropriate and tend to be around ages 6 months-2 years. We ask that these photos be clear and scannable.

Senior students will be turning in their baby photos to their English teacher. We will return these photos in the same condition, we just ask that the following information is provided on the back of the photo:

*STUDENT’S PARENTS MAY CHOOSE TO EMAIL THE IMAGES AS WELL! THEY NEED TO EMAIL THE JPEG IMAGE TO “kgallagher@marian.com” AND HAS TO IDENTIFY THEIR STUDENT WITH FIRST AND LAST NAME! MUST BE IN JPEG FORMAT!!!

If your student(s) chooses not to submit a photo, he or she will have no smaller photo next to their official portrait. The space will simply be left blank. To guarantee every Senior has a photo, we ask that students bring their photos in NO LATER than Thursday, March 14th, 2018. We will return the photos once they have been successfully scanned into our system.

Should you have any questions, please contact Miss Gallagher (kgallagher@marian.com). We look forward in creating a lifetime of memories for the Class of 2019!

Marian Central is blessed to have incorporated into the curriculum FORMED on Demand which is an Internet-based subscription service offering access to thousands of studies, films, audios, and eBooks. Join Now!