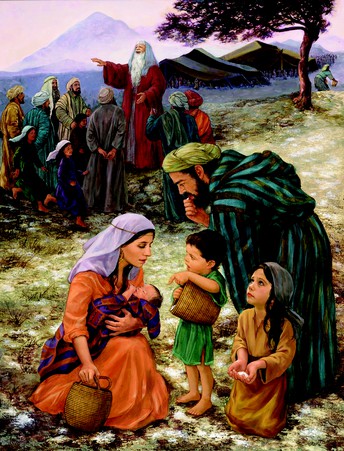 When was the last time you were really, really hungry?

After more than four hundred years of living in Egypt, much of that time as slaves, the Israelites (a group of around two million people) were delivered from slavery. They crossed through the Red Sea toward the Promised Land. God Himself guided them with a pillar of cloud by day and a pillar of fire by night. At first, the people were overjoyed, and they sang praises and danced for God. But soon they began to lose faith in the God who had delivered them. Just a month after their deliverance, the people began to grumble at Moses and Aaron, clamoring for food and saying they wished they were back in Egypt, where they had eaten meat and bread to the full

(which, incidentally, wasn’t true, since slaves were rarely given meat to eat). God graciously heard their grumbling and provided them with manna, bread from heaven.

Dear God, we often think we don’t have enough. Help us remember that You provide us with all that we need. In Jesus’ name we pray. Amen.

The Israelites grumbled because they were hungry and they didn’t trust that God would provide food for them. God still had mercy on them and gave them manna to eat.

We also grumble when we don’t get what we want, when we want it. We sometimes forget to trust God too. Sometimes, we’re not satisfied with the things that God gives to us. It’s because we’re all sinful. Instead, we should trust God. He will give us what we need. Then we can thank Him!

Share one thing you are thankful for. We are especially thankful to God for sending Jesus to be our Savior!

Dear Jesus, give us grateful hearts. Thank You for sending Your Son, Jesus, the bread of life, to be our Savior. Help us to share this good news with others. In Your name we pray, Jesus. Amen.