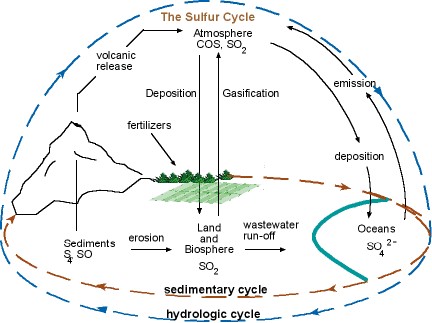 Sulfur can be found in rocks, the ocean, plants, and many fossil fuels. Sulfur moves naturally throughout the environment because of wind, water erosion, and even volcanic eruptions. Humans put sulfur into the atmosphere when we burn fossil fuels. Eventually, the sulfur will fall back to earth in the form of precipitation. From there, the cycle will start over again.

Sulfur can be found all over the earth. From living or once living organisms like plants and decaying animals to deep in the ocean buried in rocks and sediment. Most sulfur can either be found in the ocean, around volcanoes, in the soil we walk on every day, and in the atmosphere. 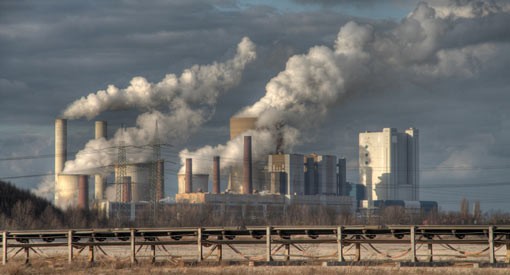 Humans have had a very large impact on the Sulfur Cycle. Everyday we burn coal and oil (which contain sulfur) in order to produce the electricity that is so common in our lives. When we do this, sulfur dioxide is released into the atmosphere, which is harmful to the environment as a whole. If we were to cut back on all of the fossil fuels we use, less sulfur dioxide would be put into our atmosphere, and therefore less damage would be done to the earth. 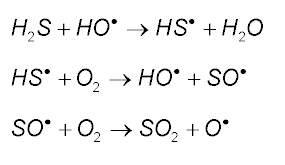 Hydrogen sulfide is oxidized to sulfur dioxide in the three steps shown above. 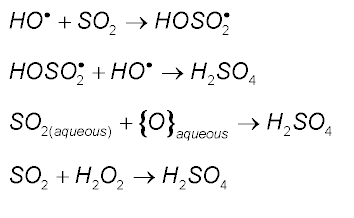 Sulfur dioxide is also dissolved in water droplets where it can react with oxygen to form SO42-, shown above. In order to get to it's final state sulfur has to change multiple times but physically and chemically. 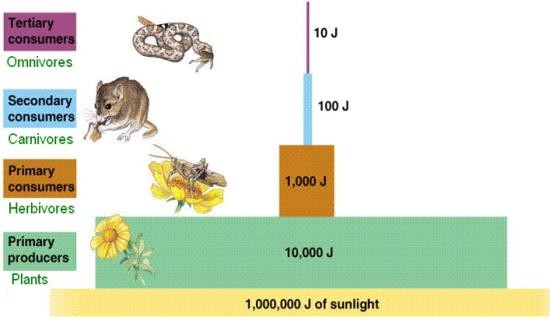 The 10 Percent Rule is used to explain energy transfer between trophic levels (levels that positions organisms on the food chain). When an organism consumes another organism, only about 10% of the energy remains. When an organism takes energy by feeding off of another organism/energy source, only about 10% of the energy from that food source is stored. For example, the sun produces 1,000,000 joules of light that is taken in by plants for energy. The plants will only retain 10,000 joules (10%) of the sun's emitted energy. This cycle continues on as the line of consumers grows.