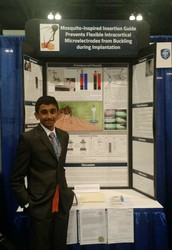 The rankings compile and review school-specific data on enrollment, college readiness, student ethnicity, location, school type, and results of state assessments and Advanced Placement tests. Of the over 28,000 schools reviewed, only 6,041 schools - one-fourth that U.S. News evaluated - were awarded gold, silver or bronze medals in this year’s rankings.

The GPD Group Employees’ Foundation recently announced nearly $515,000 in grant awards, including a $20,000 grant for Strongsville City Schools. The grant dollars awarded to Strongsville will help in the creation of “SHS Makes!” - a Strongsville High School MakerSpace area that features project-based learning labs to provide innovative spaces centered around Science, Technology, Engineering, Arts, and Mathematics (STEM / STEAM). We can’t wait for the MakerSpace area at SHS and the creative outlet this will provide our students now and in the future!

SHS Sophomore Emilia Lesniak won this year’s State Championship in the High Jump. This is Emilia’s first championship, after finishing fourth in her freshman year. She cleared 5’8” to earn Strongsville’s 4th straight first place finish in this event. SHS Graduate Cassie Martin, now a student-athlete at Duke University, was a three-time state champion high jumper for the Mustangs.

Recently, the National Art Honor Society (NAHS) partnered with the “Memory Project,” a non-profit organization inviting art students to create and donate portraits to youth around the world who have faced substantial challenges, such as neglect, abuse, loss of parents, violence, and extreme poverty.

A select group of eight NAHS members were matched to a foster care organization in Ukraine, where children have suffered tragedy due to the armed conflict in the eastern part of the country. Each member worked diligently over two weeks to craft portraits of these children that would remind them how valued and important they were and would offer them meaningful pieces of their personal history to retain in the future. For the students, it was a unique opportunity to creatively practice kindness and global awareness, ultimately culminating with seeing the children receive their portraits live. The project was chaired by SHS Senior Rubab Syed and guided by art teacher Ms. Kristi Trussa and Spanish teacher Ms. Tonya Barba-Minor. Click HERE to see a video recap of this project.

SHS Junior John Spragg will be attending the “Battles Won Academy” this summer in Washington, D.C., as part of his selection for the U.S. Marines Semper Fidelis All-American Program. John was nominated for this elite nationwide program by his baseball coach, Mr. Doug Cicerchi, and is one of only 95 high school juniors from the United States to be selected. The Academy features opportunities to network with peers, as well as hear keynote speeches and presentations from leaders in a wide variety of fields and industries. John says, “It’s a huge honor. It proves to me that hard work pays off. I am looking forward to being around incredible people and have the opportunity to learn and absorb as much as I can from Marines, and other students from across the country.” John is in the Criminal Justice program at Polaris and is involved in a number of school activities, including varsity football, varsity baseball, DARE Role Models, and Mustang Mentors Program. He is also a member of the National Tech Honor Society. Congratulations John!

Congratulations to the varsity baseball team who advanced to the State Championship game for the first time since 2006. After beginning the season with 4 straight losses, this year’s team went 25-5 the rest of the way, including wins against St. Ignatius in the District Finals, Medina in the Regional Finals, and Olentangy Orange in the State Semi-Finals. The Mustangs eventually lost to Massillon Jackson in the State Championship game. Three of this year’s seniors will be continuing their athletic careers at the college level: Jared Beechy (Seton Hill University), Kyler Damm (Marietta College), and Parker Shannon (Mercyhurst College).

The SHS Distinguished Alumni event returns in 2018. In partnership with the Strongsville Chamber of Commerce, another class of Distinguished Alumni will be inducted during a special luncheon on Tuesday, April 17, 2018. Nomination forms will be available beginning Monday, October 2, 2017.

Congratulations to the student staff of Strongsville High School’s newspaper, The Lantern. Their advisor, Ms. Mary Erste, had this to say about their recent results in the Ohio Scholastic Media Association (OSMA) Competition at Kent State University, “This talented group came together to produce a consistently well-rounded student newspaper. They have shown both individual and collective improvement in student voice and these awards are a testament to how much of a professional and hard-working group they really are.”

In addition to The Lantern winning Honorable Mention for overall newspaper, the following students won OSMA awards, competing against high school entries from the entire state:

Congratulations again to the Class of 2017! In June, Strongsville celebrated its 119th Commencement honoring the many achievements of this class. Student Council President Brooklynne Elliot, Phi Beta Kappa recipient Julia Foust, and Senior Class President Jaret Reimer, all presented speeches to the graduates. 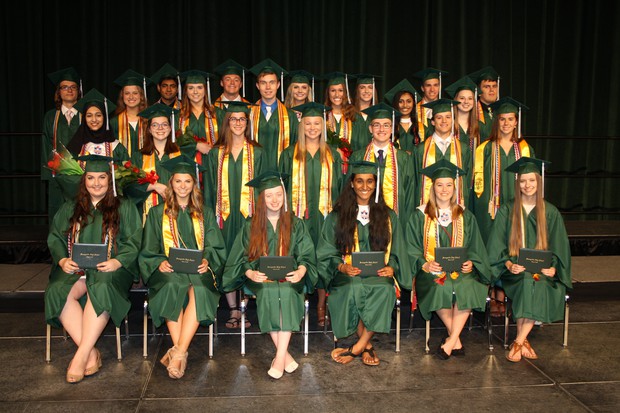 At the recent Ohio Association of Colleges of Teacher Education (OACTE) conference, Strongsville High School teacher Mr. Mike Rodak received the 2016-17 Gold Star Coordinator Award for his work in Career Based Intervention (CBI). Mr. Rodak leads the CBI program (Connections) at Strongsville High School, assisting students who are in need of extra support and helping them reach their fullest potential, both in and out of the classroom. With more than 300 similar programs throughout the state, Connections at SHS has been led by Mr. Rodak since 1997 and strongly supported by many local civic groups, including Strongsville Rotary and the Strongsville Optimist Club. At the same conference, one of Mr. Rodak’s students, Camerynn Bloom, was awarded a $1,000 scholarship. Camerynn intends to pursue a teaching degree and specifically wants to focus on being a science teacher for middle school students. Congratulations Mr. Rodak and Camerynn!

Strongsville’s Board of Education recently approved the hiring of Joe Guilfoyle as the next Strongsville High School Varsity Boys Basketball Coach. Mr. Guilfoyle most recently taught and coached at North Royalton High School for 23 years. Among his coaching accolades, he has been recognized as Division I Coach of the Year for the State of Ohio, a two-time Greater Cleveland Coach of the Year award winner, and selected as Coach of the Year in both Columbia and Richland Counties. He led the North Royalton Bears boys basketball team to back-to-back Conference Championships, a Sweet Sixteen appearance, and a number two state ranking during his tenure. Welcome to the Mustang Athletics family Coach Guilfoyle!

More than twenty local businesses participated in the first ever SHS Job Fair in May. Students were given the opportunity to sign up for ten minute interviews, as these companies looked to fill summer employment and part-time positions. Many students received job offers “on the spot!” The event also provided valuable interviewing experience for the participants. 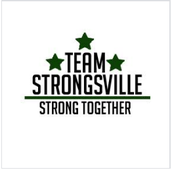 Don’t miss the first home football game of the season and celebrate with all of Strongsville during the 5th Annual Team Strongsville Tailgate on Friday, September 8th. Music, food, and fun begin at 5pm in the parking lot next to Pat Catan Stadium. The Mustangs then kick off the home portion of their schedule at 7:00pm against Canton Central Catholic. 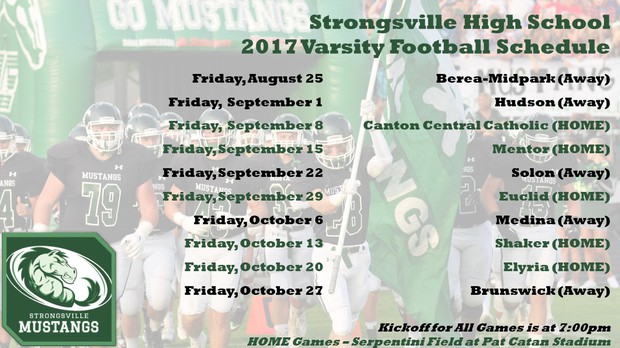 Congratulations to the following Strongsville High School and Polaris students who have recently competed in national competitions: