January is a great time for reflecting on the past and setting goals for the future. Students wrote private reflections for self-improvement and hopes for 2017. As the first semester drew to a close and student progress reports were being prepared by teachers, students completed a self-assessment of how they felt they were meeting the characteristics of a successful student. Whether we are sharing our feelings in class Meeting, doing our service jobs, cooking together, playing together, or learning together, we are a strong community.

In January, we began a reading unit on novels that have received the Coretta Scott King Award. The students read a biographical sketch of Coretta Scott King and learned about the selection criteria for the Coretta Scott King Award. The 5th and 6th graders are reading novels that received this award. The 5th grade students are reading The Watson’s Go To Birmingham-1963 as one literature group. The students respond to given prompts and hold discussions about the novel. We are enjoying the novel’s lively dialogue and interesting characters. The 6th graders self-selected Coretta Scott King Award novels to read independently. While reading their novels, the students complete summaries and write to respond from a given list of prompts. All students are learning how to elaborate on their ideas and support them with text evidence. In writing, the students read several short nonfiction informational pieces and practiced summary writing by identifying the main points and using the 5 w’s. The students listened to and read several mentor texts, short stories, to practice strategies for writing in response to reading. The students continued their word study lessons and quizzes.

What is the best choice for displaying and describing a set of data? What is the best measure of central tendency? Is it mean, median, mode, minimum, or maximum? Fifth graders have been collecting and analyzing data, such as “How many states in the United States have you visited?” to explore these options. Fifth graders worked with fractions, decimals, and percents and learned to make and interpret circle graphs as a way of representing data.

Students in 6th grade math finished Unit Four dealing with fractions, decimals, and percents and have started the Unit Five on geometry. After learning to convert fractions, percents, or decimals to degrees, students started working with coordinate geometry and transformations. Students demonstrated their skills by graphing coordinates and connecting them.

During the first weeks of January, students completed the first semester study of properties of matter and how matter can change. We experimented with the element Gallium, warming up the vials between our warm palms and then further warming them in beakers of hot water, until it changed states at 86° F from solid to liquid. Playing with liquid Gallium is like playing with the roly-poly properties of Mercury, but without harmful effects. Another especially fun science exploration was “pH Painting.” After coating papers with a red cabbage juice solution, students painted on several liquids such as lemon juice, borax solution, Alka-Seltzer solution, and dish soap to identify their pH as acidic, neutral, or basic.

Our second semester focus is the physics half of physical science. Students are currently reading from a new science reader, Energy, and are studying forms of energy. We have begun to work on the 2017 Bucks County STEM K’Nex Challenge: design and build a moving model of an eco-friendly amusement park ride. During partner time with the Fox Class, 5th and 6th graders will collaborate with 3rd and 4th graders to create an entire model amusement park! 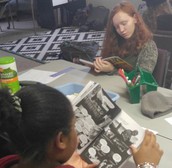 Students were introduced to the civil rights contributions of Georgia fifth district Representative, John Lewis, the former chairman of the Student Nonviolent Coordinating Committee. To learn about his early life, students read the Graphic Novel March: Book 1 from the critically acclaimed March Trilogy. After reading March: Book 1, students chose one lesser known figure from the civil rights movement to research and write a children’s book about. As a part of prepping for our children’s book, students chose different children’s stories and biographies to review. They then discussed with their classmates the different styles that were used to write and illustrate their books. Students are currently in the process of writing their children’s novels.

In current events this month, we have discussed the Syrian peace talks, the inauguration and the changes to White House policy under President Trump, issues of global trade such as tariffs and free trade agreements, reunification talks in Cyprus, cabinet appointments, Israeli settlements of the West Bank, the presidential crisis in The Gambia, and the commutation of the sentence of Chelsea Manning.

It was wonderful to welcome everyone back after winter break. In January, students began a classic book unit. Each student self-selected a “classic” novel to read. While the readers worked their way through the novels, they completed reading summaries and responded to journal response prompts. The readers are practicing their critical reading skills by reflecting, analyzing and evaluating. Students will also share their insights into these classic reading selections with their peers. At the end of the month, we will discuss common themes, authors' messages, and further discuss the definition of a classic. In writing time, the students drafted expository essays explaining self-selected inspirational quotes. The writers are required to analyze their quotes and explain how the quote applies to their lives, literature, and/or the world. Students continued their word study lessons and quizzes.

The 7th grade math class has finished the first semester phase of their work with fractions and has moved on to studying positive and negative numbers and how they interact in operations. They are learning to “think in” negative numbers and to understand why arithmetic operations work as they do in this context. For instance, it is not enough to know the rule that subtracting a negative number makes your starting number become higher. Rather, the mathematics lies in understanding why this occurs.

The 7th graders are learning to work more independently, moving in several directions with their efforts. Some are reviewing concepts that have been particularly challenging for them, some are beginning to work with algebraic expressions and equations, and some are exploring other areas of interest for them. (Some are doing all three.) They are finding out what it means to take responsibility for always moving forward in their learning, both at school and at home.

The 8th grade class is continuing to work in this independent manner, learning about mathematical concepts ranging from solving complex equations and working with proportions, through exploring linear equations, to solving systems of linear equations.

Of course, we always make some time for work with puzzles. Here is a recent puzzle the classes worked on:

· You may use a negative sign in front of any number, even the 2

· You may use parentheses to group calculations

· You may use any of the last three digits as exponents

What happens when you drop Mentos candy into a big bottle of Diet CocaCola? An explosion of soda into the air! Ask a 7th or 8th grader to explain to you why this happens with Diet Coke but not regular Coke and why raisins “dance” when dropped in seltzer. Hint- what kind of surface do bubbles like to cling to? What happens when you coat paper with red beet juice and then paint all over the paper using lemon juice, borax solution, alka seltzer solution, and more? Ask a Middle School student to explain to you about pH indicators, hydrogen ions, acids, bases, and the pH scale. Making mayonnaise turned out to be a bit runny but definitely an example of a colloid.

We ended our chemistry studies with a bang and have now begun our second semester of physical science with an emphasis on physics. We are reading Newton’s Toy Box as an information source to learn about forces and motion and we are busy with experiments in speed, velocity, acceleration, friction, gravity, and momentum. Which takes longer, a basketball rolling down a ramp or a pingpong ball rolling down the same ramp? Ask a student about our results!

Three inventions made by six students were selected as finalists in the PA Middle School Invention Competition. We are headed to Hershey for the Pennsylvania Educational Technology Expo and Conference as finalists.

Students worked on finishing touches for their Native American portfolio projects. After they finished their projects, we decided to explore the Civil Rights Movement using March: Book 2 from the critically acclaimed March Trilogy by John Lewis and Andrew Aydin. March: Book 2 deals with the intricacies of the 1963 March on Washington for Jobs and Freedom and Freedom Rides. After reading March: Book 2, students chose a lesser known figure from the civil rights to research and prepare to write their own graphic novel, choosing a small portion of their life to focus on.

In current events this month, we have discussed the Syrian peace talks, the inauguration and changes to White House policy under President Trump, issues of global trade such as tariffs and free trade agreements, reunification talks in Cyprus, cabinet appointments, Israeli settlements of the West Bank, the presidential crisis in The Gambia, and the commutation of the sentence of Chelsea Manning.