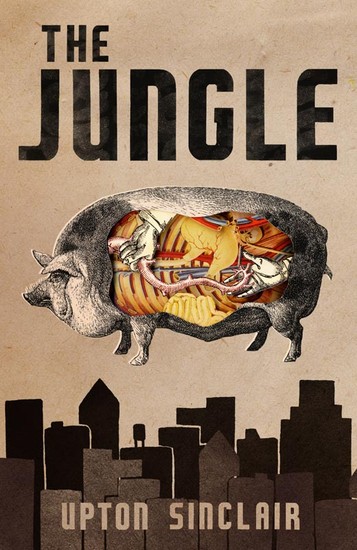 "as for the other men, who worked in tank-rooms full of steam, and in some of which there were open vats near the level of the floor, their peculiar trouble was that they fell into the vats; and when they were fished out, there was never enough of them left to be worth exhibiting,—sometimes they would be overlooked for days, till all but the bones of them had gone out to the world as Durham’s Pure Leaf Lard."

Jurgis is Lithuanian immigrant that moves to Chicago, in hopes to follow the American Dream. However, as soon as they arrive they are greeted by depression and disaster. As they attempt to get jobs, Jurgis and his family get familiar with the horrors of "packing town." Shortly after Ona gives birth to Jurgis's first child and shortly after becomes pregnant again. Soon after Antana's birth, Jurgis becomes injured and can't work. When Ona gives birth to their second child both her and the baby die. Next, Antana drowns in the river while playing. This throws Jurgis off the deep end and he leaves packing town. After living in the country he decides to move back and tries to find work. But he is on the blacklist and can only get work in a mine, where he then breaks his arm during a faulty explosion. After living on the street he is found by Ona's grandmother who tells him where Ona's cousin is. He finds Marija working for a brothel; the book ends with Jurgis attending a rally where he becomes a socialist.

What is a reoccurring Symbol?

A reoccurring symbol in this book is depression and death. Juries has many of his family members die in this book, and every page leads to a deeper depression for Jurgis.

What was the author’s purpose for writing this book?

The writers purpose of this book is to promote socialism and to share the horrors of manufacturing before unions become a vital factor in factories.

The tone was so depressing and you can even feel yourself sinking when you read the book. The horrors of the book made you feel so oppressed and makes you think the world is evil,

What interesting or notable facts do you know about the author?

Upton Sinclair was born in Baltimore in 1878 and was raised in poverty. While attending the College of the City of New York, he wrote dime novels to help pay for tuition. in 1915, he moved to California and ran for governor four time. He has over 100 works of literature.
Upton Sinclair's The Jungle SchoolTube
Video

Follow Owen Wurst
Contact Owen Wurst
Embed code is for website/blog and not email. To embed your newsletter in your email, click HERE to see how or reach out to support@smore.com