reed is using Smore newsletters to spread the word online.

Get email updates from reed:

a man who discovered that there are more Galaxys out there

a man who discovered that there are more Galaxys out there

A Smore by Reed Wilson 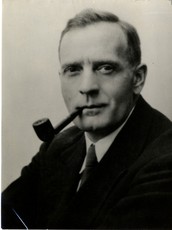 Edwin Hubble where do i begin? Edwin Hubble was born November 20, 1889
in Marshfiled Missouri and died at the age of 63 in San Marnio California. But today i will give you a lesson on what happened between those very dates. (November 20, 1889 and September 28, 1953)One of the many great things Edwin Hubble did was discover there are many different galaxies like the milky way. Edwin Hubble also determined that the farther a galaxy is from Earth, the faster it appears to move away. He also gave some rock hard evidence about the big bang theory and also got other people to look into that and we know how talked about the big bang theory is know a days. Edwin also served in world war one so hes famous from being a great scientist and serving in the war pretty cool huh. To my surprise Edwin Hubble did not win a nobel prize because at the time the nobel prize people did not recognize work done in astronomy, sucks for him if only he one that prize. I mean the man made the worlds biggest telescope, if you could not tell this man changed the world in astronomy. There you have it a brief history lesson on Edwin Hubble 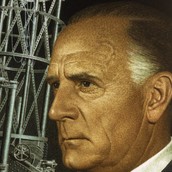 An colored picture of Edwin 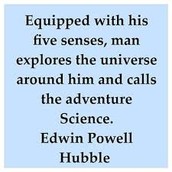 An amazing quote from Edwin Hubble

reed is using Smore newsletters to spread the word online.

Follow reed wilson
Contact reed wilson
Embed code is for website/blog and not email. To embed your newsletter in your email, click HERE to see how or reach out to support@smore.com