Get email updates from Raymond Central: 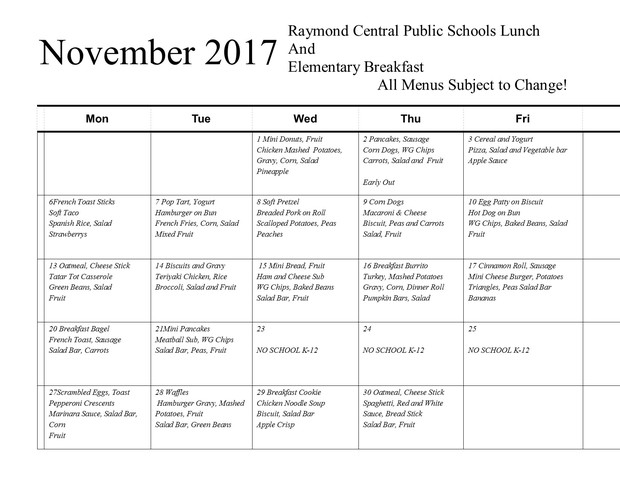 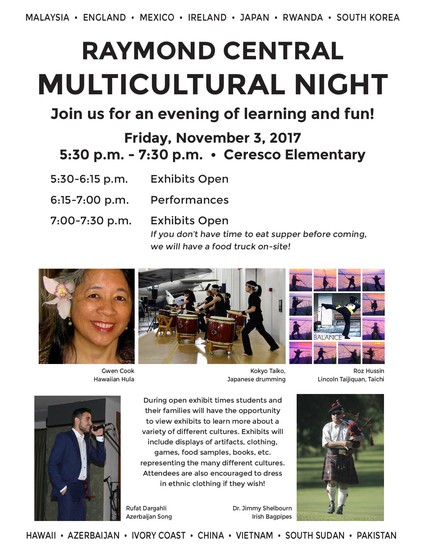 Raymond Central Senior High Student Council is hosting a blood drive with the Nebraska Community Blood Bank at the High School on Friday, Nov 10th from 10:00 to 1:30. Blood is needed every day in order to guarantee that the blood supply will be there for our surrounding communities. Blood Drives are the vital part in maintaining that blood supply. By donating we help patients in Lancaster, Saline, Seward, Polk, York and Jefferson counties. Not only do we help patients in the area we are also providing scholarship funds for RC seniors through the Nebraska Community Blood Bank. Every time we reach our goal the NCBB awards us scholarship money to give to our graduating seniors. NOTE: Students 16 years of age are now eligible to donate with written parental consent. Consent forms must be completed and turned in to Ms. Dannelly prior to Nov 10th. Please consider giving the gift of life. If you would like to donate blood please contact Janet Dannelly at 402-785-2685 to schedule a time, drop-ins are also accepted.

Tickets can be purchased from Patti Schnieder, Suzy Fredrickson, or Torie Oldfield 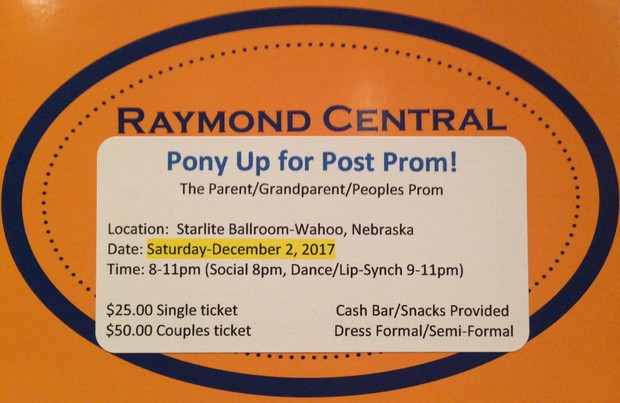 Couple dates of importance for athletics/activities:

From the Desk of Superintendent Dr. Derrick Joel….

As the new superintendent for Raymond Central Public Schools, I am required to be evaluated by the Raymond Central Board of Education (BOE). My contract requires two evaluations during my first year of service. The BOE is interested in using a different format to accomplish this task and will be seeking input from a variety of stakeholders within the district. The evaluation model selected by the BOE is called a 360 Degree Evaluation. We are working collaboratively with the Nebraska Association of School Boards (NASB) to accomplish this task. Brief surveys are being developed to disseminate to various stakeholder groups thus allowing administrators, staff, students and community a pivotal role in the process. Surveys will be distributed by NASB to randomly selected participants to capture performance data using an instrument called Survey Monkey. All survey data will be compiled by NASB and then shared with Raymond Central BOE and myself. It is our hope that this new process will provide me with constructive feedback relating to my goals and performance as I begin my tenure with the district. Keeping the process open and transparent is important to me as well. We will follow-up with the process again in the spring, hopefully noting growth in areas that need improvement. Also look for posts on the RC website regarding the process. If you have any questions, please feel free to contact me at the superintendent’s office at 402-785-2615 or email Board President Dr. Harriet Gould, drhgould@gmail.com. 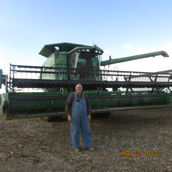 Farming Then and Now by Helen Andelt

Starting in 1956 at the age of eleven, Tom Trutna began helping his father farm. Technology has changed farming a lot over the last sixty years.

When Tom started farming, he had a tractor and a combine that you needed to steer yourself. He now has tractors and combines that steer themselves. He also has a planter that will change the population according to the soil type, and a combine that gives the moisture of the grain, and the yield per acre as you are harvesting.

Tom as a younger farmer spent much of his time preparing his fields for planting. Many hours were spent pulling the plow, disc, and the harrow. Once the planting was done, many more hours were spent listing the corn to make ridges, go deviling, harrowing the ridges down, and cultivating twice, all with two row equipment.

Back then also, Tom had a lot of livestock. Chores took up another large portion of his day. Tom would need to milk the cows, take water to the stock cows, feed the pigs, sheep, and chickens. At different times in the year, butchering of the animals would be another farm job that would need to be done. Tom now has no livestock.

The crops that Trutna planted when he first began have changed tremendously. Corn, grain sorghum, sorgo for feed, oats, wheat, and alfalfa, were the crops of the past; all grown on 320 acres. Now Tom only grows corn and soybeans, and farms around 700 acres.

A farmer’s wife also has many important jobs. His wife, Anona, helped with chores, took care of the children, housework, made food and drove it to the field, ran to the dealership for parts, helped Tom move from field to field, and also did the bookkeeping. Later, as farming changed, and the children grew up, she also got a job in town.

While farming has changed in many ways for the better, there are many things that Tom misses. What Trutna misses the most is farming with his dad, and it was much less stressful, even though there was more work. Today farming is much safer due to the new technology.

The question is, would Tom choose farming as a career over again? Absolutely! Between farming, the National Guard, wife, and children, it is what has made his life complete.

PSAT Results should be by back beginning of December.

Raymond Central Public Schools will be hosting a Book Fair!

Time: Purchases may be made all day-you MUST indicate the purchase is for RCPS both online and at the store!

Senior High Student Council will be doing a sweatshirt/sweatpant drive. We ask everyone to bring a new or used sweatshirt or a pair of sweatpants for those in need this winter. Used ones are fine if they are clean and in good shape. ALL sizes will be accepted. Items can be dropped off in the school Media Center. If you have any questions please refer them to the Student Body president, Cicely Pickel or Ms. Dannelly.

*Time frame details are to be determined and will be announced at a later date. 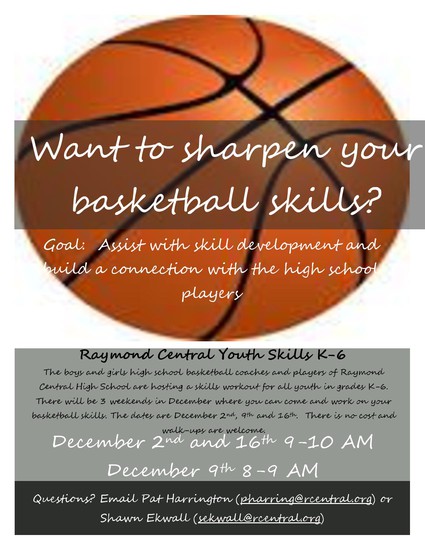 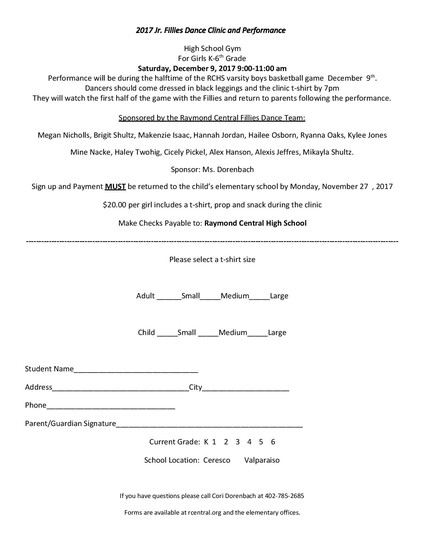 The MANE Event by Peyton Taylor

Word has it that Raymond Central senior Student Body President, Cicely Pickel, already has one of her main campaign goals in action. Pickel is one of two students, accompanied by junior, Peyton Taylor, making this change happen.

Pickel states, “I wanted to get more students involved in school activities and more school support at the various events.”

The Student Body President and Taylor created the idea of “The MANE Event,” replacing the old student section, “The Stang Gang.” Pickel’s reaction to the new and improved name was ecstatic, as it was the first step in the process of the project. Featured to the left is an image of The MANE Event's t shirts.

Cicely hopes that by implementing The MANE Event will create more school unity and a better student section, along with support!

FFA Fruit Sales are due by November 16th. Forms are located on the website or in the newsletter. Please contact a member to order your fruit.

State-Total of 30 Schools and located in Scribner 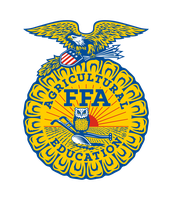 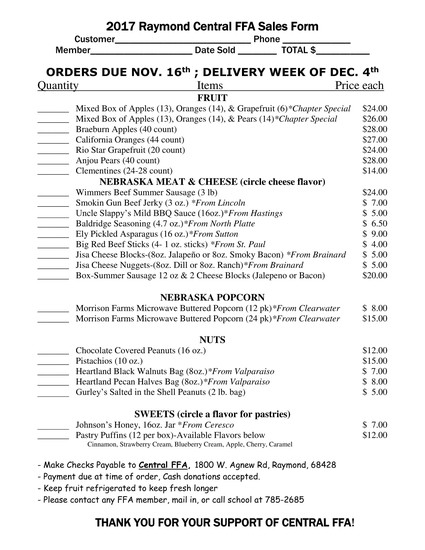 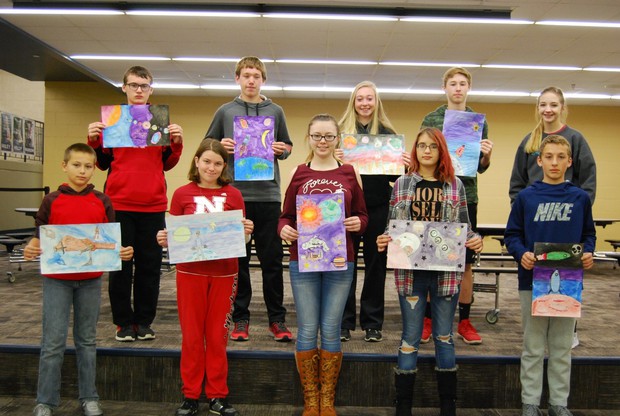 Ten 8th grade art students have finished their entries for the 2018 International Aviation Art Contest. This year’s theme was “Flight Into The Future”. The only limit to the future of flight is the imagination of builders, dreamers and pilots of today. These students had to show their own vision of what can happen next!

The marching band had a good season earlier this fall. They were excited to show off their new band uniforms purchased by the school. Their show was titled "The British are Coming" and featured the songs "Paint it Black," "A Groovy Kind of Love", and "Hey Jude." Led on the field by drum major Ellen Dexter who was 1 of four seniors in the band, (Matt Jackson, Mia Miller, and Brandon Unverferth), the show also featured soloist Matthew Jackson. They performed at the Capital City Marching Band Competition in Lincoln and the Oxbow Marching Band Competition where they were just short of receiving a Superior rating. 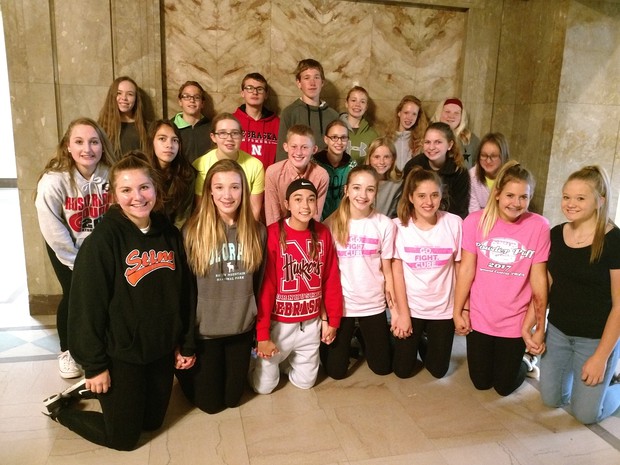 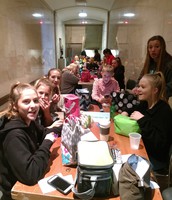 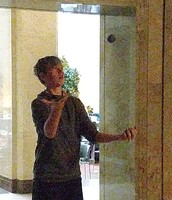 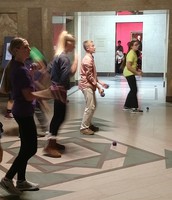 A big thank you to the Valparaiso Rural Fire District for their support with the pancake feed and providing emergency services for the run/walk. A special thank you to the Lower Platte South NRD who maintains the beautiful Oak Creek Trail and the City of Valparaiso for their support and cooperation. Paper products at the pancake feed were provided by CerescoBank, First Northeast Bank of Nebraska, and Oak Creek Valley Bank. Thank you! We appreciate the volunteers from the community and the RC Spanish Club who helped serve the pancake breakfast, too.