Get email updates from Hayley:

An Explication of Chapter One

An Explication of Chapter One 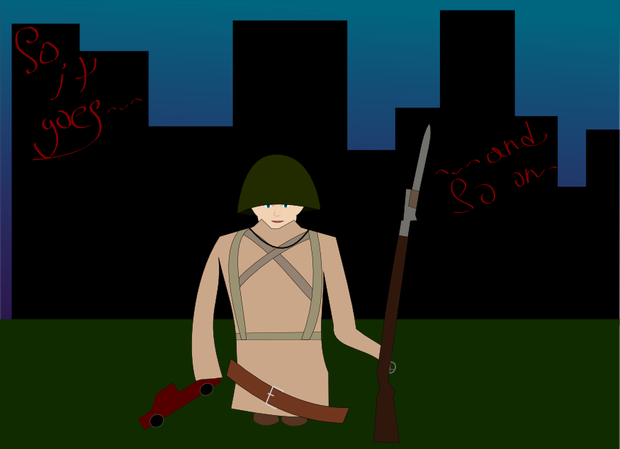 In Chapter 1 of Slaughterhouse Five, Kurt Vonnegut briefly describes his time in Dresden. He traveled back to Dresden with Bernard V. O’Hare, a former war buddy. While they were in Dresden, a taxi driver took them to the slaughterhouse where they were when the bombing took place. Vonnegut discusses how his book will be laid out and draws it out on his daughter’s wallpaper with crayons. He also tells about his visit with the O’ Hares. Mary, Bernard’s wife, did not like the war because the men fighting were innocent “babies” (Vonnegut 14). Vonnegut agrees with Mary’s statement, and says that if he ever writes a book about the war he will title it the “Children’s Crusade” (15).

Vonnegut uses a blunt tone throughout the first chapter to empathize his true feelings toward the war. Like many authors in the Post Modernism time period, Vonnegut uses straightforward sentences that help him achieve his blunt tone. “He is short and I am tall. We were Mutt and Jeff in the war. We were captured in the war” (Vonnegut 4). He uses this sentence structure to show that he wants to block out all the details that people would associate with war. He is reminiscent of war, but rather than focusing on the war itself, Vonnegut thinks about the people and their spouses and their children and their jobs and their lives and so on. His syntax helps develop his argument by using short sentences to emulate that of a child.

Based on the events in chapter one, Vonnegut’s argument is that the soldiers in the war are too young and innocent. He told Mary O’Hare that if he ever wrote a book about war, it would accurately prove that the soldiers were young men and not “war-loving, dirty old men” like “Frank Sinatra and John Wayne” (Vonnegut 15). Vonnegut is implying that throughout the book he will portray soldiers as the children that they are, and not old men. He leaves out the gruesome details of death and war because he wants to protect what is left of the children’s innocence.

Motifs are very important for the development of Vonnegut’s argument that soldiers in the war are too young and innocent. The most prominent motif is “so it goes.” He uses this motif when discussing death instead of going in to detail about the whole situation. “So it goes” symbolizes his argument by avoiding the gruesome specifics of a situation in Vonnegut’s life. “Old fart with his memories and Pall Malls” is another motif that represents that after Vonnegut was in the war and lived his life, he had no innocence remaining. His memories from the war are all horrific; they have scarred him and changed him into the person he is. The rhetorical value of each of these motifs is that no matter how old or young, a person is always vulnerable and impressionable.

Follow Hayley Pruitt
Contact Hayley Pruitt
Embed code is for website/blog and not email. To embed your newsletter in a Mass Notification System, click HERE to see how or reach out to support@smore.com
close