A Terror or Just a Terrier?

Shedding light on a serious issue

A Terror or Just a Terrier?

Shedding light on a serious issue 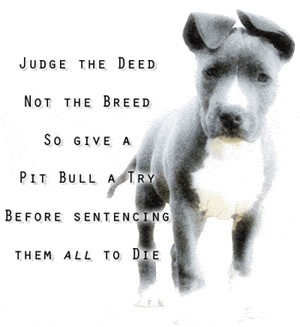 You walk into a shelter and you can already sense the misery of dogs but mainly the pit-bulls for they doomed to an inevitable fate . I strongly believe that pit bulls should most definitely be allowed as pets. First of all, is that they are incredible guardians. Another is that the are extremely good with kids. Finally they are not responsible for how they have been bred. Lets get barking!
Pitbulls are incredible guardians, this is because of their strong protective instincts. If you're doubtful then just listen to this amazing feat. Baby a pit bull belongs to Rhonda and Evelyn Westenberger,and has always been a house dong after being taken from a shelter. One fateful night, Baby was barking, howling, and just plain out throwing a fit. This caused her owners to awaken and the immediately understood what was wrong. Their house home to many dogs was on fire! Baby began to tug them by their clothes to safety. But she didn't stop there, She ran back into the flaming house and led all of the other dogs out. Her job wasn't finished yet, she ran once more to retrieve a frightened puppy carrying it by its scruff.The poor pup had been paralyzed by fear and would soon die, if Baby would have left it like any other dog would. What do you gather from this tale of heroics? I gather that pitbulls are amazing animals that obviously deserve to be pets. Also pit bulls have been labeled "nanny dogs" by many. If you aren't yet convinced just read ahead! 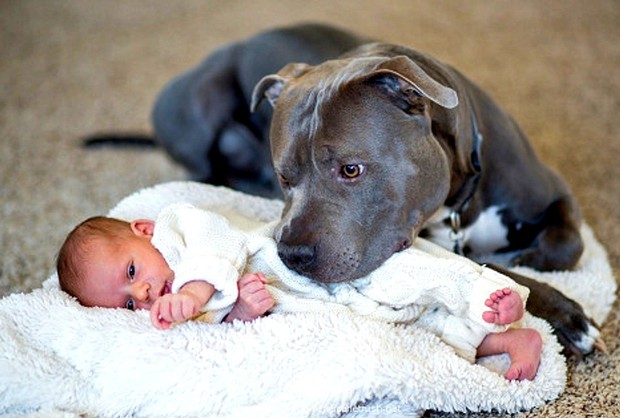 Perhaps you haven't heard, pit bulls are great with kids! This is because the are very friendly, sweet, and great cuddle buddies. Now don't let their outward appearance have you fooled, these dogs are as sweet as honey dipped in sugar. They are always looking out for their owners and family members. Just like how one kindly pit bull saved a mother and her toddler from a robbery, who I might add was not their owner! Not to mention ,when a child wandered away from her father and their pit bull brought the girl back safely. The AKC (american kennel club) even calls the "gentle giants" and "very people oriented".Their name might scare you, i meant "pit bulls" strikes fear in your heart doesn't it? Well this will give you a breath of fresh air. Their breed of dog is not "pit bull" but Stafford-shire terrier. Sound very noble doesn't it? Well these dogs will surely be royal friends!

With no further ado I will show you my most treasured point. When you were growing up, did you ever per say want a different color hair or eyes? Well, you of course could not go out and buy new eyes or hair. This is the same situation with pit bulls, they cannot change their genetic material. They will always be pit bulls, they will always be called murders, and monsters. That is unless, we step as human beings that have empathy and save them from their doom. They have proven time after time again that they deserve love, and sympathy.But, to no avail for they are considered the most hated breed of dog. Perhaps, a child was bit and killed by a poodle. Would the public go into a absolute rage suggesting death for all poodles? No, they would provide excuses of poor up bringing or freak accident. Yet, a perfectly nice pit bull so much as nips at a child or other animal, and the uttermost worse is assumed when no one actually knows exactly what happened. Whose fault is it that these poor creatures suffer, humans that's who. They have bred these dogs to angry and digressive then starved them and abused them. So ponder the actions of your fellow humans that have such sick, and twisted minds to use an animal for such cruel internment simply put as dog-fighting.
How do you feel about pit bulls now, angry about their treatment? I hope so, for they cant do it alone be their voice. You have heard stories, seen pictures of their love, and tasted how they feel. Now it is up to you, to go out and give them a chance at a much better life. Volunteer, raise awareness , and most importantly give them you full support and love. Check out the links below to find out how you can help. Farewell for now, my friends remember do what is right. 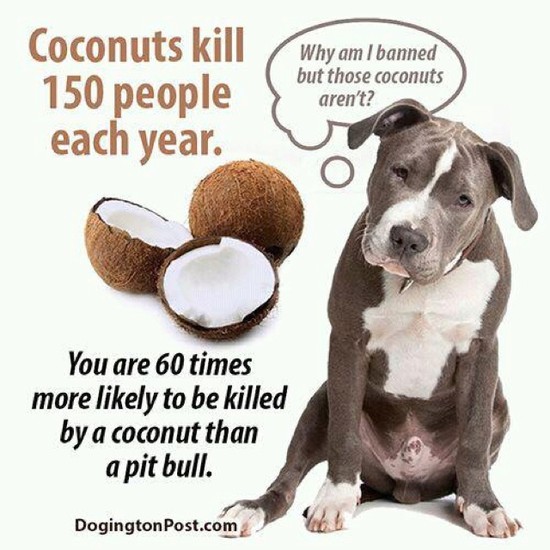 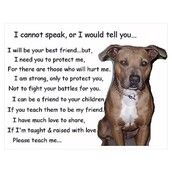 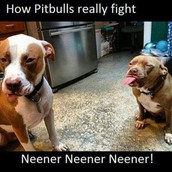