cade is using Smore newsletters to spread the word online.

Get email updates from cade:

The power of spies in the war

The power of spies in the war

There were no reliable spies in the Colonies until 1778 when Benjamin Tallmadge brought together trustworthy men and women in Long Island. The Culper Spy Ring became the most impactful spy ring on the war.

What Would Happen If Spies identity was revealed?

Spies identities were kept secret until the war was over for a reason. Spies were often killed when their identites were found. For example, Nathan Hale a inexperienced spy was hung because he told a undercover British solider his true identity.

Spies were ordinary people who blended in with society. 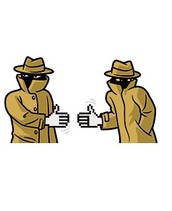 What's the Relationship between real spies and fictional spies?

When most people think of a spy they think of a man in black mask or in a trench coat with a gun sneaking around. This couldn't be farther from the truth spies are people who dress ordinary and try and fit in with society.

When one thing is written in one chemical it disappears and when another chemical is added the writing reappears.

British Spies like James Moody would try and steal mail directed towards George Washington. It seemed as if James Moody could steal Washington's mail easily. One time Moody almost stole secret documents intended to go to the Continental Congress. The one time when Moody was captured he escaped.

cade is using Smore newsletters to spread the word online.