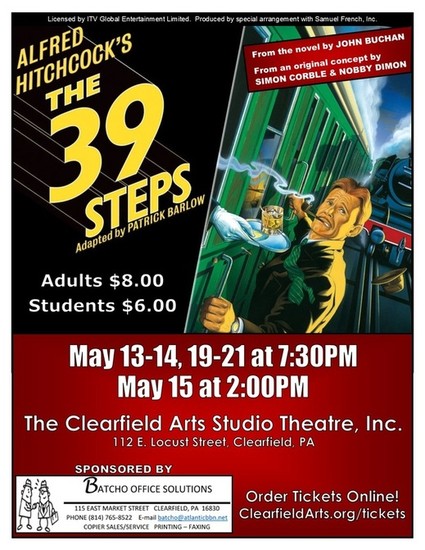 Tickets are now on sale for THE 39 STEPS! Click HERE.

Friday the 13th is the perfect day for a Hitchcock classic to open on the CAST stage!

Mix a Hitchcock masterpiece with a juicy spy novel, add a dash of Monty Python and you have The 39 Steps, a fast-paced whodunit for anyone who loves the magic of theatre. This 2-time Tony and Drama Desk Award-winning treat is packed with nonstop laughs, over 150 zany characters (played by a ridiculously talented cast of 4), an on-stage plane crash, handcuffs, missing fingers and some good old-fashioned romance!

In The 39 Steps, a man with a boring life meets a woman with a thick accent who says she's a spy. When he takes her home, she is murdered. Soon, a mysterious organization called "The 39 Steps" is hot on the man's trail in a nationwide manhunt that climaxes in a death-defying finale! A riotous blend of virtuoso performances and wildly inventive stagecraft, The 39 Steps amounts to an unforgettable evening of pure pleasure!

CAST’s production of The 39 Steps is directed by CAST Artistic Director, and Clearfield theater veteran, Gayle Gearhart. The cast is made up of talented local performers Shawn Inlow, Cody Buck, David Laubacker, Josh Aycock, and the voice of Dudley Shimmell. This is a performance you won’t want to miss!

This production runs May 13-14 and 19-21 at 7:30PM and May 15 at 2:00PM. Sunday’s matinee will feature sign language interpretation. Special seating is reserved for those who wish to take advantage of this opportunity.

Tickets are affordably priced at $6 for students and $8 for adults. Tickets can be purchased online HERE, at the CAST office on Mondays from 5:30-6:30, at The Liddle Gallery in Downtown Clearfield, or at the box office prior to each show. Volunteers at CAST recommend purchasing tickets prior to arrival, as tickets can sell out fast.

THE 39 STEPS
Adapted by Patrick Barlow
From the novel by John Buchan
From the movie of Alfred Hitchcock
Licensed by ITV Global Entertainment Limited
And an original concept by Simon Corble and Nobby Dimon
Produced by special arrangement with Samuel French, Inc. 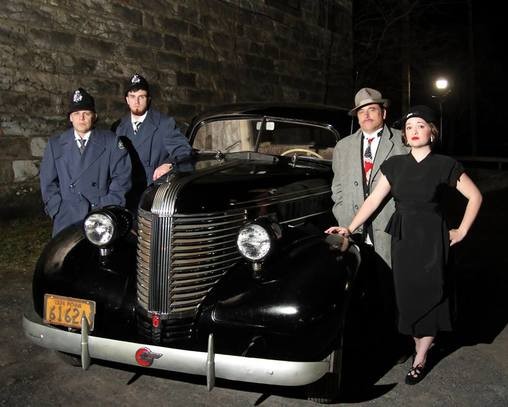 With the support of the Greater Clearfield Chamber of Commerce, there will be an "After Hours" event from 5PM to 7PM. During this time, refreshments will be provided, tours of the renovated building will be given, memories will be shared, and socialization is required!