Grenada (the first “a” is a long vowel) is the most southerly of the Windward Islands, about 100 mi (161 km) from the Venezuelan coast. It is a volcanic island traversed by a mountain range, the highest peak of which is Mount St. Catherine (2,756 ft; 840 m).

The Arawak Indians were the first to inhabit Grenada, but they were all eventually massacred by the Carib Indians. When Columbus arrived in 1498, he encountered the Caribs, who continued to rule over the island for another 150 years. The French gained control of the island in 1672 and held on to it until 1762, when the British invaded. Black slaves were granted freedom in 1833. After more than 200 years of British rule, most recently as part of the West Indies Associated States, Grenada became independent on Feb. 7, 1974, with Eric M. Gairy as prime minister.

In 1979, the Marxist New Jewel Movement staged a coup, and its leader, Maurice Bishop, became prime minister. Bishop, a protégé of Cuba's President Castro, was killed in a military coup on Oct. 19, 1983.

In an effort to establish order on the island and eliminate the Cuban military presence, U.S. president Ronald Reagan ordered an invasion of Grenada on Oct. 25, 1983, involving over 1,900 U.S. troops and a small military force from Barbados, Dominica, Jamaica, St. Lucia, and St. Vincent. The troops met strong resistance from Cuban military personnel on the island but soon occupied it. After a gradual withdrawal of peacekeeping forces, a centrist coalition led by Herbert A. Blaize won a parliamentary majority in 1984. The New National Party (NNP), led by Keith C. Mitchell, won a majority in the 1995 parliamentary elections. He won reelection again in 1999 and 2003.

In Sept. 2004, Grenada suffered the most damage of any country from Hurricane Ivan, which killed 39 and left thousands homeless. In July 2005, Hurricane Emily wreaked further destruction.

On July 8, 2008, the National Democratic Congress won 11 of 15 seats in parliamentary elections. Tillman Thomas was sworn in as prime minister on July 9. Sir Carlyle Glean was appointed Governor-General in November 2008.

Aqautic place of peace and swim

The War of grenada

The Invasion of Grenada, codenamed Operation Urgent Fury, was a 1983 United States-led invasion of Grenada, a Caribbean island nation with a population of about 91,000 located 100 miles (160 km) north of Venezuela, that resulted in a U.S. victory within a matter of weeks. Triggered by a bloody military coup which had ousted a four-year revolutionary government, the invasion resulted in a restoration of constitutional government. It was controversial due to charges of American imperialism, Cold War politics, the involvement of Cuba, the unstable state of the Grenadian government, the illegality under international law and Grenada's status as a Commonwealth realm. Media outside the U.S. covered the invasion in a negative outlook despite the OAS request for intervention (on the request of the U.S. government), Soviet and Cuban presence on the island and the holding of American medical students at the True Blue Medical Facility.

Grenada gained independence from the United Kingdom in 1974. The leftist New Jewel Movement seized power in a coup in 1979 suspending the constitution. After a 1983 internal power struggle ended with the deposition and murder of revolutionary Prime Minister Maurice Bishop, the invasion began on 25 October 1983, less than 48 hours after the bombing of the U.S. Marine barracks in Beirut.

The US Army's Rapid Deployment Force (1st, 2nd Ranger Battalions and 82d Airborne Division Paratroopers), Marines, Army Delta Force and Navy SEALS and other combined forces consisted of the 7,600 troops from the United States, Jamaica, and members of the Regional Security System (RSS)[3] defeated Grenadian resistance after a low-altitude airborne assault by the 75th Rangers on Point Salines Airport on the southern end of the island while a Marine helicopter and amphibious landing occurred on the northern end at Pearl's Airfield shortly afterward. The military government of Hudson Austin was deposed and replaced by a government appointed by Governor-General Paul Scoon until elections were held in 1984.

While the invasion enjoyed broad public support in the United States,[4] and received support from some sectors in Grenada from local groups who viewed the post-coup regime as illegitimate,[5] it was criticized by the United Kingdom, Canada and the United Nations General Assembly, which condemned it as "a flagrant violation of international law".[6]

The date of the invasion is now a national holiday in Grenada, called Thanksgiving Day, and the Point Salines International Airport was renamed in honour of Prime Minister Maurice Bishop.[7][8] The invasion highlighted issues with communication and coordination between the branches of the United States military, contributing to investigations and sweeping changes, in the form of the Goldwater–Nichols Act and other reorganizations.

In 1983 the United States invaded the island of Grenada and Overthrew the communist government in favor of a pro-Western one in a span of less than two months.

Problems between the US and the Caribbean nation began in 1979 (while the Cold War was still in effect) when a bloodless coup placed the pro-Marxist Maurice Bishop as the Prime Minister, which led to strengthened ties between Grenada and communist nations like Cuba and the Soviet Union.

Bishop was eventually murdered in October of 1983 during a power struggle with hard-liners in his own movement, creating a breakdown in civil order that threatened the lives of American medical students who were living on the island. In response, and at the request of allied Caribbean nations, the US launched "Operation Urgent Fury," sending the Marines to the north of the island and Army Rangers to the south.

During the fighting, the US suffered from lack of sufficient intelligence data, which made it difficult to find the medical students who needed to be rescued. The Grenadian Army and its Cuban allies also offered greater resistance than the Americans expected.

Despite the difficulties, the Americans were able to take the island by mid-December. An Interim Advisory Council was established and it governed Grenada until December 1984, when Herbert A. Blaize, the head of the New National Party, was made Prime Minister through parliamentary elections.

The Ranger Page - Gives an account of the conflict, focusing on the role of the U.S. Rangers. Operation

Urgent Fury - Learn about the events in Grenada that led up to the invasion by U.S. troops.

The History Guy - Provides an explanation of the causes of this conflict along with an overview of consequences and casualties.

Grenada, Operation Urgent Fury - The Naval Historical Center presents a summary along with a list of U.S. ships that were involved in this operation.

Jus ad Bellum and the 1983 Grenada Invasion - Find an overview of the conflict written by a student of the Canadian Forces College.

Back to Main History Page 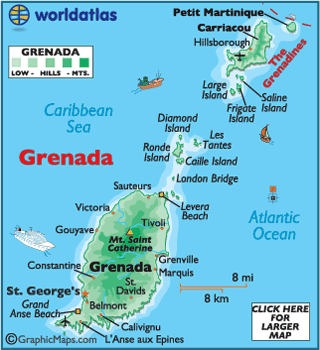 In 1985 the total population was estimated at 90,000, resulting in a population density of 300 people per square kilometer. Approximately 30 percent of the population lived in the capital city of St. George's; the balance was spread throughout the island in coastal towns and on inland farms. The population growth rate since 1970 has been near zero; some years have registered minor increases, whereas others have had offsetting decreases. In 1986 it was 0.3 percent. In spite of a relatively high crude birth rate, the population has remained relatively stable because of emigration.

Emigration was Grenada's most striking demographic feature in the late 1980s; the emigration pattern has been documented for nearly a hundred years. Throughout much of the nineteenth century, Grenada experienced a net migratory inflow to meet the shortage of labor. This trend was reversed, however, around 1890, when the labor market contracted. Shortly thereafter, Grenada experienced a net outflow of workers that eventually offset natural population growth. Grenada has long been considered overpopulated because of the economy's inability to absorb the growing labor force. This compelled many Grenadians to seek employment in foreign countries; most went to other islands in the Caribbean, Britain, the United States, and Canada.

In the late 1980s, the propensity for the work force to migrate was changing the structure of the population; emigration from Grenada not only neutralized the natural population growth rate but also skewed the age distribution. Because of the large numbers of working-age (fifteen to sixty-four) Grenadians continuing to leave the island, Grenada was slowly becoming a society with a disproportionate number of very young and very old inhabitants.

These demographic trends were well entrenched by 1987 and were expected to persist into the twenty-first century, having significant ramifications for the economy. A high crude birth rate was thought likely to continue to exacerbate the unemployment problem unless expanded economic performance created new jobs or unless an effective national birth control program was implemented. The failure of these to materialize would perpetuate the need for much of the work force to migrate for generations to come.

Grenada had essentially one ethnic group. Approximately 91 percent of the population was black, descended from the African slaves brought to Grenada by the French and British to work on colonial plantations. East Indians and whites constituted the remaining 9 percent of the population. Virtually all traces of the Carib and Arawak Indians, the original inhabitants, were gone. The island's ethnic homogeneity has often been cited as the reason for the general lack of racial discord in the society. Although factions developed for political and economic reasons, the absence of racial prejudice minimized the social upheaval evident in societies with more distinct ethnic barriers. Social, political, and economic stratification based on color and education had existed from colonial times through the twentieth century, however. White and light-colored inhabitants, composing an elite minority of no more than 5 percent of the population, had long controlled the political and economic resources of the country. Nevertheless, diversification of the economy and political transformations since the rise and fall of the PRG had softened these distinctions (see Government and Politics, this section).

Religious affiliation was the product of Grenada's colonial heritage. Approximately 65 percent of the population was Roman Catholic, a lingering effect of periodic French domination. The remaining 35 percent primarily belonged to three Protestant denominations: Anglican, Methodist, and Presbyterian. There was also a small Rastafarian se

Follow Ryan Beasley
Contact Ryan Beasley
Embed code is for website/blog and not email. To embed your newsletter in a Mass Notification System, click HERE to see how or reach out to support@smore.com
close