We apologize if you already received this email. There was a glitch in our communication system and we wanted to send it again to ensure everyone received it.
Haga clic aquí para leer el boletín en español

At the June Board meeting, District 15 recognized a number of Track and Field athletes. Winston Campus Junior High ranked overall as the 2nd best team in the state! The Winston Warriors also came home with three individual or team State Championship Titles:

Three District records were broken this year during the Track and Field season:

Congratulations to these extraordinary athletes on their amazing accomplishments! 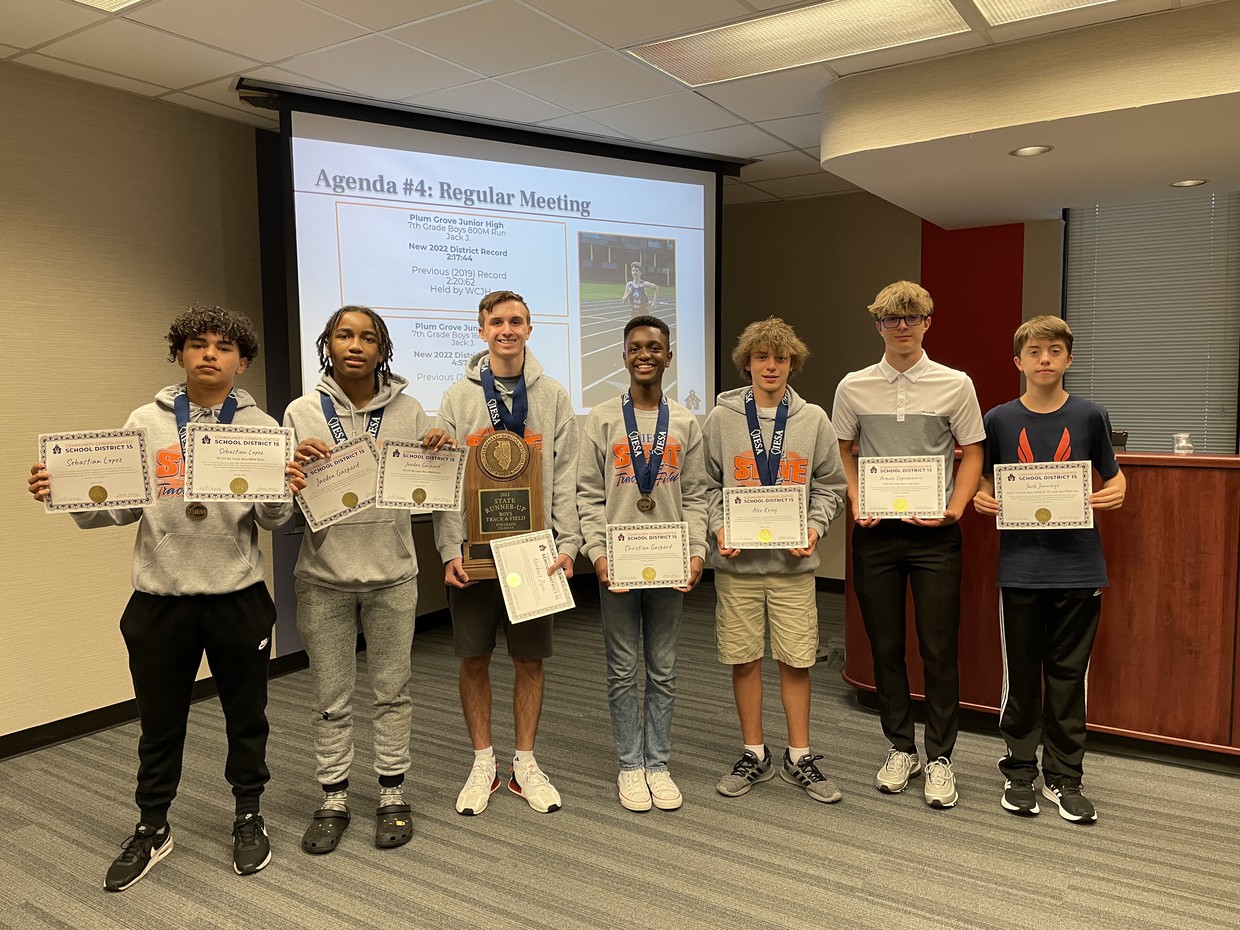 Jason Dietz, Principal of Walter R. Sundling Junior High School, was recognized by the Board of Education for being named as one of the newest Directors of the Association of Illinois Middle Grade Schools (AIMS). AIMS is committed to exemplary programs, practices, and policies that support professionals, families, and communities who educate adolescent students learning within a Middle School setting.

We are proud of Mr. Dietz and his dedication to continue to grow as an educator and serve in an additional leadership capacity to better the educational experience of adolescent students both at WRS and throughout Illinois. We look forward to hearing all he learns from this experience and thank him for the leadership role he will play in helping move our middle school initiative forward. 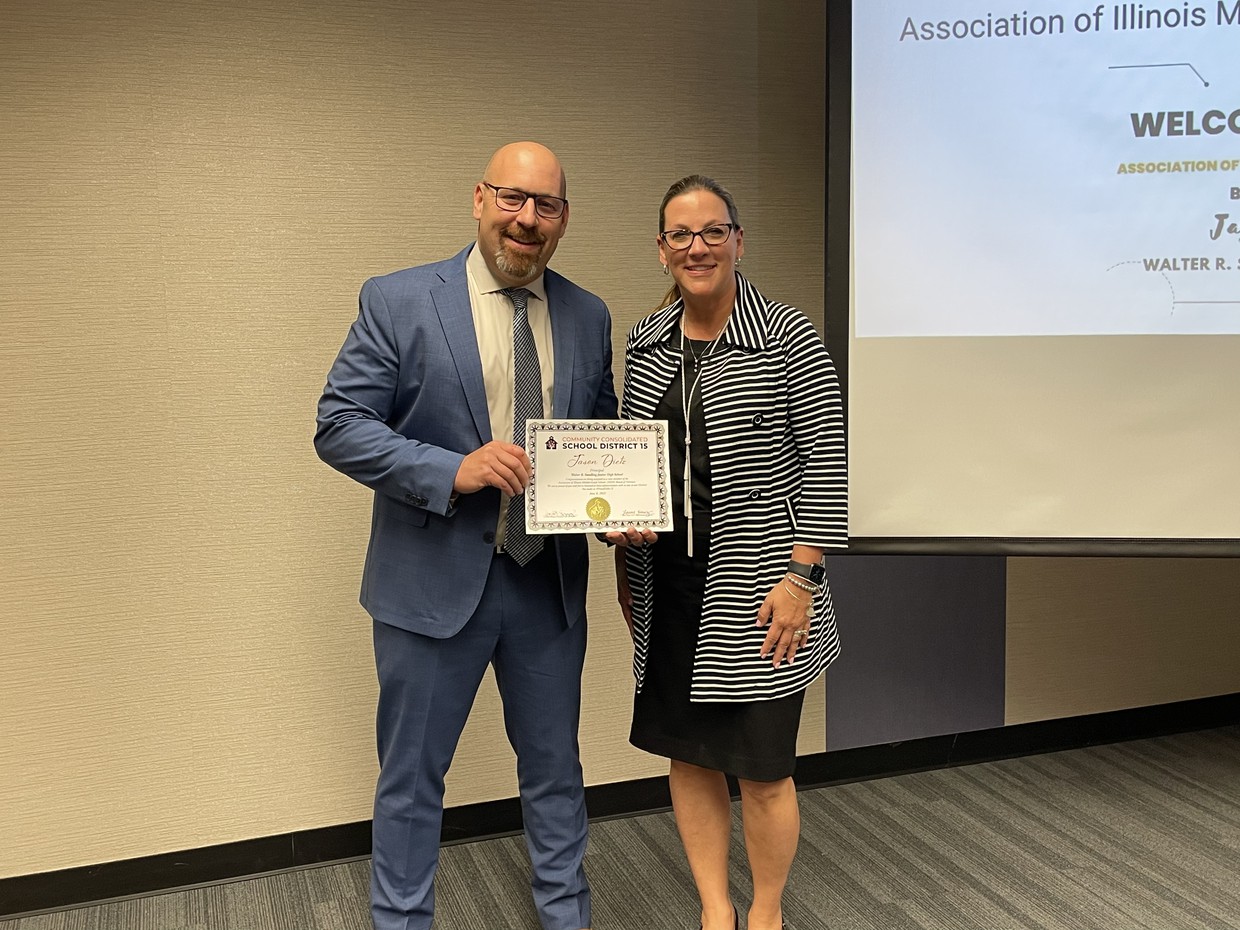 Results from the hybrid poll and mail survey conducted in May and the final report from the Citizen Task Force (CTF) meeting were shared. According to the hybrid poll, nearly 60% of voters are in favor of the ballot measure while 57% of the mail survey respondents support the proposal in its current form. The CTF reached unanimous consensus that the Superintendent should recommend the Board proceed with the proposed Moving 15 Forward plan and place a referendum question on the November 8, 2022, ballot.

Paul Hanley, Managing Director of Beyond Your Base, and Marcia Sutter, Minding Your Business, presented the public opinion research data to the Board. A public opinion questionnaire was mailed to 31,818 households within District 15 boundaries on May 3, 2022. The mailing included all registered voter households within the District and served as an invitation for public reaction to a possible bond referendum. The mail survey included a total of 18 questions, including one open-ended question. A total of 3,309 surveys were returned and processed as of June 1, 2022. This represents a response rate of approximately 10.4%, which for a district of our size, reflects a high response rate.

Questions asked respondents to rate priorities of the portions of the proposal as well as statements in favor of and against the proposal. According to survey results, 64% of respondents had a fairly strong awareness of the District’s funding proposal, having read, seen, or heard about the funding proposal and 65% were very or somewhat satisfied with the amount of information received. The mail survey indicates support for the proposed referendum in its current form, with a total of 57% in support, 35% against, and 7% undecided.

Key findings from the Public Opinion Strategies hybrid (phone and text) survey of 300 registered voters, conducted May 21-26, 2022 were aligned with the mail survey. According to the hybrid poll, nearly 60% of voters are in favor of the ballot measure. Results showed that about one-in-two voters believe District 15 schools are better than other schools in the state. Close to 60% of respondents are confident in the District’s ability to handle taxpayer money wisely. Respondents were asked to rate components of the plan; improving accessibility and security, replacing outdated roofing, plumbing, and mechanicals, and updating libraries were identified as top priorities.

Update from the Citizen Task Force

The Citizen Task Force (CTF), which met six times throughout the 2021-2022 school year, reconvened on June 6 to review the data that was presented at the Board of Education meeting and, based on findings, and made a recommendation to the Superintendent. The CTF reached unanimous consensus that the Superintendent should recommend that the Board proceed with the proposed Moving 15 Forward plan and place a referendum question on the November 8, 2022 ballot. The question will be similar to the funding proposal tested in the mail survey and hybrid poll this Spring.

*Please note the August Board meeting will be on a Thursday, not a Wednesday.

Portrait of a Graduate

District 15 partnered with Battelle for Kids to create a Portrait of a District 15 Graduate. Battelle is a non-profit organization committed to collaborating with school systems and communities to realize the power and promise of 21st-century learning for every student.

The Portrait of a Graduate design team consisted of many stakeholders from District 15 communities including parents, students, educators, communities of faith, community officials, two members of the Board of Education, and district office staff.

The first meeting engaged members to discuss landscape shifts and how the ever-changing world impacts the student learning experiences and skills. During the second meeting, the team reviewed competencies and prioritized the top six competencies of the group. The third meeting helped the group localize its competencies and the fourth meeting gave the group a hands-on opportunity to reach consensus on how best to activate its portrait. Below is the District’s latest draft of a Portrait of a District 15 Graduate. 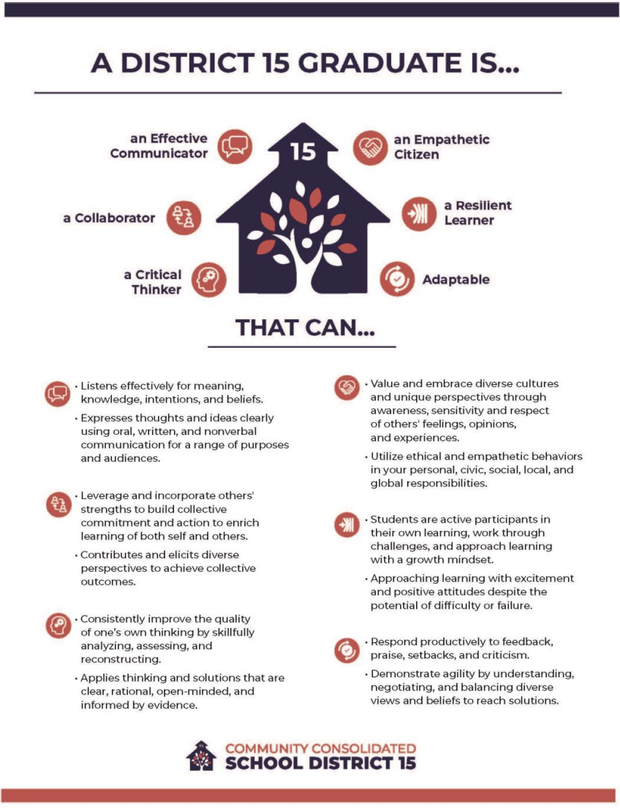 Presentation of the FY23 Tentative Budget

The business department met with the department leads to discuss their budgets for FY23. Each budget was adjusted based on need and historical spending. A zero-based budget was used for large spendings such as curriculum, technology, and software.

View the full presentation of the FY23 tentative budget here.

Diana McCluskey, Chief Business Official, proposed an increase in the hourly rate for the District’s summer workers to better align with other local businesses and increase our ability to attract summer help to meet our work demands.

Board Member Frank Annerino shared that the Illinois legislature is not currently in session and therefore, there was nothing new to report.

Board Member James Taylor shared the one-five had a successful Teacher Tribute campaign, selling 270 tributes this year. The one-five will have its annual meeting on August 10.

Board Members Wenda Hunt and Anthony Wang shared that the Finance Committee met last Thursday and discussed construction timelines, budgets linked to the Moving 15 Forward proposal, the latest version of the Master Facility Plan, and the FY23 tentative budget.

Board Members Samantha Ader and Zubair Khan shared about their participation in the Portrait of a Graduate Design Team. They were excited to share their perspectives on the process and how the portrait will help inform the District’s Strategic Plan to be written next year.

Board Meeting Videos, Minutes and Agendas 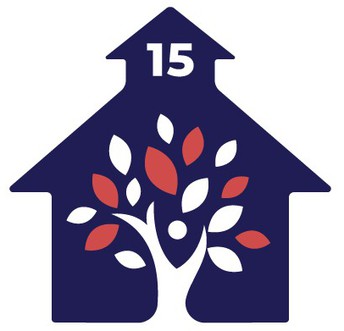 Facebook @D15Schools
580 North 1st Bank Drive, Palatine, IL, USA CCSD15@ccsd15.net 847-963-3000 ccsd15.net
Embed code is for website/blog and not email. To embed your newsletter in a Mass Notification System, click HERE to see how or reach out to support@smore.com
close