Your child's goal: Read as many pages as possible between now and October 22nd. Reading logs MUST be turned in to Ms. Knight no later than Wednesday, October 28th. We’ll have prizes for those who read the most in each grade level, and every participant will receive recognition!

Ms. Knight is looking for a few good students to be on this year's News Team! Auditions are open to any 4th or 5th grade student.

Interested students can pick up an application packet in the library. Applications MUST be turned in by Wednesday, September 2nd! Auditions will be held on September 3rd and 4th. The announcement of the 15-16 News Team will be at the end of school on Friday, September 4th.

An electronic copy of the application packet is also available here and on the library blog. 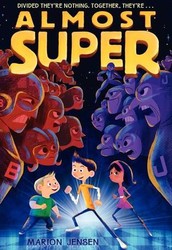 Book of the Week: Almost Super

“At 4:23 in the afternoon, on February 29, any Bailey age twelve or over gets a superpower.”

This year, brothers Rafter and Benny Bailey will finally get the superpowers they’ve been waiting for. Will they be able to fly? Have super strength or speed? Shoot fire or water out of their hands? What powers will they get to aid in their family’s fight against the Johnsons, the evil family of supervillains?

When the clock strikes 4:23, Rafter and Benny finally get their long-awaited powers…and they’re total duds. No, they couldn’t get useful powers like flight, strength, speed, or even super-smarts. Nothing useful like that. No, Rafter now has the astounding ability to light matches on polyester, and Benny can turn his belly button from an innie to an outie. It doesn’t look like these two boys will be much help when it comes to fighting crime.

Rafter is shocked by how worthless his new power is. Why did he and Benny get such dumb powers? How can they possibly help the family fight evil with powers like these? Rafter becomes determined to find out just what is going on, and his quest leads him right to one person–Juanita Johnson. (Yes, of the evil supervillain Johnsons.) Did she get a worthless power, too? Or did this embarrassment somehow skip the Johnsons?

As Rafter and Benny learn more from Juanita, they begin to realize that maybe the two families–who’ve been fighting for decades–aren’t all that different. Maybe they both see themselves as superheroes. And maybe there’s an even bigger problem that they need to work together to solve.

Join Rafter, Benny, and Juanita in Almost Super as they uncover a plot to manipulate both of their families and learn that one doesn’t need superpowers to do something truly heroic. Sometimes, being almost super is enough.

Almost Super is a nominee for the 2015-16 South Carolina Children's Book Award.

All students in grades 2-5 will take MAP testing in September for Reading and Math. Classroom teachers will let you know specific dates for their class. Please be sure that your child is at school and gets a good night’s sleep. Encourage your child to do his/her best.

Parent Portal access is now available to be picked up in the office. An informational sheet about the portal can be found in this week’s folders.