Weapons and Vehicles Used in WWI

Weapons and Vehicles Used in WWI

Used as a physiological weapon but also used in close combat. The bayonet was stuck onto the end of a gun. IT was used as a long knife just to stab people in the the chest or back.

The basic idea of a flamethrower is to spread fire by launching fuel. The earliest flamethrower dated back to 5th century B.C. It is known for trowing out sheets of flame to the British in 1915. 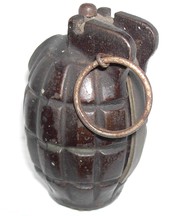 Grenades were one of many inventions during the WWI time period. Germany was the first army to get the hand grenades as 70,000 we given to them. Soon all army's had their hands on hand grenades. There were two ways to set off the grenade. You could either hand throw it or shoot it out of a rifle.

Machine guns were usually operated on a flat tripod or mounts. They usually took a crew of 4 to 6 men to operate. You could fire around 400-600 small-caliber bullets a minute. The rounds fired out of the gun before they were fired were held in small metal strips 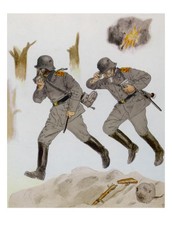 Poison gas was first used by the French and popularized by the Germans. The French first used it against the Germans and that is when it got popular when Germans started studying the gas.

This type of tank was created by the United States.It was produced in 1918. The tank weighed 18,000 pounds and was 25 feet long. It only needed 2 crew members to work.

The steam tank was also built by the United States. it weighed 50.8 tons and was 10.6 meters long. It required 8 crew members to control this tank. It ad an attached flamethrower and had four .30 cal. machine guns.

This was the third tank created by the United States. It weighed in at 25.4 tons and was only 5.03 meters long. It was designed to have 6 crew members working the tank. This tank was built between 1917-1918.

This armored car was created by the Germans. It was not the greatest armored car but it would do for the Germans as it only weighed 11 tons which made it slower. It only went about 10-11 miles per hour. It was also very limited to off-road driving.