Aminah is using Smore newsletters to spread the word online.

Get email updates from Aminah:

What is an Earthquake?

Earthquakes are one form of natural disasters that can happen on planet Earth. Like the name suggests, earthquakes are when there is a sudden shaking of the ground. Every year, there are millions of earthquakes, but most of them are undetected. However, earthquakes can be very deadly. Many deadly earthquakes have occurred in the past, resulting in a lot of deaths and a lot of damages. Find out more information about earthquakes and learn some fun facts in this special Earthquake edition of The Daily Earth. 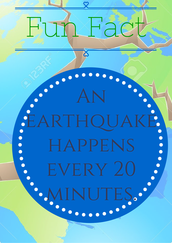 How Do Earthquakes Happen?

On Earth's surface, there are about twenty tectonic plates that are always moving slowly past each other. Sometimes, these plates squeeze or stretch, which causes huge rocks to form at their edge. The rocks do not move and instead, push against each other. After a while, the rocks break because of all the pressure. When the rocks break, the earthquake happens.

How are Earthquakes Measured? 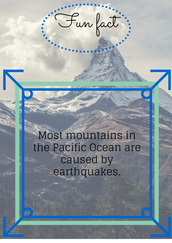 Surrounding the Pacific Ocean is a 25,000 mile zone known as the "Ring of Fire". The Ring of Fire is made up of mountains, volcanoes, and ocean trenches that starts at New Zealand and passes through east Asia, the Aleutian islands in Alaska and stops at the western coasts of North and South America. This horse-shaped area has very high levels of earthquake activity, and is called the "Ring of Fire" because of the 452 active and dormant volcanoes that are in this area. About 90 % of the world's earthquakes are in the Ring of Fire, and it causes almost 50,000 earthquakes a year. 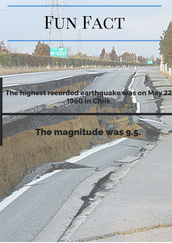 Ways You Can Be Prepared and Prevent Damage from Earthquakes

Although you can't prevent earthquakes from happening, there are many ways you can be prepared so that you are safe if an earthquake does hit you. One way you can be prepared for earthquakes is to have an emergency plan set in place for you and your family. You should have a safe place in your house to go to that does not have any fragile objects or anything that can fall and hurt you. Another way to be prepared is to have a first aid kit handy, in case you or someone in your family gets injured. You should also have canned food and water ready. Some new buildings are earthquake proof, because they have a strong structure to keep the foundation sturdy. If you own a home, you should bolt or place sandbags around your house, so that it can withstand the force of an earthquake. 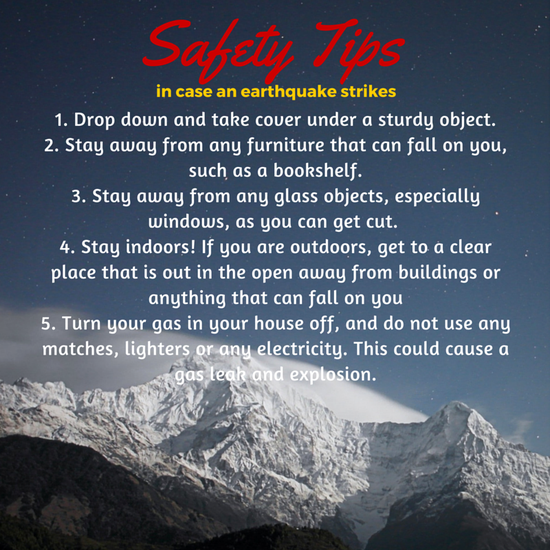 Aminah is using Smore newsletters to spread the word online.