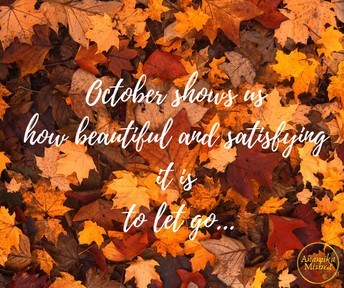 This is the last month for tours at the historic Meadow Croft estate. We are proud of all of the work we managed to accomplish this season. Come check out the new additions like the historic lighting features, servants quarters, and the auto barn (more info on this below).

John Ellis Roosevelt was a car enthusiast. The automobile was first invented and perfected in Germany and France in the late 1800s, though Americans quickly came to dominate the automotive industry in the first half of the twentieth century. Mr. Roosevelt quickly acquired an auto and built the auto barn on the property of Meadow Croft to accommodate his new purchase. According to Mr. Roosevelt's obituary, he owned one of the first automobiles in NY.

The auto barn was constructed in 1903. It was built in 3 sections and the final section was built in 1905. Mr. Roosevelt also had a chauffeur to drive him to important business meetings and such. There is a trench on the floor, pitched into the cement, that was used for oil changes. The oil was drained and flowed directly into Brown's River.

Recently, the BBPHA has restored the auto barn to accurately reflect the turn of the century. It also houses Gene Horton's 1916 Maxwell that has been donated to the Association by a generous member of Gene's family. The Maxwell is just an example of a car of that time period and was not owned by the Roosevelt family. Photographs of Mr. Roosevelt racing his cars along with other artifacts can be found upstairs in Meadow Croft, located in Mr. Roosevelt's dressing room. Dusters, coats that helped keep the dust off of clothing while riding in open cars, can be found there as well.

Special thanks to Eric Haesche and Jerry McCloskey for their work on the auto barn this month and creating another excellent visual exhibit at Meadow Croft. 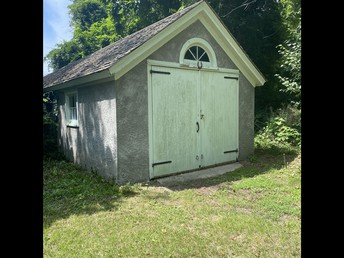 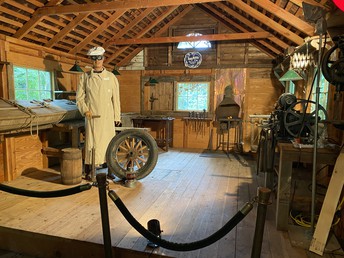 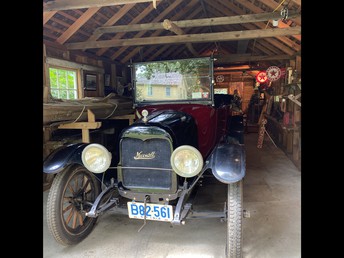 Thank you to the Yaphank Historical Society who recently came to Meadow Croft to see the authentic period lighting that has been installed throughout the estate. Meadow Croft also has a grand display of additional lighting fixtures that highlights the transition from kerosene and gas to electric in the early 19th century. Special thanks to Erich Haesche, an expert of historical lighting, that helped guide the BBPHA in purchasing authentic pieces to enhance and restore Meadow Croft to its original glory.

Erich will be available on the first weekend of October to answer any questions guests may have as tours are open every weekend through the month of October. Thank you to the Yaphank Historical Society for stopping by and we hope you enjoyed your tour! 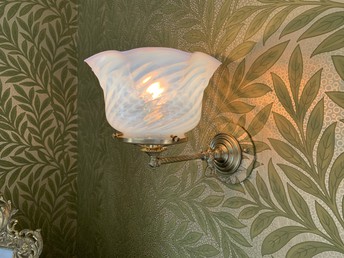 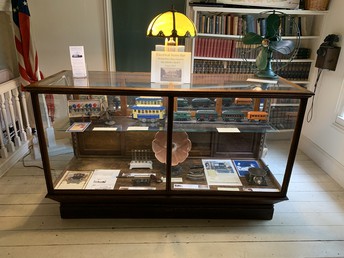 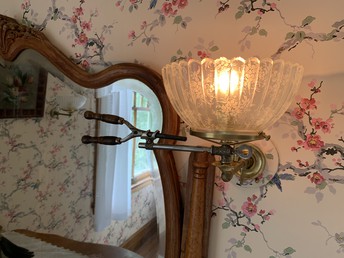 A generous donation to the BBPHA has been made in the names of Gary Loker, former husband of docent Linda Loker, and Dennis Elliot. Thank you to the generous donors in memory of these two community members. 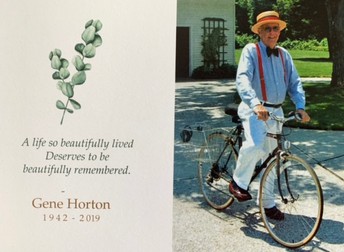 On September 5, family and friends gathered at Meadow Croft to celebrate the life of our wonderful Blue Point historian, Gene Horton. Gene’s husband Erich did a magnificent job setting up the event. Gene’s books, a photo album, and his boater, the hat he always wore when giving tours of Meadow Croft, were on display. Of course, Erich had Blue Point’s own Flo’s cater the party (would Gene have wanted it any other way?!). It was a wonderful day to celebrate a great historian and an even better man.

At the end of his book, Blue Point Remembered, Gene wrote, “To preserve our past is to enrich our future.” Family, friends, former students, neighbors, and our community are all the more rich for having had Gene Horton in our lives. Thank you, Gene. 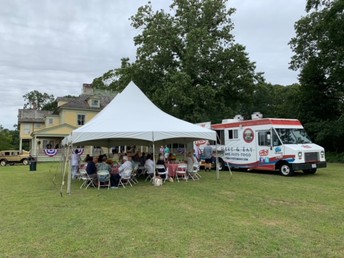 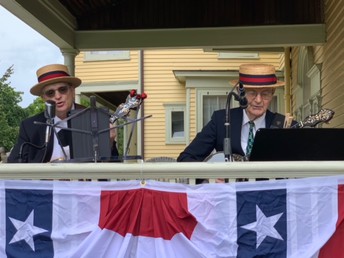 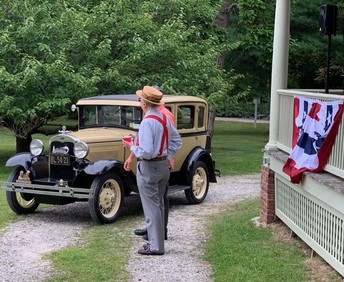 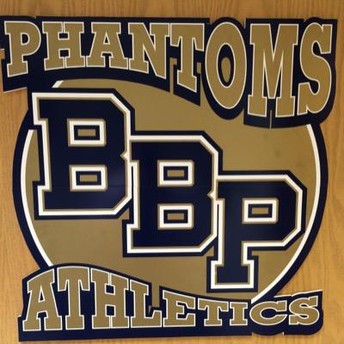 These articles were first printed in the Bayport Blue Point Gazette and written by Gene Horton. They are reprinted with permission.

Our High School has a very interesting name for its athletic teams: The Bayport-Blue Point Phantoms. The dictionary defines a "phantom" as an "apparition, a specter, an illusion, ghost-like, a dream image.'" With Halloween this month, ghosts and phantoms fit right in.

The Bayport-Blue Point Library has a collection of our high school's "Stepping Stone" yearbooks. So, I began to leaf through them in chronological order, especially the "Athletics" section, looking for the key team word, "Phantoms." Originally, the teams were just know as "Bayport HIgh School" team before consolidation with Blue Point. The 1953 Bayport HIgh School 'Stepping Stone' yearbook is the first yearbook to use the team word "phantom." And it wasn't until 1970 that the word, "PHANTOM" appeared on the shirts of the varsity basketball team yearbook photo.

In February 18th 1999 issue of the 'Suffolk County NEWS,' Marie Weiss wrote an article about how the Bayport-Blue Point teams got their name "Phantom:"

Bayport-Blue Point's team name has a most interesting history. According to Cara DeSimone, reference librarian at the village's public library, there used to be a ghost in the high school tower. "It was said that the tower was haunted," she noted.

My interest peaked. I followed a trail that included talking with Charlie Bogel, his daughter, Barbara Ackermann, Florence Olsen and Dave Brewer. Those discussions led to another theory which was presented by Don Porter. He contacted Tim Mazzei and they determined that the name originated in the late 1930's when the second team (junior varsity) did better than the first team (varsity). Someone made the comment "Where did these kids come from?' and the reply came back, 'Are they a bunch of phantoms?'

Mr. Porter noted that the name Phantoms was not allowed to be used at the time. They were to be called the Bayport High School Basketball Team. Any more theories/stories about how the PHANTOMS got their name??? Let us know.... 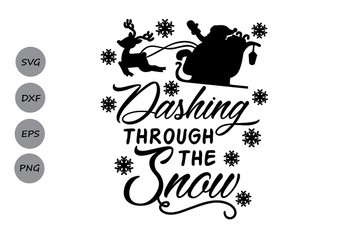 Christmas at Meadow Croft: This year, Christmas at Meadow Croft will be on December 4th and 5th 2021. The theme is Dashing through the Snow and Leanne Berg, our event chair is asking for help with this year's display. We had a wonderful group who came into MC to help decorate however, The Neighbors and Gardeners of Bayport Blue Point unfortunately disbanded this year and we are looking for another group, business or community organization who would be willing to volunteer their time and materials to help with this request. If you are interested you can reach out to Leanne at 631-235-1702.

Historic Autumn House Tour: Unfortunately this year, we were not able to properly plan for the Autumn House Tour due to restrictions and guidelines as a result of the pandemic. We are beginning our planning NOW for 2022. If you have a historic, unusual or architecturally significant home in the Bayport Blue Point community and would consider allowing us to showcase your home in October of 2022, please give us a call. This has always been a great event for our organizations as well as the community and we would like to bring it back but WE NEED YOUR HELP! If you have any questions or would like more information, please call us at 631-472-4625. 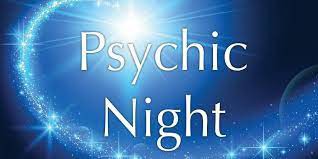 Psychic night is back!

On October 25th at the Meadow Croft estate, the BBPHA will host a Psychic Night! We organized this a few years ago and it was a fun, well attended event. As details are being finalized now, please follow our Facebook page to get the latest information about times and pricing.

*Please note: all the latest guidelines from the CDC and DOH will be followed for this event.

Prior to the start of the pandemic, we were undertaking a project to digitize some of our archived materials such as historical documents and photos. Obviously, things slowed down significantly in 2020, but recently we have recharged the project. Digitizing is a process of scanning documents and photos, saving them in a online format and them placing them on the web for the community to view and enjoy.

In a partnership with L.I. University under a Robert Lion Gardiner grant, the BBPHA has submitted all of our newsletters dating back to the first one in 1983. These documents provide a look back in time and details the hard work that the founding members undertook to make the association what it is today. The next item to be digitized and made available is the diary of Libby Homan. Libby Homan lived at Eureka House with her family located on the northeast corner of Oakwood and Middle Roads. As a young adult, LIbby recorded each day's events from 1867 to 1875. This diary is one of our treasured archives. The original, hand-written diary is in our possession given to the Association by a descendent of Ms. Homan. It was painstakingly transcribed into typed text for easy reading. Gene Horton did an investigative read of the text 20 years ago and commented that it is an excellent look back into the real-life events of the day.

The items are not quite ready for viewing. When they are, all members will be notified with the specifics on how to access these items from the web. We are excited to bring these historical documents to the community. 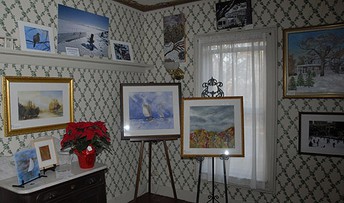 On Saturday, October 16, 2021, from 10am–4pm, The Islip Arts Council will hold an Art Exhibition at the historic Meadow Croft Estate. All of the art work will reflect the theme of the Roosevelt Estate and the grounds surrounding it. The art displays will be both inside and outside (weather permitting) so we hope you can join us for this special event. Everyone is Invited to attend! A video tour of the exhibition will be available online after the event at the Islip Arts Live Youtube Channel. 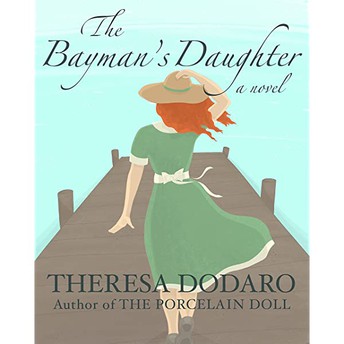 On Saturday, October 30th at 2:00 on the front porch of Meadow Croft, the Bayport Blue Point Heritage Association in conjunction with the Sayville Historical Society will host a book reading. Excerpts from The Bayman's Daughter written by Sayville author Theresa Dodaro will be shared.

The Bayman's Daughter is a time-slip novel that takes place in the quaint seaside hamlet of Sayville, Long Island which was once the playground of rich and famous families like the Roosevelts and Vanderbilts. Parts of the novel are set at Meadow Croft, home of John Ellis Roosevelt.

James Bertsch will host the event and it is open to the public. The author will be there as well and there will be a question and answer session with Ms. Dodaro. This event is rain or shine. Hope you can join us for this fun event! 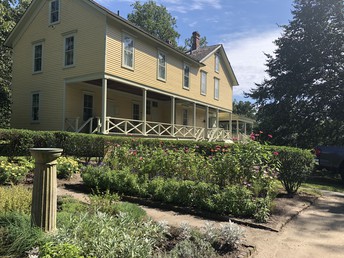 Facebook @BayportHistory
Last month for tours! Follow us on Social Media!
Meadow Croft Estate, Middle Road, Sayville, NY, USA bbphistorical@gmail.com 631-472-4625 BayportBluePointHeritage.org
Embed code is for website/blog and not email. To embed your newsletter in a Mass Notification System, click HERE to see how or reach out to support@smore.com
close