Get email updates from Ta-Da:

What we absorb from it.

What we absorb from it.

The Basics Of Motion

The act, process, or state of changing place or position; movement; the passing of a body from one place or position to another, whether voluntary or involuntary; -- opposed to rest. Power of, or capacity for, motion.

Which of these are considered to be motion? (Poll)

Which of these are considered to be motion?

Motion isn't just basic movement. You have to deal with speed, velocity, acceleration, distance, speed,displacement, average velocity,and instantaneous velocity. Sure these things may sound the same but they are all different. Not just their definitions either;they each have their own calculations.

An object is in motion when it is continuously changing its position relative to a reference point and is observed by a person or detection device. For example, you can see that an automobile is moving with respect to the ground.

The displacement of an object is how far out of place an object is; better known as the object's overall change in position. 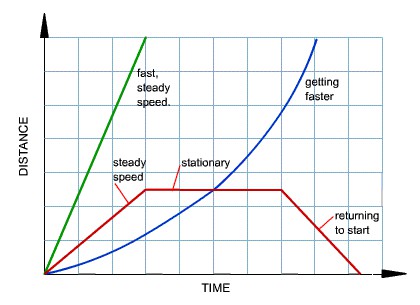 Difference between instantaneous and average velocity,speed, and acceleration.

This is a link to our poll with a question relating to motion.

What is considered to be Newton's first Law of Motion? The law of...

The relationship between an objects mass (m), its acceleration (a) and the applied force (F) is F=ma. Acceleration and force are vectors; in this law the direction of the force vector is the same as the one direction of the acceleration vector. According to Newton, an object maintains a certain velocity unless an object acts on it to change its acceleration(thus a change in the velocity). Acceleration= Mass/Force. So basically if a truck hits a car the car moves forward. The truck provides the force, the car is the mass, and the acceleration is how fast the car is moving forward. The lighter the car the farther and faster it will move.

For every action there is an equal and opposite reaction. For example, if as you step out of a boat onto the bank; as we move in the direction of the shore, the boat tends to move in the opposite direction. Which if you're not careful could cause you to faceplant!

Your opinion on Newton?

Which one of Newton's Laws have you heard of the most before this presentation?

www.polleverywhere.com
This is a link to a page on ck12.org that also contains a short instructional video.

www.ck12.org
Students will learn the meaning of speed, velocity and average velocity.
This is a short voki about the general idea of motion.

Animoto Video Over Motion and Movement

Never confuse motion with action.
Benjamin Franklin
I were better to be eaten to death with a rust than to be scoured to nothing with perpetual motion.
William Shakespeare

Follow Ta-Da Sparkles
Contact Ta-Da Sparkles
Embed code is for website/blog and not email. To embed your newsletter in a Mass Notification System, click HERE to see how or reach out to support@smore.com
close