The steamboat helped to expand the American economy and played a major part in the start of the industrial revolution. The steamboat could carry large amounts of cargo and passengers but were costly and unsafe at first. However, their long range helped with the expansion of the US.

The first successful trial of an American steamboat was on August 22, 1787. It was a 45 foot boat and was first tested on the Deleware River by John Fitch. Since paddles, and later the screws, used for propulsion created a lot of stress on the ship, and iron was becoming cheaper and more available, more and more iron ships were replacing the old wooden ships. This also helped the U.S. economy to grow.

Later, the steamships began traveling out west, Central, and through South America. This also helped the U.S. economy. When enough steamships were built, a regular passenger service was established to replace the overcrowded, sporadic passenger runs. Occasionaly, slaves would stow away on ships or the Captain my assist in transporting slaves.

Liberty Ships were steamships manufactured during WWII. They were design as steam powered ships to make them inexpensive in terms of supplies and money. Also, being steamships, they were easy to make and could be produced at factories less important to the war effort.

Another angle of a Liberty Ship.

Types of steamboats like this would be used on rivers.

This type of steamboat would be used to cross oceans. The sails provided emergency and auxiliary power. 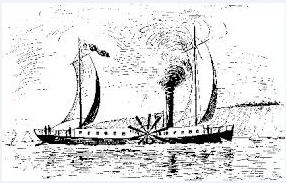