The Fall Of Rome

The Fall Of Rome

Why Did Rome Fall?

Rome chose their emperors in a manner that was not effective at all. They did not even have a set system to chose the next emperor. Initially, it was up to the old emperor, the senate, the emperors private army, and the army. Later, they developed a time when the emperor was just sold to the highest bidder. This lead to having many weak leaders that were definitely not fit to be emperor of such a huge area like Rome. Many attempted to take over and it led to many civil wars. In 100 years, Rome had 37 emperors and 25 of those had been assassinated. This is so many emperors in such little time. Some rulers like Gordian I and Gordian II only ruled for 21 days. Other rulers were lucky to be emperor for just a year. Usually, Emperors ruled for decades, like Augustus who ruled for 40 years and 7 months. Having so much change in the politics was very bad for Rome. Most of the Emperors wanted different things and Rome’s governments and politics were being changed a lot. The military basically ran the empire and gained all authority. Military people had no loyalty to Rome whatsoever and they too did not know how to run such a big area like Rome in a successful manner.

One example of someone who was not fit to run Rome was an emperor named Caligula. At first, Caligula was a great leader. When he became emperor, he promised many things. But, after surviving a life-threatening illness, he took back all of those promises and became power-crazed. He blew all of Rome's money when throwing parties. He spent all of what took the previous Emperor 22 years to collect in a matter of months. Therefore, he taxed everyone a lot more. He thought of himself as a god and killed anyone who he felt was going to surpass him. Caligula also had 2 empires built for him. Many people thought of Caligula as insane. He attempted to put his horse on Consul. He also brought him to dinner and some tell that he tried to marry the horse. One time at a circus, Caligula ran out of criminals to kill so he took hundreds of people from the stands and had lions attack them for his own amusement. He thought of many new torture methods and punished anyone severely who said anything bad about him. He married many girls and some were divorced in just days after marriage. People did not like that he stated that he was a god and that lead to his assassination in 40 AD. He was one of the first signs of the collapse of Rome. It was also very hard for Rome to pick up the pieces after this. He had spent all of their money and everything that they had worked for.

Was a great example of a horrible Emperor

Rome's Military ran the empire and had no loyalty for Rome

Is America Heading Down the Same Road?

America is not going to be heading down the same road as Rome did and end up collapsing. Unlike Rome, America has a very solid system when choosing a president or ruler. The citizens get to vote and know what kind of person is going to be running to become their leader. Most adults over 18 can vote and when they do, people count up the votes and the majority wins. Every four years, a new president is chosen and they may be re-elected once. Everyone has a voice in their opinion for which president they want to rule them. If the president dies, there is a very long list for who would take over the term. For example, if the president dies, the vice president. If something happens to them, the speaker of the house will take over. This system goes on and on until the 16th person down on the list is killed and a new president is elected so that there is a solid plan if something terrible happens. Every person running for president most likely has a long background in politics and knows how to handle political problems and is an expert in that field. Someone running for president knows how strong they need to be when president and how much time and effort it takes. Rome also had many civil wars which made Rome, overall, very weak. America has only had one civil war and that was more than 100 years ago. Most people America doesn't want to relive the civil war and it is so unlikely that something like that will happen. The military is loyal to the country and to the citizens. The people in the military are there voluntarily and were not forced by the government so you know that they are dedicating their time to help America achieve greatness. Citizens also are very involved and politics are important to them. One important thing is that we do not sell our politics to the highest bidder and if someone tries to do that, they are punished. An example of this is Rod Blagojevich who was was the Illinois Governor.

Rod Blagojevich was the governor in 2002 for Illinois and also was re-elected in 2006. Rod was voted the least popular governor in the entire nation. Rod only had a 13% approval rate. He attempted to trade Barack Obama's senatorial seat for money, campaign contributions, and a very high-paying job for his wife. He also threatened people who criticized him and fired them from jobs. Soon he was caught and sent to jail for corruption. Rod was found guilty of 17 of the 20 charges and has a 14 jail sentence. This is very unlikely to happen again and whoever does this, has many consequences. 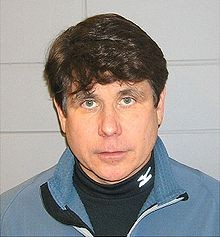 Follow Samantha Wieland
Contact Samantha Wieland
Embed code is for website/blog and not email. To embed your newsletter in your email, click HERE to see how or reach out to support@smore.com