Get email updates from Derek:

The Hero of the Century

This man is a man who started what Martin Luther King Jr. finished. This man is Jackie Robinson, a past baseball player who changed the name of baseball forever. He showed everyone that blacks deserve to have the same respect as whites do, and they deserve as much chances too. Jackie was the man who started the debate on racism, the link to Martin Luther King's dream, the reason why racism was stopped in the 1960's.

When Jackie Robinson became a member of the Brooklyn Dodgers, he was called many racist names, some people told him that he would never make it to the big time. Despite all the insult and the racism from coaches, fans, other teams, and even his own teammates, Jackie always played hard, got the Dodgers into the national league so many times, and got the respect he finally deserved. Jackie also made it possible for other blacks to join baseball in all white teams. 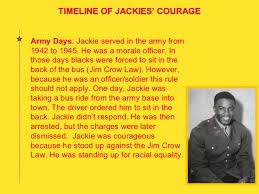 When Jackie Robinson was arrested, the military bailed him out due to the unfairness of the reason. Jackie was sitting in a military bus, he was fine until the driver demanded he give up his seat for a white person who wanted the seat. Instead of moving, or fighting back, Jackie just sat there as if he had ignored the bus driver. He was soon arrested for disrespecting the law, and disrespecting the person he had to move for, even though the rule did not apply to military Officers/Soldiers.

So many black kids on their way to and from school are being shot in the head for no reason by white police officers. There are even some colleges that have trouble with racism, especially when a kid who is not from America try to join a college sport team. But the worst racism is in the military. So many blacks, Hispanics, and even some whites that are no from America are having to deal with racism while fighting for America. They are having to suffer racial discrimination in their current unit.

So basically, here are three solutions: