Gerald is using Smore newsletters to spread the word online.

Get email updates from Gerald:

Thanks to all those who helped plan, organize, and staff the ministry fair! A great success! 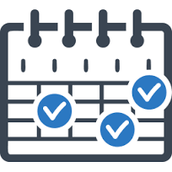 Christmas music rehearsal schedules are now available. You will find one attached in this email. I will also have some available. See me if you can't print the one attached. Thanks!

WACC/WAVE, we will combine and sing a salute to the armed forces on Sunday, November 8th. We will learn the music starting on this coming Sunday, October 11th. We will wear red, white, and blue on the 8th. Below is a link of the song so you can listen to/practice.

Salute to the Armed Forces

(New requests are in bold)

Tom Hovies has a new job! Safe week of travel!

Wes and Judi Brown got married!

Featured Song of the Month

4 As a prisoner for the Lord, then, I urge you to live a life worthy of the callingyou have received. 2 Be completely humble and gentle; be patient, bearing with one another in love. 3 Make every effort to keep the unity of the Spirit through the bond of peace. 4 There is one body and one Spirit, just as you were called to one hope when you were called; 5 one Lord, one faith, one baptism; 6 one God and Father of all, who is over all and through all and in all. Ephesians 4:1-6

SPONSORSHIP WORLD VISION CHILD
It's time for the our monthly sponsorship. Sponsorship is only $35 a month for a year. Please give the money to Jodie White each month.We are thankful for the opportunity to reach out and help a child in need. Thank you for your continued support!

Our purpose as members of the LCPC Worship Arts Team is to collaborate with the pastor and all the ministries of the Church in an effort: To lead the people of God in proclaiming the precious Word and saving Power of our Father through heartfelt music and worship.

Gerald is using Smore newsletters to spread the word online.