What is an island?

Islands are a home to some rich plant life and to animals some plants and also animals that are living on continental islands can be like those that can be living on mainland. Some animals that live on an island is mice, rabbits, frogs, and snakes are common. Craps, shrimp, and also jellyfish are too. Fish, gold, forests, nickel, lead, and so much more.

Did you know that bald eagles, and sharks can be found on the Galapagos Island. Some other animals are snakes, mice, jellyfish, colorful fish,Crabs, shrimp and so much more.

The worlds biggest island is Greenland. One island witch is the Hawaii island is made from a volcano. Canada's fifth most largest island is the Baffin island. There is a volcano it is called the Kilauea it has been erupting ever since 1983 and it just cut off a road to a town called Kalapuna it is on the biggest Island.

This is a map of a British Virgin Island. 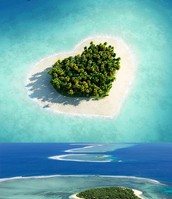 A photo of a heart island.

This is a photo of a Island birds eye view.