Lydia is using Smore newsletters to spread the word online.

Get email updates from Lydia:

- Women are much more likely than men to develop an eating disorder. Only an estimated 5 to 15 percent of people with anorexia or bulimia are male.14
- An estimated 0.5 to 3.7 percent of women suffer from anorexia nervosa in their lifetime.14

- Research suggests that about 1 percent of female adolescents have anorexia.15
- An estimated 1.1 to 4.2 percent of women have bulimia nervosa in their lifetime.14
- An estimated 2 to 5 percent of Americans experience binge-eating disorder in a 6-month period.14
- About 50 percent of people who have had anorexia develop bulimia or bulimic patterns.15 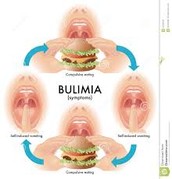 This is the cycle for someone with Bulimia. They binge eat which is often followed by purging.

Anorexia is a abnormally low body weight where people will compulsively exercise for several hours at a time, multiple times a day.

- 91% of women surveyed on a college campus had attempted to control their weight through dieting. 22% dieted “often” or “always.”5
- 86% report onset of eating disorder by age 20; 43% report onset between ages of 16 and 20.6
- Anorexia is the third most common chronic illness among adolescents.7
- 95% of those who have eating disorders are between the ages of 12 and 25.8
- 25% of college-aged women engage in bingeing and purging as a weight-management technique.3
- The mortality rate associated with anorexia nervosa is 12 times higher than the death rate associated with all causes of death for females 15-24 years old.4

Lydia is using Smore newsletters to spread the word online.