teri is using Smore newsletters to spread the word online.

Get email updates from teri:

-Heat Storage ; Water heats more slowly and retains heat longer than many substances. For example, you know that when we sweat, we cool down. This is because the water lost through sweat carries the heat away from our bodies.

- Cohesion when water bonds to itself, where substances of the same kind are attracted to each other.

-Adhesion when water bonds to other substances other than itself. The attraction between different substances. An example is how water drops stick to a window.

-Polarity ; Water is polar, which means that its water molecules have an uneven distribution of charge. Some parts of the molecules are negatively charged, while another is positive>> has an imbalance of charges, it is attracted to ions and other polar molecules.

-Density ; Water is less dense when it is frozen. For example this is why ice floats.

-Non-polar substances do not dissolve well in water, water is polar. Polar does not mix with non-polar. 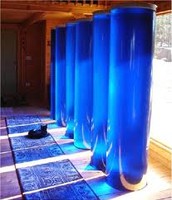 teri is using Smore newsletters to spread the word online.