Get email updates from Carissa: 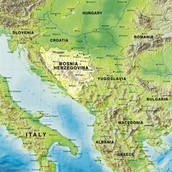 The Basnia War began in March of 1992 and ended in 1995. It took place in Bosnia-Herzegovinia. Slovenia and Croatia declared independence, and war quickly followed between Serbia and these breakaway republics. According to the research conducted by Vladimir Zerjavic, there were 220,000 victims in Bosnia-Herzegovina in the Bosnian war, of which 160,000 were Bosniaks, 30,000 Croats and 25,000 Serbs.It was the worst act of genocide since the Nazi regime’s destruction of some 6 million European Jews during World War II.

George Bush decided not to get involved militarily, but instead recognized the independence of both Slovenia and Croatia.
With the pressure of Russia, Bosnia agreed to an airlift near Tuzla to reopen for planes containing food and medicine 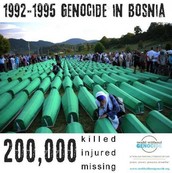 Many individuals were indicted for genocide following the war, but only one has actually been convicted by the International Criminal Tribunal for the Former Yugoslavia, a court set up to prosecute those who committed genocide.