Definition: An angiography is an x-ray recording of a bood vessel after the injection of a radiopaque substance.

Definition: Cerebrovascular means pertaining to the blood vessels of the cerebrum.

-rrhage (S) = to burst forth, bursting forth

Definition: Homorrhage means the bursting forth of blood.

Definition: A tomography is an x-ray or an ultrasound displaying a representation of a cross section through a human body.

Definition: A vasospasm is a spasm of a blood vessel.

Cerebrovascular accidents, commonly know as strokes, are caused by ceasing of blood flow to part of the brain which in turn prevents the brain from receiving oxygen (Campellone, 2014). Of all strokes, 87% are ischemic, 10% are intracerebral hemorrhage, and 3% are subarachnoid hemorrhage stroke (Timely Data Resources, Inc, 2011). Hemorrhage strokes are caused by a blood vessel in the brain weakening and then bursting open. One of the leading causes of a subarachnoid hemorrhage (SAH) is an aneurysm (Campellone, 2014). Aneurysms arise when the wall of a blood vessel in the brain weakens (Campellone, 2014). SAH caused by an aneurysm has a mortality rate of 67% (Ji & Chen). Symptoms of a stroke include a change in alertness, eyesight problems, muscle weakness in usually one side of the body, trouble speaking, and trouble walking (Campellone, 2014). Symptoms of an aneurysm include a sudden intense headache, loss of vision, vomiting, dizziness, seizures, or paralysis on one side of the body (Cedars-Sinai, 2015). 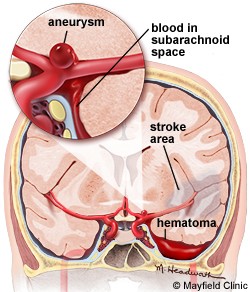 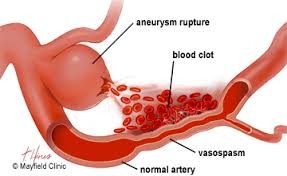 After surgery, the road to recovery from a SAH is not over. Depending on the injuries sustained, the patient may need to go through therapy to regain use of their body. Mayo Clinic lists the various therapys that could take place including strengthening motor skills, mobility training, constraint-induced therapy, and range-of motion therapy. These all deal with helping the physical body to recover. Types of cognitive therapy include therapy for communication disorders, psychological evaluation and treatment, and medications (Mayo, 2014).