Boyle's Law--As the volume of a gas increases the pressure of the gas will decrease. Making this an inverse relationship.

Charles's Law-- As the volume of a gas increases the pressure of the gas will also increase, making this a direct relationship.

Dalton's Law--The amount of pressure released by a mixture of gases is equal to sum of particle pressure of the gases.

Henry's Law--The amount of gas dissolved in a liquid is equal to the partial pressure of that gas in equilibrium with that liquid. 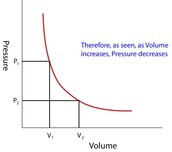 "The Bends"--- Also known as Decompression Sickness, this happens to scuba divers or those who are exposed to altitude change. Symptoms may include fatigue, itching, The Chokes, inflammation of the lymph nodes, pain, staggers and the most common is Musculoskeletal Symptoms. Treating it consists of high- flow oxygen and IV fluids. Even having to go into a hyperbaric chamber for re compression. Boyle's Law is what is present during this condition.

Air Embolisms--- A very rare case when their is air bubbles in your blood vessels or heart. So there for their is a blockage. Symptoms include struggles with breathing, chest pain, and confusion. Once again treatments require a high pressure chamber to remove oxygen from blood stream. If not taken care of, you are at risk for heart attack, stroke or repository failure. Boyle's Law is also present during this condition.

Oxygen Toxicity--- Once again this is a concern for underwater divers. People on high amounts of oxygen can be at risk for breathing increases partial pressure of oxygen. Causing them to develop hyperoxia which is the excess oxygen in body tissues. The longer you are exposed to this, the worse the symptoms can be. Just 6 minutes can cause vertigo and severe nausea. Exposed to 96 minutes prolonged dazzle and severe vomiting. Avoiding being in oxygen pressure at or below 1.2 ATA is the best way to not get oxygen toxicity. This also includes Boyle's law. 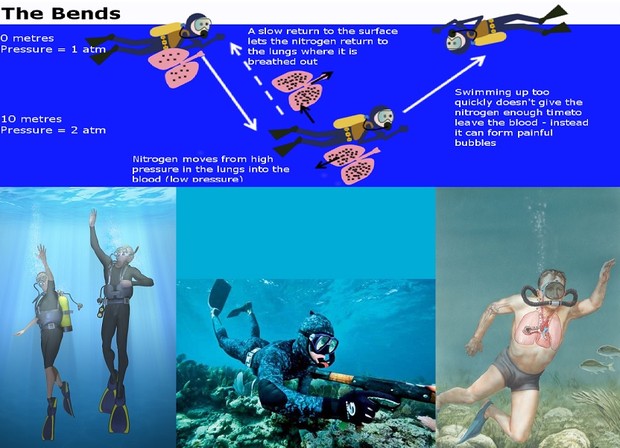