katerina is using Smore newsletters to spread the word online.

Get email updates from katerina: 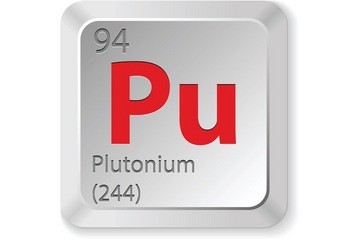 Plutonium was discovered in 1940/1941 by Glenn T. Seaborg, Edwin MMcMillan, J.W. Kennedy and A.C. Wahl at the University of California at Berkeley. Seaborg submitted the discovery but he was withdrawn because it was discovered that an isotope of plutonium could undergo nuclear fission, which could be useful in creating an atomic bomb. And because it was the middle of world war Il, it wouldn't be wise to publish the discovery. So the discovery was published when world war ll ended. When Glenn T. Seaborg, Edwin M. McMillan, J.W. Kennedy and A.C Wahl discovered the element, they bombarded an isotope of uranium with deuterons that had been accelerated in a device called a cyclotron. This created neptunium and two free neutrons. Because neptunium has a half life of 2.1 days, neptunium decayed into plutonium.

The element and the metal

Freshly prepared plutonium metal has a bright silvery color, but when oxidized in air, it has a dull grey, yellow or olive green color. Plutonium is radioactive. Plutonium is sometimes described as the most toxic element known. Tiny particles of plutonium on the order of micrograms can cause lung cancer if inhaled into the lungs. Because plutonium has no gamma radiation, health problems are not likely to occur while working with plutonium as long as it is not breathed in or swallowed. The metal quickly dissolves in concentrated mineral acids. A large piece of plutonium is quite warm because of the energy given off by alpha decay. At room temperature, alpha-form plutonium is really hard and solid. Unlike most metals, plutonium is not a good conductor of heat or electricity. Plutonium metal usually has six allotropes or crystal structures; alpha (α), beta (β), gamma (γ), delta (δ), delta prime (δ') and epsilon (ε). They have similar energy levels, but their densities and crystal structures are very different. Plutonium can form alloys and compounds with most other metals. Plutonium is a radiological hazard and must be handled with specialized equipment and precautions. It was found out that a few milligrams of plutonium per kilogram of tissue are lethal. Plutonium metal is missing magnetism because of the odd and insane behavior of the electrons in the element's outer shell. 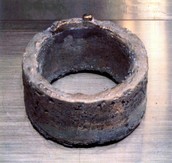 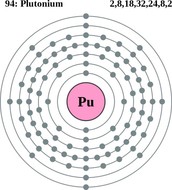 Though plutonium is synthetically produced, it was confirmed that the isotope 244Pu is present in nature. 244Pu has a half-life of about 80 million years.

Plutonium is mostly used as an explosive ingredient in nuclear weapons. Fission of a kilogram of 239Pu can produce an explosion as big as 21,000 tons of TNT. Because of its high-heat production rate and long half-life of 88 years, plutonium can be used as a heat source in radioisotope thermoelectric generators (to power spacecraft and extraterrestrial rovers). But it also possible to use plutonium in peaceful ways. There is a PUREX chemical process that extracts plutonium and uranium from spent nuclear fuel for reusing in nuclear power reactors.

Plutonium has 23 known isotopes. Isotopes are the number of nucleons (both protons and neutrons) in the nucleus is the atom's mass number. All of the isotopes are radioactive and are all about in mass from 228 to 247. Most of the isotopes have half-lives less than 7,000 years.

It's Elemental - The Element Plutonium

www.livescience.com
Properties, sources and uses of the element plutonium.

katerina is using Smore newsletters to spread the word online.

Follow katerina mat
Contact katerina mat
Embed code is for website/blog and not email. To embed your newsletter in a Mass Notification System, click HERE to see how or reach out to support@smore.com