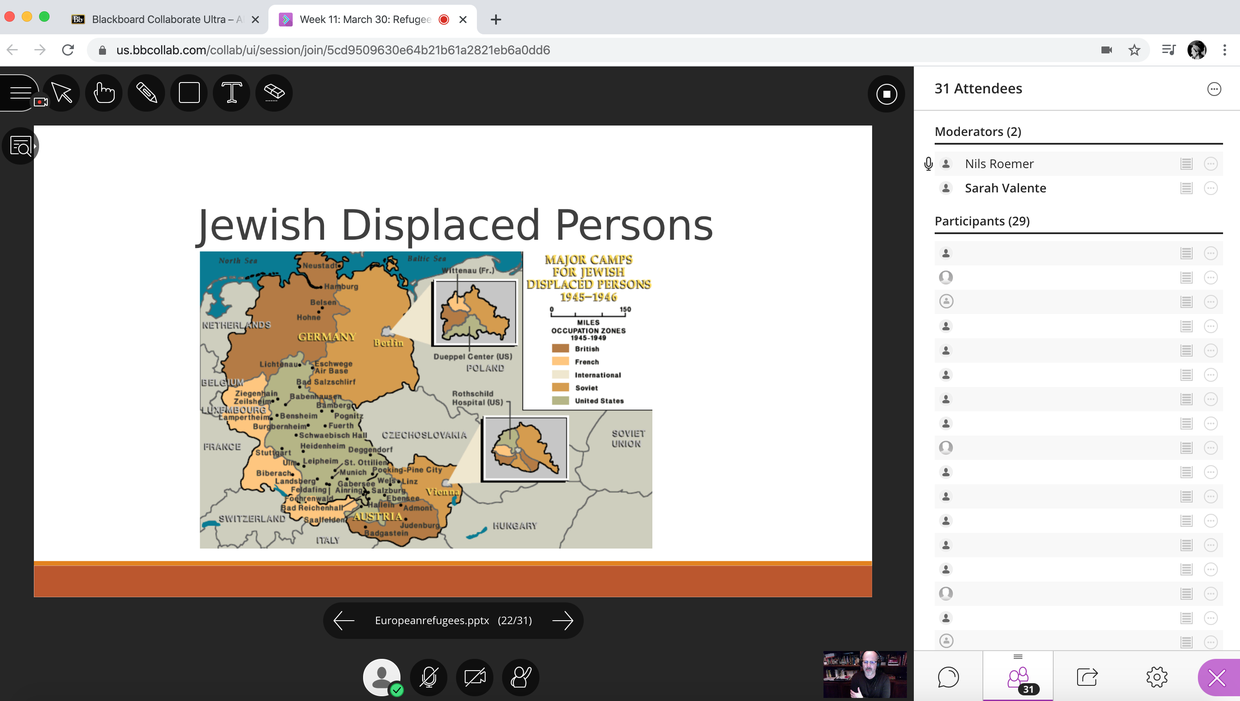 After an extended Spring Break, all classes resumed in an online-only format on March 30th. The University made this decision because, as President Richard C. Benson said in his March 12th statement, "There is no higher priority than the safety and welfare of our UT Dallas community."

Faculty and staff used the two-week long Spring Break to prepare for this transition, which was made possible because of the existing resources in place and extensive training made available by the University.

PhD student Chrissy Stanford remarked: "I wasn't sure what to expect, but our professors and university staff and faculty have done a wonderful job of keeping in contact with the students and making the transition to online classes stress-free and engaging." Ms. Stanford is referring to communication issued from every level of the University, including this special message from Ackerman Center director, Dr. Nils Roemer, on March 20th.

The Ackerman Center professors and lecturers were back to teaching as scheduled when Spring Break was over, and they adjusted to the new format with their students. Dr. Debbie Pfister commented, "While the students have said that they miss the in-person classes, they have been great about adapting to the new situation. We continue to have lively discussions about course material (although a bit delayed because of technology) and they are still very much engaged. We all, however, are looking forward to resuming normal life as soon as possible.”

Dr. Roemer, who is also the Interim Dean of the School of Arts and Humanities, has this message: "The Ackerman Center has adjusted exceptionally well to the need for social distancing and remote learning. Our teaching proceeds, our lectures continue and we have hosted already larger public events. We obviously can't wait to return to our offices and to see our students, friends, and faculty again. Make sure to be safe and follow us on Facebook or email us to stay connected."

Per President Benson and Provost Musselman, all summer classes will also be held online. You can read Dr. Benson and Dr. Musselman's statements by clicking on their names.

"In these difficult times, we are also learning new things that will help us in the future with our mission of Teaching the Past and Changing the Future," Dr. Roemer says. 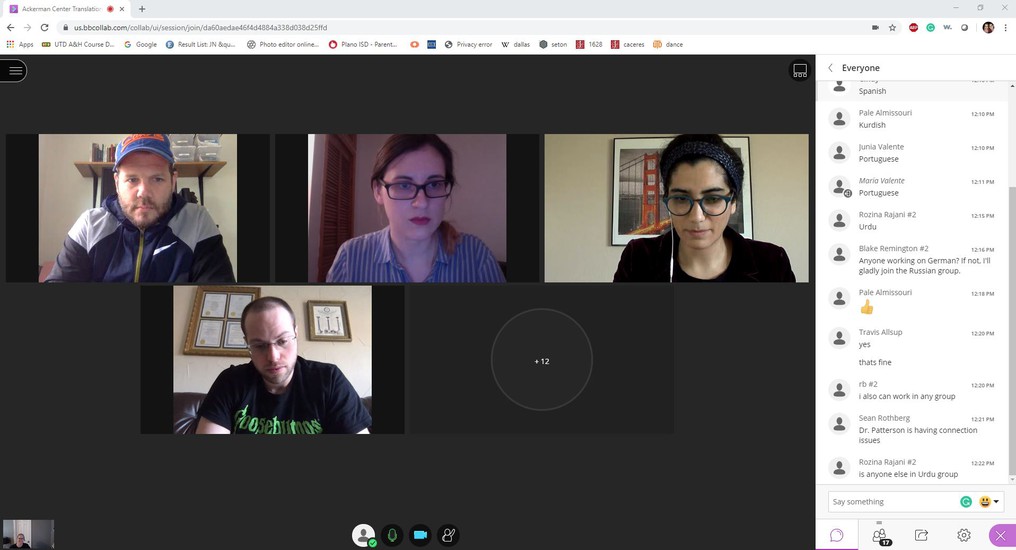 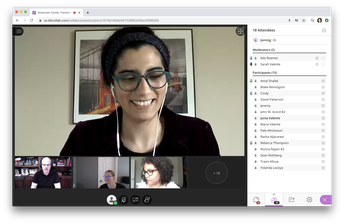 The aim of the workshop was to translate Miklós Radnóti’s “Letter to My Wife” into as many languages as possible. The poem was originally translated from Hungarian to English by Dr. Zsuzsanna Ozsváth, the Leah and Paul Lewis Chair in Holocaust Studies, and Professor Fred Turner, in their bilingual publication Foamy Sky: The Major Poems of Miklós Radnóti (Corvina, 1992).

Miklós Radnóti (1909-1944), the renowned Hungarian poet, was taken as a Jewish slave laborer from Hungary to Yugoslavia in 1944 and then walked back to Hungary in a death march. When he and the other prisoners arrived in Hungary, they were completely starving, could no longer walk, and were shot into a mass grave. One and a half years later, Radnóti’s body was found. A little notebook was found in the pocket of his raincoat, which contained his last ten poems. “Letter to My Wife” is one of these poems.

“A few weeks ago, Dr. Ozsváth and I selected this poem for the workshop in large part for its musical and rhythmic qualities, as well as Radnóti’s clear poetic witness to the Holocaust as it was unfolding,” stated Dr. Valente.

During the virtual translation workshop, participants were placed into breakout groups, where they could interact directly and work with one another in their respective languages, including Arabic, Farsi, French, German, Hebrew, Kurdish, Portuguese, Spanish, and Urdu.

“It was fantastic to host the translation workshop, even if in a slightly different format from previous years. Since 2016, we have done translation workshops at the Center, with great results that we proudly showcase at our annual Yom HaShoah (Holocaust Remembrance Day) commemoration,” said Dr. Valente. “It is important to continue with this beloved Ackerman Center tradition, especially now that we are all physically isolated from one another, and to engage with our students, faculty, and friends of the Center, who are excited to join in our translation efforts.”

The resulting multilingual translations will be featured during our upcoming virtual Holocaust Remembrance Day on April 21, 2020. 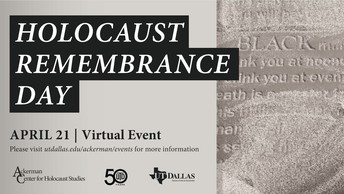 If you would like to be a part of our virtual Holocaust Remembrance Day event, we welcome faculty, staff, students, and members of the community to participate in any language, including English. Please email cynthia.rogers@utdallas.edu for more information. 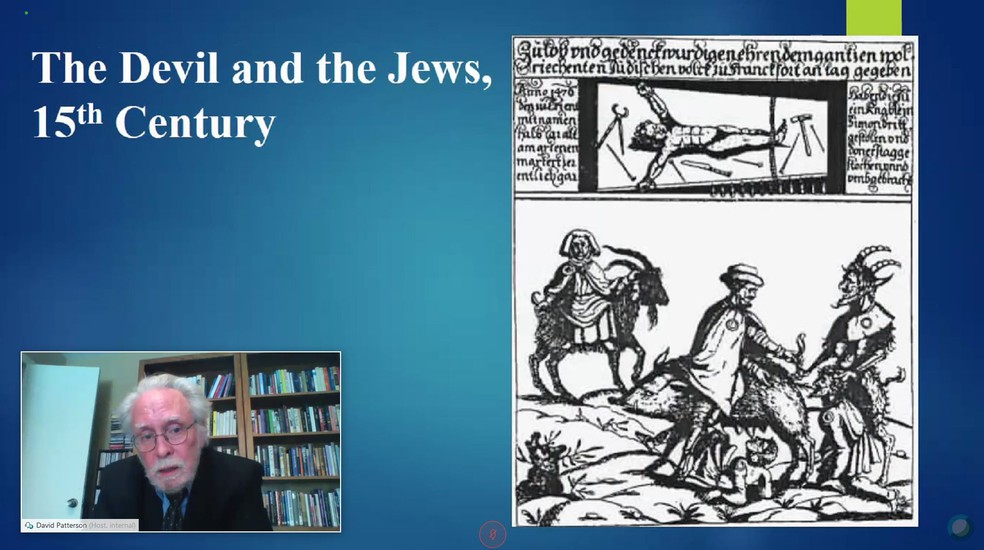 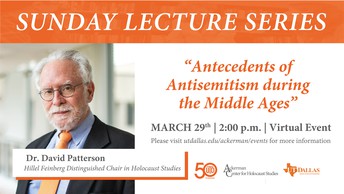 Dr. David Patterson, Hillel A. Feinberg Distinguished Chair in Holocaust Studies, kicked-off our annual Spring Lecture Series on March 29 with a presentation titled “Antecedents of Antisemitism during the Middle Ages.”

Though our current quarantine necessitated that the lecture be held virtually, 87 people attended online via the video conferencing tool WebEx.

Dr. Nils Roemer, Interim Dean of the School of Arts and Humanities, Director of the Ackerman Center and Stan and Barbara Rabin Professor in Holocaust Studies, welcomed attendees and introduced Dr. Patterson, who lectured for an hour before answering questions from viewers.

Dr. Patterson explained that Antisemitism among Christians and Muslims emerged very early in the formation of both religions. He focused particularly on Christian manifestations of Antisemitism during the Middle Ages, such as The Rhineland Massacres during the First Crusade in 1096, which took place after Pope Urban II promised that anyone who killed a Jew would have his sin forgiven. This resulted in “extensive massacres of Jews before [the Crusaders] ever got to Jerusalem.” Once they arrived in the Holy Land,” Patterson explained, “Jews were gathered into synagogues and burned.”

A little more than a century later, in 1215, Pope Innocent III issued a degree during the Fourth Lateran Council ordering the wearing of yellow badges to identify Jews, a practice that was centuries later adopted by the Nazis.

According to Dr. Patterson, Jews were blamed in the 14th century for the Black Death that decimated the population of Europe. “Jews were not dying at the same rate as Christians because Jewish law required a particular washing of hands when waking, before eating, before prayer, when handling holy books… and Jews were meticulous about disposal of human waste. So, they weren’t dying in the same numbers and were blamed for the contagion.”

Jews who had converted to Christianity were also burned alive for the heresy of Judaizing during the Spanish Inquisitions between 1478-1834, because “there was something in the blood that could not be cleansed.” Dr. Patterson told viewers that “the burnings were not about punishment, but salvation; it was purification. The one who lit the fire would give the Jew an opportunity to accept Jesus. If he did, he could be shown the mercy of being strangled to death before being burned.”

During the question and answer session that followed his lecture, Dr. Patterson emphasized that, in some instances, the best way to address Antisemites is simply to “not engage in debate because it legitimizes their position. There is no intellectual engagement with someone whose point of view is driven by hatred. The purpose of propaganda is not to inform or persuade. In Hitler’s own words, the purpose is to incite wrathful hatred.” 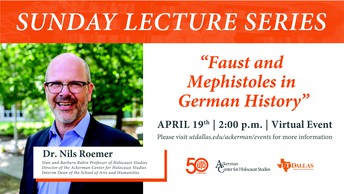 Don't miss our next lecture of the series:

“Faust and Mephistoles in German History”

If you do not have Cisco WebEx installed, it may prompt you to do so.