I was born on August 2nd, 1996 in Brooklyn, New York. When i was about three months old my parents decided to move back to Mexico. I lived there until i was about three years old. My parents decided that they would not take me and my brothers chances of having a good education so, we moved back to New York. Later on my dad's job relocated him to New Jersey and we moved there for about three years. After those three years my dad was once again relocated, this time to Pennsylvania. I grew up mostly in Pennsylvania. I liked Pennsylvania most of all. When i was 10 years old my dad was sent to Clinton, North Carolina. My family did not like that town at all! We eventually moved here after we came to visit a cousin and we liked it. I have attend in North Carolina, Shuford Elementary, Newton-Conover Middle School, and I am currently attending my junior year at Newton-Conover High School.

I will graduate from High School and receive my diploma. I plan to attend Duke University after graduating. I will study Medicine at Duke and become a General Doctor.
Get Directions

After graduating from Duke University i moved back up north to New York. I got a job opportunity at Flushing Hospital in New York where i was born. I was employed as a General Doctor.
Get Directions

The President of the United States went back to New York where he was from the weekend after his inauguration. He went to give a speech in Queens to thank everybody who voted him. As he was giving his speech he had a stroke and was rushed to the Flushing Hospital. I was called in and i saved his life.
Get Directions

I graduated from High School as an Honor Student. I got accepted into Duke University.

I got a job opportunity at the Flushing Hospital in Queens, New York.

I saved the president's life after he had a stroke giving a speech in Queens, New York. 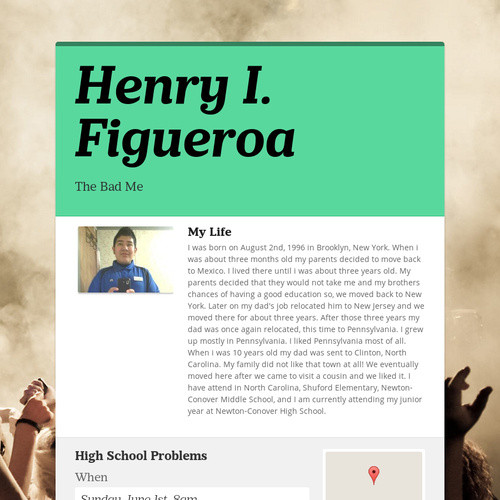 smore.com
I was born on August 2nd, 1996 in Brooklyn, New York. When i was about three months old my parents decided to move back to Mexico. I...

Follow Henry Figueroa
Contact Henry Figueroa
Embed code is for website/blog and not email. To embed your newsletter in a Mass Notification System, click HERE to see how or reach out to support@smore.com
close