Get email updates from Chrissy:

This project was made out of coils, and I created it because I wanted a simple vase with tribal designs. The problems that I had with this was creating the coils. I had to remain patients, and if I made a bad one scrap it and made a pretty, new one and not settle for a bad one. If I could change something I would change one of the sides of the vase because it bulges out more than the other side.

I created this project because I think pinch pots are really cute and I wanted one. When I was creating this I had problems with the smoothness of it. I had to be patient and work out all the lumps from the pinches slowly, one-by-one. If I could change something I would change the bottom of it because I sits slightly lop-sided due to the bottom. 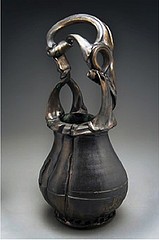 This piece is a pot that has abstract figures attached to the top of it. The color of it makes it looks like a sort of metal giving it a distinct look. The pot may have been made of coils. It has scrapes across it for more effect. The elements and principles that contibute to this are shape and color. The color because it has a distinct look because it looks metal and shape because it is also very different due to the abstract look on top but is also a simple pot on the bottom. It is arranged with a nomal pot on bottom an abstract work on top. The artist is probably from a fairly modern time because it looks like a piece of modern art. The figure on top resembles a dragon to me although I think he was just having fun making a different handle. The mood seems rather dark because of its colors and form. I think it is successful because it is very unique and I have not seen a piece like it. A lot of people like that about artwork. It looks really nice as well and has a cool color.

This piece is simply a man. It looks like he is in some sort of trouble because his hands are behind his back, and he is looking down. He is wearing little clothing. He has really good muscles. The elements and principles that contribute to this piece are form and texture. It is arranged simple with a man on a base and something behind him. I think that this piece is of a slave. He looks like he has been working a lot due to his muscles and he looks sad. He wants to be free. I think this is successful because it is deep and tells a lot in this simple piece.